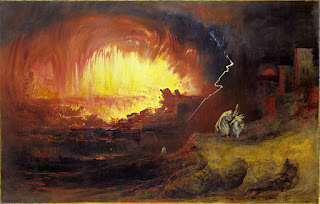 
Among St. Peter Damian’s most famous writings is his lengthy treatise, Letter 31, the Book of Gomorrah (Liber Gomorrhianus), containing the most extensive treatment and condemnation by any Church Father of clerical pederasty and homosexual practices. His manly discourse on the vice of sodomy in general and clerical homosexuality and pederasty in particular, is written in a plain and forthright style that makes it quite readable and easy to understand.
In keeping with traditional Church teachings handed down from the time of the Apostles, he holds that all homosexual acts are crimes against Nature and therefore crimes against God who is the author of Nature.
… Damian decries the audacity of men who are “habituated to the filth of this festering disease,” and yet dare to present themselves for holy orders, or if already ordained, remain in office. Was it not for such crimes that Almighty God destroyed Sodom and Gomorrah, and slew Onan for deliberately spilling his seed on the ground? he asks. Quoting St. Paul’s letter to the Ephesians (Eph 5:5) he continues, “… if an unclean man has no inheritance at all in Heaven, how can he be so arrogant as to presume a position of honor in the Church, which is surely the kingdom of God?” [15]
… According to Damian, the vice of sodomy “surpasses the enormity of all others,” because:

“Without fail, it brings death to the body and destruction to the soul. It pollutes the flesh, extinguishes the light of the mind, expels the Holy Spirit from the temple of the human heart, and gives entrance to the devil, the stimulator of lust. It leads to error, totally removes truth from the deluded mind … It opens up hell and closes the gates of paradise … It is this vice that violates temperance, slays modesty, strangles chastity, and slaughters virginity … It defiles all things, sullies all things, pollutes all things …
“This vice excludes a man from the assembled choir of the Church … it separates the soul from God to associate it with demons…. Unmindful of God, he also forgets his own identity. This disease erodes the foundation of faith, saps the vitality of hope, dissolves the bond of love. It makes way with justice, demolishes fortitude, removes temperance, and blunts the edge of prudence.

As the Sacred Scripture says, the Sodomites were wicked and exceedingly sinful. Saint Peter and Saint Paul condemn this nefarious and depraved sin. In fact, the Scripture denounces this enormous indecency thus: ‘The scandal of Sodomites and Gomorrhans has multiplied and their sins have become grave beyond measure.’ So the angels said to just Lot, who totally abhorred the depravity of the Sodomites: ‘Let us leave this city….’ Holy Scripture does not fail to mention the causes that led the Sodomites, and can also lead others, to this most grievous sin. In fact, in Ezechiel we read: ‘Behold this was the iniquity of Sodom: pride, fullness of bread, and abundance, and the idleness of her, and of her daughters: and they did not put forth their hand to the needy, and the poor. And they were lifted up, and committed abominations before me; and I took them away as thou hast seen’ (Ezech. 16: 49-50). Those unashamed of violating divine and natural law are slaves of this never sufficiently execrated depravity.” (Emphasis added)

But they act in a contrary way, for they come full of impurity to this mystery, and not only of that impurity to which, through the fragility of your weak nature, you are all naturally inclined (although reason, when free will permits, can quiet the rebellion of nature), but these wretches not only do not bridle this fragility, but do worse, committing that accursed sin against nature, and as blind and fools, with the light of their intellect darkened, they do not know the stench and misery in which they are. It is not only that this sin stinks before me, who am the Supreme and Eternal Truth, it does indeed displease me so much and I hold it in such abomination that for it alone I buried five cities by a divine judgment, my divine justice being no longer able to endure it. This sin not only displeases me as I have said, but also the devils whom these wretches have made their masters. Not that the evil displeases them because they like anything good, but because their nature was originally angelic, and their angelic nature causes them to loathe the sight of the actual commission of this enormous sin.

“Just as people participate in the glory of God in different degrees, so also in hell some suffer more than others. He who lived with this vice of sodomy suffers more than another, for this is the greatest sin.”