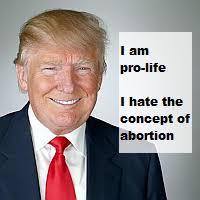 Donald Trump is the most pro-life president in American history

It’s been a year since the “Election of the Century,” and political pundits everywhere are assessing President Donald Trump’s performance thus far.
Pro-lifers are evaluating Trump, too.  Their verdict so far?  He perhaps overreached in his campaign promises (what politician hasn’t?), but “The Donald” is the most pro-life, pro-marriage, and pro-family president in the history of the republic.
“President Trump has been the most pro-life president in modern history,” Concerned Women for America’s Penny Nance flatly told Breitbart News.
Even “Never Trumpers,” like Susan B. Anthony List’s Marjorie Dannenfelser, have come around after the fearless chief executive’s repeated --almost incessant, to the consternation of pro-abortionists-- pro-life appointments, constitutionalist nominations, and religious freedom executive orders.
“When it comes down to actually getting concrete policy done, you couldn’t ask for a better White House,” Dannenfelser told the Hill.  “It’s far more solidly committed to the life issue than any other White House has been.”
The list of Trump uncompromisingly pro-life appointments is so long that it would far shorter to list RINO appointments.  From Vice President (former Gov.) Mike Pence (whose very active, very welcome role is uncommon in modern politics), Attorney General (former Sen.) Jeff Sessions, HHS Secretary (former Sen.) Tom Price (later forced out by a ruthless liberal smear campaign), Presidential Counselor Kellyanne Conway and Chief of Staff Reince Priebus (later fired via an internal smear campaign), to U.N. Ambassador (former Gov.) Nikki Haley and HUD Secretary Dr. Ben Carson, Trump has stacked the cabinet deck with solid, unquestionably pro-life leaders.

And not just his top cabinet, but right on down to government officials at every level, Trump exceeded everybody’s pro-life expectations.  From Dr. Charmaine Yoest (as an HHS Assistant Secretary) and Roger Severino (to head the HHS’ Office of Civil Rights) to (former Gov.) Sam Brownback, Teresa Manning, Shannon Royce, Valerie Huber, Mark Green (who withdrew under liberal assaults), Bethany Kozma, Ryan Zinke, and Sean Spicer (who later resigned over a liberal appointment’s machinations).
From the start, it was clear that Trump may have exaggerated his abilities, but he really meant it when he said he was pro-life.
In fact, as so many other true conservatives have pointed out, the main obstructionists to an all-out pro-life, pro-marriage, and pro-family agenda sweeping the nation have been establishment Republicans already in position before the Trump juggernaut.
And although his judicial nominees have been subject to prolonged delay by Democrats --a legitimate tactic with a lame duck president in the hopes of opposing party takeover but not with a newly-elected one-- no prolifer could quibble with his picks.  The foremost nod, of course, being originalist and common-sense champion in an age of moral insanity Neil Gorsuch to the nation’s top bench.
Then there’s Trump’s executive actions, decisions, and orders.  His first day in office, Trump not only reinstated Reagan/Bush One/Bush Two’s Mexico City Policy thwarting tax dollars being funneled to abortion providers worldwide, he greatly expanded it --forever making Planned Parenthood his arch-enemy-- to ensure no American money murdered foreign babies.
On many Obama-instigated perversion fronts, Trump stepped into the gap like Moses in the wilderness to halt the Culture of Death Plague.
Trump’s withdrawal from the Paris Climate Agreement was perhaps his most gutsy move.  The global warming movement had long been a pro-abortion tool, a front for promoting mass baby-killing by economic coercion worldwide.  Our president literally stood Lone Ranger against a global coalition of world leaders pressuring him to give in to Obama concessions that not only were bad for the United States economically, but represented “an international assault on Christian civilization.”
Exiting the Paris Climate Agreement demonstrated that like no other president before him, Trump has the wherewithal and the guts to do the right thing regardless of the political consequences.
“On the life issues, Trump has proven to be more of a doer than almost everyone expected,” Life Site News founder Steve Jalsevac admitted.
While prolifers should always focus on a politician’s deeds, not rhetoric, words do have power, especially the words of the President of the United States.  Trump has done more than his share of semantic morale boosting.  When he called out the mainstream media for 44 years of failing to the cover the annual March for Life (and lying about it), his open shaming resulted in 37 times more coverage in 2017 than in 2016.  He also sent Vice President Pence and counselor Kellyanne Conway to the shear delight of march participants.
Trump’s words in June to the United Nations that abortion is not “family planning” helped expose to the world that body’s destructive agenda-driven verbal gymnastics for the wolf-in-sheep’s-clothing it is.  And just this month the president’s words were deeply significant when he demolished pro-abortion’s most falsely “compassionate” argument by declaring that adoption means “no child in America is unwanted.”
After the president’s powerful speeches in Poland and to the U.N., which easily rival anything J.F.K. ever recited and compare favorably with Abraham Lincoln’s timeless addresses, Jalsevac, a life long pro-life activist, concluded Trump has proven “a much more capable conservative statesman than most thought he could ever be.”
Trump disappointments
There have been disappointments.  Bitter ones.  Trump attempted numerous times to de-tax fund Planned Parenthood’s over half a billion dollar subsidy, but was stopped by RINOs like John McCain, better known to prolifers as the Twenty-First Century’s Benedict Arnold.  Ditto all attempts to rescind or just replace ObamaCare.
His pick of Exxon-Mobil CEO Rex Tillerson, who homosexualized the Boy Scouts, as Secretary of State was a devastating signal that the Obama/Clinton State Department’s relentless campaign of pushing child murder as female “empowerment” and shoving sodomy on unwilling nations’ constitutions may continue indefinitely.
Another bad appointment was self-described “gay rights activist” Anthony Scaramucci as presidential adviser and later as communications director.  Thankfully, Scaramucci's tenure was very brief and he was fired, but not until he inflicted severe damage to the Trump administration in disenfranchising Priebus and Spicer.
The president kept Obama’s “LGBT International Envoy,” homosexual activist Randy Berry, which resulted in the U.S. pushing for international recognition of sodomic relations at the Human Rights Council. However, there have been indications that Berry's role in the administration has recently changed.
And Trump has, under the influence of his daughter Ivanka, her husband Jared Kushner and others, made some harmful decisions.
Despite these serious mistakes, President Trump has begun to turn the cultural tide from hedonistic death toward sanity, hope, and life.
One year ago, Catholic Cardinal Raymond Burke discerned that the stunning Trump electoral victory was a sign America had “awakened” to its moral crisis.  Despite many pro-life leaders’ doubts, Burke predicted the election was a victory for the sanctity of innocent human life.
Even pro-abortionists begrudgingly agree with the Cardinal’s assessment.  Planned Parenthood President Cecile Richards says the Trump administration has already done more to set back the nation’s largest abortion provider than any other president in Planned Parenthood’s history.
Priests for Life’s Father Frank Pavone praised Trump’s “very measurable and tangible executive actions to advance the rights of the unborn.”  However, Fr. Pavone claims Trump’s greatest pro-life feat was not an appointment, nomination, or executive order.
“The most powerful thing he has accomplished for the pro-life movement is that he kept Hillary Clinton out of the White House,” Pavone said.