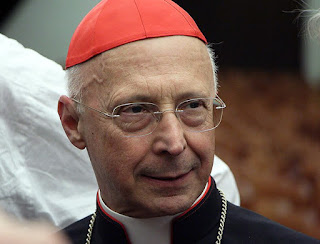 
Cardinal Bagnasco Cancels Prayers of Reparation for ‘Gay Pride’ Parade
The archbishop of Genoa, Italy, reportedly considers such prayer services “inappropriate” but allows “anti-homophobic vigils” to take place in his archdiocese.
Edward Pentin
Cardinal Angelo Bagnasco of Genoa surprisingly decided last week to cancel three separate public prayers of reparation for a “gay pride” parade scheduled to take place in the northern Italian city.
The instruction to cancel the prayers, first reported on the Italian blog MessainLatino, came from his auxiliary Bishop Nicolo Anselmi.
According to the Italian Catholic daily La Nuova Bussola Quotidiana, Bishop Anselmi told the three parish priests in question by phone that Cardinal Bagnasco considered the initiatives “inappropriate.”
The Rosary and Eucharistic Adoration were to have been offered in three Genoa churches over three days, June 13-15, to coincide with the parade taking place in the city on June 15.
But the day before the first prayer of reparation was to have taken place, an instruction from the archdiocesan curia was issued asking the priests of those churches to cancel the planned moments of prayer.
"We are sorry to have to inform you that the diocesan curia of Genoa has asked priests and Church leaders indicated below to cancel moments of planned public prayer reparation,” read a statement issued on the web page of Santo Rosario in Italia, an organization coordinating prayers of reparation across Italy.
“We therefore invite the faithful interested in the prayer of reparation to pray elsewhere in spiritual communion,” it added.
Over the weekend, the Register asked Cardinal Bagnasco, a former president of the Italian bishops’ conference who serves as president of the Council of European Bishops’ Conferences, why he took the decision.
But the cardinal, 76, who some consider a possible future pope, did not respond. Neither did Bishop Anselmi whose secretary told La Nuova Bussola Quotidiana’s Andrea Zambrano that the bishop was “busy all day in a meeting and cannot be disturbed or left messages.”
...
Writing in La Nuova, Zambrano said this is the authentic Catholic response showing why reparation is needed rather than the other which is merely a “bowing of the head in the face of a threatening power that has a big and intimidating voice.”
Pope St. John Paul II condemned a “gay pride” parade in Rome in 2000, saying he felt “deep sadness” at “the offense to the Christian values of a city that is so dear to the hearts of Catholics throughout the world.”
“The Church cannot be silent about the truth, because she would fail in her fidelity to God the Creator and would not help to distinguish good from evil,” he said at a July 9 Angelus, before quoting from the Church’s teaching in the Catechism on homosexuality and homosexual acts.
Postado por Pedro Erik às 15:30

Somos a Igreja do diálogo!

Somos a Igreja do diálogo e do amor.