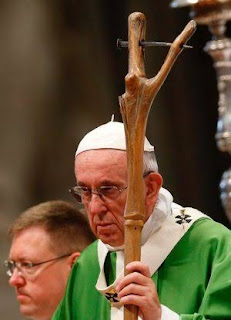 Philosopher Professor John Rist, one of the original 19 signatories of the “Open Letter”, told LifeSiteNews by email today that he expected that there would be “little support even among conservatives” for the initiative.
“In the present situation there is no need for the Bergoglians to say much; their work is being done for them by those who should be the friends of the letter writers. Often they are making rather bureaucratic suggestions rather than facing the real issues in the Church, such as that one of the reasons I signed the letter was because it renewed the ignored plea of the dubia cardinals for 'clarification'.”
Rist believes that commentators are “merely evading the issue” when they concentrate on the canonical accuracy of the Open Letter’s charge against Pope Francis or the number of canonists or scholars with doctorates in theology on the list.


“On that last point, in view of the present situation in theology generally, having more people with doctorates might have been a positive disadvantage,” Rist said.
“What has happened, I think, is that these commentators have used feeble objections on minor points to avoid the main issue,” he continued.
‘This perhaps could be summed up by my view that [Pope] Bergoglio wants to transform the Church into a mildly spiritually flavoured NGO.”
Dr. Peter Kwasniewski, one of the original Open Letter signers, defended his action, stating in an article that the document provides “furnishes clear evidence of heretical (not just erroneous) statements that may be found in the approved writings of Pope Francis, as well as evidence—in the form of repeated acts and omissions of governance—that he is fully aware of what he is promoting.”

“Many people have been asking: What’s the good of taking a step like this? Will it not further polarize the situation? Will it not offer excuses to the Bergoglio party to intensify their confinement and persecution of Catholics? Is it not overwhelmingly likely to be ignored? Can anyone do anything about a wayward pope—mustn’t we just wait until God sorts it out for us? And besides, aren’t the signatories lacking in sufficient theological qualifications,” he writes.
In answer to these questions, Kwasniewski provides three reasons why the document is “good and valuable.”
Signing the document is a “step we take before God, as a testimony of our conscience,” he wrote.

“Perhaps there are others who can sleep like babes without raising a voice of protest to the autodemolition of the Faith and the misleading of countless souls; who see what the Pope is saying and doing, but who shrug their shoulders and figure that it won’t redound to lasting damage. I am not such a person, and I think the same is true of the other signatories,” he added.
“From those to whom more has been given, more will be expected. If we have been given to see a wolf in shepherd’s clothing, we are expected to do something about it. We will cry “Wolf!” to the vulnerable sheep, and pray fervently that other true shepherds will come to the rescue, in ways that we cannot. If they fail to do so, that is not our problem, but theirs to answer for,” he said.