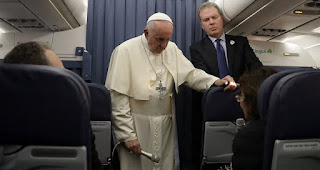 How the media are covering up for Pope Francis

It’s depressing to see the media – both Catholic and secular – shielding Pope Francis from the explosive allegation made by his own former nuncio to the United States, that he knowingly covered up for and revived the career of serial gay predator Cardinal Theodore McCarrick.
Archbishop Carlo Maria Viganò, in testimony published on Saturday, says he personally told Francis in 2013 that McCarrick, retired Archbishop of Washington, had ‘corrupted generations of seminarians and priests’.
The Pope shrugged this off, says Viganò, and went on to lift canonical sanctions placed on McCarrick by Benedict XVI. McCarrick was his close ally – as was retired Cardinal Danneels of Belgium, who had concealed incestuous abuse by one of his bishops. Fully aware of this, Francis invited Danneels to a synod on the family – something that didn’t trouble the Pope’s most fanatical supporters in the media, known as ‘Team Francis’. It still doesn’t bother them.
Confronted by these new grave and credible charges against the Pope, members of Team Francis writing in the liberal National Catholic Reporter, the Tablet and America magazine have desperately sought to discredit Viganò.
They’ve had very limited success. Yes, the former nuncio is an ideological opponent of Francis; assisted by fellow conservatives, he timed his statement in order to cause maximum embarrassment to the pontiff. Also, it appears that Benedict’s sanctions against McCarrick were delayed, ineffective and flouted.
But we know that the old cardinal was forced out of the seminary where he was living, and on the orders of Benedict. That may be as far as the sanctions went. It wouldn’t surprise me if McCarrick’s continued insubordination – supported by fellow cardinals aware of his dirty reputation – played a part in Benedict’s decision to resign the papacy in despair.
The evasive coverage of this scandal by Team Francis hardliners is impossible to justify. Certain ‘reporters’ should ask themselves whether they have become complicit in concealing sexual abuse.
Meanwhile, most of the secular media – now almost bereft of religion specialists – are lazily clinging to the narrative of Francis as a ‘Great Reformer’.
He is nothing of the sort. He’s a man whose ruthless and cynical modus operandi was well known in Argentina before he was elected pope. (I urge everyone to read the book The Dictator Pope by Henry Sire, which gives chapter and verse.) Note that Francis has not set foot in his home country since leaving for the 2013 conclave. He dare not: he has too many enemies there.
...
Liberal Catholics and the mainstream media are misleading us on two crucial points:
1. Viganò’s motives in releasing the testimony are fundamentally irrelevant. We need to know whether his claims are true. Did Francis ignore what Viganò told him about McCarrick – which, let us not forget, was the truth? I reckon he did, but then I’ve long been convinced that this Pope is prepared to overlook all manner of offences so long as the offender is useful to him. Read my blog post about the shady papal confidant Cardinal Oscar Maradiaga of Honduras, whom Francis declared innocent before the investigation of allegations of financial wrongdoing had even begun.
2. The reputations of John Paul II, Benedict XVI and Francis have all been damaged by the McCarrick scandal. John Paul made McCarrick Archbishop of Washington and a cardinal even though he was already widely rumoured to be a predator – and his previous archdiocese of Newark had paid money to adultsclaiming that they had been sexually assaulted. Benedict acted very late in the day against McCarrick, after the latter’s retirement, and his low-key canonical sanctions amounted to very little. Francis, however, is credibly accused of a far greater degree of complicity in McCarrick’s crimes. If the head of any other organisation were guilty of such complicity, he or she would not only be forced to resign but could also end up in the dock. Team Francis must understand this. To their eternal disgrace, and helped by ignorant secular news outlets, they want to make sure that the public doesn’t understand it and continues to believe in Francis the Reformer. Who does not exist.
Postado por Pedro Erik às 15:12