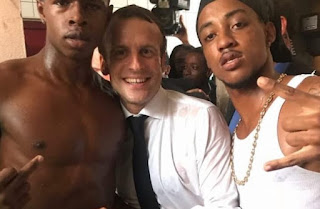 How low can he go? Macron ridicules himself and France during state visit

By ABDELHAMID KADDOUR  1 October 2018
In a visit to Saint-Martin, an island of the Antilles, France’s head of state made a mockery of the office of the president.
Again the French public is angry with Emmanuel Macron after he posed for photos with young men at Saint Martin, one of whom showed the middle finger to the cameras.
The controversial pictures were taken during Macron’s visit to the Caribbean island, devastated after hurricane Irma last year.
Macron came across two bare-chested young men wearing bandannas on their heads. One of them told the French leader that he was a “robber” and was recently released from prison.
The president wasn’t at all perplexed by such a confession. Instead he went on hugging the men and posing for photos with them as one showed a middle finger.
During the visit, he took pictures with the crowd and one man spoke to him. What followed was mind blowing.
“What do you do daily ?” asked the president.
“Nothing at the moment” responded the man.
“Do you go to school ?” asked the president with his hand on the man’s shoulder.
“No, I just got out of prison” responded the 19 year old.
“What did you do for “bêtise”? (French word for very little foolishness), Macron insisted.
“A little robbery”, said the ex-criminal in a apparent state of discomfort.
“It’s a bêtise that” stated Emmanuel Macron.
Macron then made him promise not to commit robbery again and entered the ex-criminal’s home.
“There is still work to rebuild [the island]. Young people like you, you are strong, you have to work on it”, said Macron to the young, bare chested man, wearing a gold chain and a gangster scarf.
“You can’t stay like that and do foolish things. Robberies are over. You said it, you don’t forget it right ? Your mother deserves better than this”.
The way he carried out the rebuking is, along with a picture that’s now surfaced, enraging a lot of French people. It was like he reprimanded a 5 year old child who stole a sweet in a shop.
French social media exploded over the video of the events and right wing politicians are already denouncing Macron’s behaviour.
“We can’t even find words to express our indignation. France certainly doesn’t deserve this. It’s unforgivable!” tweeted Marine le Pen.
Nicolas Dupont-Aignan, the leader of opposition party “Debout la France”, reacted by retweeting a picture of a smiling Emmanuel Macron getting photographed with the young man and a friend of his, giving the middle finger, with the words “Not acceptable”.
This is not the first time Macron is being made fun of for his unpresidential behaviour.
Last June during the National Music Holiday, he invited to the Elysee Palace a group of gay and pro-immigration activists who had deranging behaviour, which consisted of dressing themselves in a provocative manner and chanting sexual slurs.
A recent poll shows that only 19 per cent of French people have a positive view of Macron’s record.
Postado por Pedro Erik às 16:13