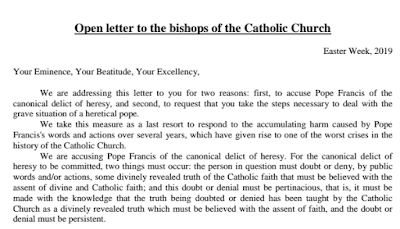 Summary of open letter to bishops as presented by the authors themselves:

The Open letter to the bishops of the Catholic Church is the third stage in a process that began in the summer of 2016. At that time, an ad hoc group of Catholic clergy and scholars wrote a private letter to all the cardinals and Eastern Catholic patriarchs, pointing out heresies and other serious errors that appeared to be contained in or favoured by Pope Francis’s Apostolic Exhortation Amoris laetitia.

The following year, after Pope Francis had continued by word, deed, and omission to propagate many of these same heresies, a ‘Filial Correction’ was addressed to the pope by many of the same people, as well as by other clergy and scholars. This second letter was made public in September 2017, and a petition in support of it was signed by some 14,000 people. The authors of that letter stated however that they did not seek to judge whether Pope Francis was aware that he was causing heresy to spread.
The present Open letter to the bishops of the Catholic Church goes a stage further in claiming that Pope Francis is guilty of the crime of heresy. This crime is committed when a Catholic knowingly and persistently denies something which he knows that the Church teaches to be revealed by God. Taken together, the words and actions of Pope Francis amount to a comprehensive rejection of Catholic teaching on marriage and sexual activity, on the moral law, and on grace and the forgiveness of sins.
The Open letter also indicates the link between this rejection of Catholic teaching and the favour shown by Pope Francis to bishops and other clergy who have either been guilty of sexual sins and crimes, such as former Cardinal Theodore McCarrick, or who have protected clergy guilty of sexual sins and crimes, such as the late Cardinal Godfried Danneels. This protection and promotion of clerics who reject Catholic teaching on marriage, sexual activity, and on the moral law in general, even when these clerics personally violate the moral and civil law in horrendous ways, is consistent enough to be considered a policy on the part of Pope Francis. At the least it is evidence of disbelief in the truth of Catholic teaching on these subjects. It also indicates a strategy to impose rejection of these teachings on the Church, by naming to influential posts individuals whose personal lives are based on violation of these truths.
The authors consider that a heretical papacy may not be tolerated or dissimulated to avoid a worse evil. It strikes at the basic good of the Church and must be corrected. For this reason, the study concludes by describing the traditional theological and legal principles that apply to the present situation. The authors respectfully request the bishops of the Church to investigate the accusations contained in the letter, so that if they judge them to be well founded, they may free the Church from her present distress, in accordance with the hallowed adage, Salus animarum prima lex (‘the salvation of souls is the highest law’). They can do this by admonishing Pope Francis to reject these heresies, and if he should persistently refuse, by declaring that he has freely deprived himself of the papacy.
While this Open letter is an unusual, even historic, document, the Church’s own laws say that “Christ's faithful have the right, and, indeed, sometimes the duty, according to their knowledge, competence, and dignity, to manifest to the sacred pastors their judgment about those things which pertain to the good of the Church” (Code of Canon Law, canon 212.3). While Catholics hold that a pope speaks infallibly in certain strictly defined conditions, the Church does not say that he cannot fall into heresy outside these conditions.
The signatories to the Open Letter include not only specialists in theology and philosophy, but also academics and scholars from other fields. This fits well with the central claim of the Open Letter, that Pope Francis’s rejection of revealed truths is evident to any well-instructed Catholic who is willing to examine the evidence. The signatures of Fr Aidan Nichols OP and of Professor John Rist will be noted. Fr Nichols is one of the best-known theologians in the English-speaking world, and the author of many books on a wide range of theological topics, including the work of Hans Urs von Balthasar and Joseph Ratzinger. Professor Rist, who is known for his work in classical philosophy and the history of theology, has held chairs and professorships at the University of Toronto, the Augustinianum in Rome, the Catholic University of America, the University of Aberdeen, and the Hebrew University of Jerusalem.
The Open Letter is released just after the celebration of Holy Week and Easter Week, in the hopes that the present ‘passion’ of the Church will soon give way to a full resurrection of God’s saving truth.
Clergy and academics who wish to sign the open letter may send their name and credentials to organizers at this email address: openlettertobishops@gmail.com.  All requests will be thoroughly vetted.