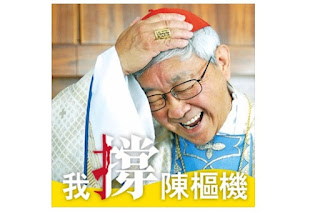 A Hong Kong designer released a frame image on Feb. 6 featuring the five Chinese characters shown above, with a yellow wave pattern. The words read 'We support Cardinal Zen.' Younger Facebook users have composited this with other photos and images to show their support for the embattled cardinal. (Source: Facebook)

Young Catholics in Hong Kong are taking to Facebook to support Cardinal Joseph Zen Ze-kiun, days after the city's sixth bishop blasted the Vatican for preparing to "surrender" to the Chinese Communist Party amid speculation of an agreement between the two sides on clerical appointments.
Legions of social media users in the semi-autonomous region are now changing their profile pictures to show their support for the retired cardinal.
The framed image was created by a Hong Kong designer with the Christian name Dominic. It features a yellow wave at the bottom with five Chinese characters superimposed on it. Facebook users can then add any other image on top of this, for example a photo of Cardinal Zen, a cartoon anime — or as is proving most popular, their own face.
"Seeing so many Catholics support 'grandpa' spontaneously, I decided to make this Facebook profile picture frame for them to use," the 38-year-old told ucanews.com, using an affectionate local moniker for the cardinal, who was named cardinal in 2006 and his term ended in 2009.
The five Chinese letters spell out the phrase "We support Cardinal Zen." The second character from the left implicitly identifies him as a martyr by showing Jesus on a crucifix through its use of red-and-white coloring.
This image "represents all of the clergymen who are suffering on the Chinese mainland," Dominic said.
The yellow wave evokes both the Vatican flag and blog posts by Cardinal Zen in which he refers to the church's troubles in China as a storm to be weathered.
"We are unafraid of the storm because we believe in God," he wrote.
Christianity has made inroads in China since the Tang Dynasty in the 8th century but missionaries were expelled when the communists rose to power in 1949.
In recent decades the two have formed something of an uneasy truce despite Beijing demolishing churches and dictating which pro-government clergymen should be appointed and ordained.
The new Facebook meme was co-designed by another Hong Konger, a 29-year-old who gave his name as Peter. When asked if he was accidentally helping to ignite a 'cult of personality,' he said, "If anyone chooses to interpret it that way, it's their business. I certainly never saw it that way."
Another local person, who declined to be named, said that if a cult were being formed then posters of the pope and bishops of local dioceses would be strung up at religious venues across the city, which is not the case.
Hong Kong's youth have shown in recent years they are not prepared to be bullied or silenced by Beijing's encroaching control of the city after the 1997 handover back to China from the UK.
Only this week a senior appellate court threw out trumped-up charges against Joshua Wong and two other activists who were instrumental in leading the 2014 "umbrella" protest movement in the territory.
"Young people are not that quiet but I cannot stop them," Cardinal Zen was quoted as saying.
He implied he would not try to stop them voicing their opinions against either China or the Vatican.
The retired cardinal pointed out that many older Hong Kongers also disagree with some of the gestures by the Holy See.
"I went to Mass at a cathedral [recently] and afterwards many sisters passed by and said quietly, 'I support you! I support you!'"
The retired cardinal added: "I don't like to make noise because there has already been too much noise."
Another Hong Kong local, a 36-year-old who gave her name as Giana, said she adopted the cardinal's meme on her Facebook page because she admired his courage and outspoken attitude.
"The Holy See does not understand our Hong Kong Catholics and the situation of the church in China. Now even the pope wants to compromise with the Chinese government," she said.
"Cardinal Zen is the only one sticking to his convictions with a conscience and telling the truth."
Another local Catholic, 30-year-old Michael Law, said he uploaded the meme to "express my love for him amid all the flak he has taken in recent days."
"We need the voice of a prophet even more now. Cardinal Zen is more than a shepherd — he is a living testimony to true religious freedom, and an example for young people to [follow]," he said.
He said the Catholic Church has built a strong reputation as a defender of human rights and personal freedom, even organizing non-violent protests in the past to resist former autocratic regimes in the likes of Poland, South Korea and the Philippines.
"I'm concerned that this Sino-Vatican agreement will further weaken the moral prestige of the church and narrow the rich mission of evangelization since the advent of Vatican II," he said.
Others in Hong Kong fear the spread of yet another cult of personality.
"I don't need to change my Facebook profile picture because I don't want to be labeled as supporting some kind of cult," said another young Catholic.
"However I support the cardinal and consider him a role model."