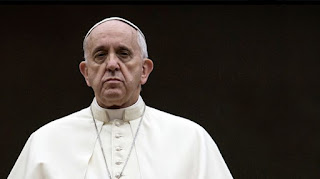 Pope’s China Calculation Clashes with Image as Champion of Oppressed

ROME— Pope Francis ’ recent decision to replace two Chinese bishops loyal to Rome with selectees of the country’s Communist government, heralding his broader moves to reset the Vatican’s ties with Beijing, has drawn cries of betrayal from advocates of the country’s long-persecuted “underground” Catholic Church.
The pope’s actions in China are characteristic of a leader who has repeatedly practiced realpolitik to achieve important goals. But they clash with Pope Francis’ image among many Catholics and others as a defender of the oppressed—a profile likely to be further tested by his campaign to improve Vatican-China relations after seven decades of estrangement.
The pope has decided to recognize seven government-appointed Chinese bishops, according to a person familiar with the matter, in a major concession to Beijing in pursuit of warmer relations and—in the very long term—possible reestablishment of diplomatic ties broken in 1951. As part of that decision, Pope Francis has moved to replace two bishops loyal to the Vatican with prelates from China’s state-controlled Catholic.

Cardinal Joseph Zen, a former bishop of Hong Kong, wrote on Monday that the Vatican seemed to be “selling out the Catholic Church in China.” Vatican officials now expect the pope’s stance in China to provoke more such criticisms from Chinese Catholics who reject government control of the church.
This isn’t the first time Catholics have complained that the pope has abandoned them in pursuit of diplomatic or political ends. But while the outcome of his China initiative remains uncertain, when Pope Francis has seemed to make such trade-offs in the past, the nature of his long-term goals has generally limited the outcry and any damage to his image.
Pope Francis “is a man of extreme realism who calculates very much the effects of what he says or does,” said Sandro Magister, a Vatican expert who writes for Italy’s L’Espresso magazine. “In order to achieve certain results he is quite ready to play down the concern that he otherwise shows for the persecuted and the oppressed.”.

Ukrainian Christians say Pope Francis has deemphasized Russian aggression against their country by describing the fight against Russian-backed separatists in the east as “fratricidal.” They say that stance reflects his effort to cultivate relations with the Russian Orthodox Church, which has close ties to the Kremlin. In 2016, he achieved a dramatic milestone in his effort to reunify the Catholic and Orthodox churches after a 1,000-year split when he held the first meeting by a pope with a Russian Orthodox Patriarch.
Similarly, Middle Eastern Christians have accused the pope of neglecting their plight to promote better ties with Islam, such as when he brought only Muslims back with him after a 2016 visit to a refugee camp in Greece. His conciliatory approach to the Muslim world, including his repeated insistence that Islamist terrorism is in no way inspired by religion, has been widely understood as an effort to make peace with a religion with more than 1.6 billion followers world-wide.
Many saw that approach as vindicated in 2017, when an audience at a Muslim university in Egypt welcomed the pope’s denunciation of violence committed in the name of God.
In China, the pope seeks to increase at least incrementally the religious liberty of Catholics, even by means of compromise with an officially atheistic state. He also seeks to unify the underground Catholic community and members of the state-controlled church.
A number of Catholics and their sympathizers are bound to deplore that policy no matter what happens next. Whether the rest of the world judges it as prudence or opportunism will depend on its success.