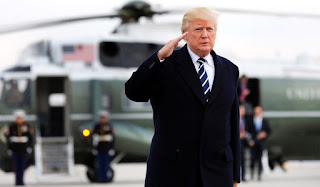 The Trump Doctrine: Deterrence without Intervention?

Donald Trump’s 2016 campaign sought to overturn 75 years of bipartisan foreign policy orthodoxy, especially as it applied to the Middle East.
From 1946 to 1989, the Cold War logic was to use both surrogates and U.S. expeditionary forces to stop the spread of Communist insurrections and coups — without confronting the nuclear-armed USSR directly unless it became a matter of perceived Western survival, as it did with the Berlin airlift and the Cuban missile crises.
That logic led to major conflicts like Vietnam and Korea, limited wars in the Middle East and Balkans, interventions in Latin America and the Caribbean, and occasional nation-building in conquered lands. Tens of thousands of Americans died, trillions of dollars were spent, and the Soviet Union and most of its satellites vanished. “We won the Cold War” was more or less true.

...
But the problem with American policy after the Cold War and the end of the Soviet nuclear threat was that the U.S. was not really comfortable as an imperial global watchdog, we no longer had a near monopoly on the world economy that subsidized these expensive interventions, and many of these thugs did not necessarily pose a direct threat to American interests — perhaps ISIS, an oil-rich Middle East dictator, and radical Islamists excepted. What started as a quick, successful take-out of a monster sometimes ended up as a long-drawn out “occupation” in which all U.S. assets of firepower, mobility, and air support were nullified in the dismal street fighting of a Fallujah or a Mogadishu.

..
At home, in a consistent pattern, the most vociferous advocates of preemptory war usually claimed prescient brilliance, as when the American military rapidly dislodged the Taliban and Saddam Hussein. But then came the occupation and post-war anarchy. As American dead mounted, the mission mysteriously creeped into nation-building. Sometimes, in the post-invasion chaos, the once noble liberated victims became the opportunistic victimizers. Depressed, some of the original architects of preemption blamed those who had listened to them. The establishment’s calling card became, “My weeks-long brilliant theoretical preemption was ruined by your actual botched decade-long occupation.” In extremis, few kept their support; most abandoned it.


Into this dilemma charged Donald Trump, who tried to square the old circle by boasting that he would “bomb the s*** out of ISIS” (and he mostly did that). Yet he also pledged to avoid optional wars in the Middle East — given that they did not pencil out to the Manhattan developer as a cost-benefit profit for America. We had become the world’s largest large oil producer anyway without worrying very much about how many barrels of oil a post-Qaddafi Libya or the Iranian theocrats pumped each day, and our rivals, like China and Russia, would soon find out that their involvement in the Middle East would likely not pencil out.
Trump started well enough. He backed down the provocative North Koreans and Iranians with tougher sanctions, while refusing to use kinetic force to reply to their rather pathetic provocations. He bombed ISIS but yanked American “trip wire” troops out of the Kurdish-Turkish battle zones in Syria, and he green-lighted the military’s killing of ISIS leader Abu Bakr al-Baghdadi. He ratcheted up sanctions against Russia and armed Putin’s enemies without committing to defend any of the old republics of the Soviet Union. He increased the defense budget and boomed the economy but did not use such newly acquired power other than against ISIS.


Rarely has such an empowered military relied so much on economic sanctions. And rarely have leftist pacifist advocates of using sanctions and boycotts so damned Trump’s reluctance to launch missiles and drop bombs — the only common denominator being that whatever the orange man is for, they are against.
Trump’s apparent theory is that time is on his side. The Palestinians are cut off from U.S. funds; their U.N. surrogates are orphaned from the U.S. The U.S. Embassy is in Jerusalem. The Golan Heights are not going back to Syria. It is up to the West Bank and Gaza to change the Middle East dynamic, since their Gulf paymasters could care less about them, given the Palestinians’ romance with an Iran that is slowly going broke.

...
So there is a sort of Trump doctrine that grew in part out of Trump’s campaign promises and in part from the strategic assessment in 2016-17 by then national-security adviser H.R. McMaster, outlining a new “principled realism.” The net result is not to nation-build, preempt, or worry much about changing fetid countries to look like us, but to disproportionately respond when attacked or threatened, and in a manner that causes real damage, without the insertion of U.S. ground troops, in the fashion of the past 75 years.

...
There is one final paradox related to the dilemma of maintaining deterrence without invading hostile countries. Trump apparently believes that a booming economy, a well-funded muscular military, and plenty of U.S.-produced oil and gas give America enormous power and a range of choices that recent presidents lacked.
The result would be that when forced to respond to an attack on an American asset or ally, the U.S. could do so disproportionately, destructively, and without any red line, promise, or virtue-signaling about what it might do next — given its unique ability to hit abroad without being hit at home, and with a well-oiled economy that has no need to beg the Saudis to be nice, or to urge the Iranians to pump more, or to get the Venezuelans back into the exporting business.
Add up all these paradoxes, and I suppose we could call the Trump administration’s idea of deterrence without preemptive intervention as either “Live and let live” — or, more macabrely, “Live — and let die.” Either way, the paradox is to maintain critical deterrence against American enemies to prevent a war, but without Pavlovian interventions, and without being baited into optional military action that is antithetical to the national mood that got Trump elected.