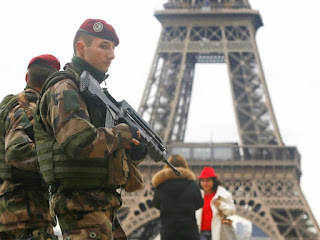 Interior Minister Gerard Collomb made it official. France is "in a state of war”.

It’s not just rhetoric. Bombs turn up in a posh Parisian suburb. Two young women are butchered at a train station. And it’s just another week of an Islamic World War III being fought in France.

From the November attacks in 2015 that killed 130 people and wounded another 400+, to the Bastille Day truck ramming attack last year that killed 86 and wounded 458, the war is real.

There’s something very wrong when Afghanistan is safer than Paris.

10,000 French soldiers were deployed in the streets of their own country in Operation Sentinelle after the Charlie Hebdo - Kosher supermarket attacks in 2015. Thousands of French soldiers are still patrolling, guarding and shooting in French cities which have become more dangerous than Afghanistan.

Operation Sentinelle has deployed twice as many French soldiers to France as to Afghanistan. And French casualties in the Islamic war at home have been far higher that they were in Afghanistan.

When the French intervened to stop the Islamist takeover of Mali, they suffered a handful of losses. The 4,000 French soldiers came away from Operation Serval with 9 casualties and Operation Barkhane amounted to 5 dead. The Gulf War? Another 9 dead. It’s a lot safer to be a French soldier fighting Al Qaeda in a Muslim country than a Parisian civilian going to a concert in his or her own city.

French casualties in the struggle with Islamic terror in just the last two years are approaching the 300 casualties of the Korean War.

France is at war. That’s why there are soldiers in the streets.