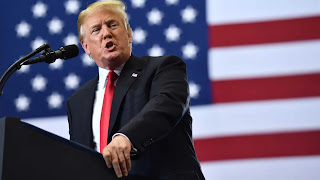 The "Trump Doctrine" for the Middle East


After three successive American Presidents had used a six-month waiver to defer moving the US Embassy to Jerusalem for more than two decades, President Donald J. Trump decided not to wait any longer. On December 7, 2017, he declared that the United States recognizes Jerusalem as the capital of Israel; the official embassy transfer took place on May 14th, the day of Israel's 70th anniversary.

From the moment of Trump's declaration, leaders of the Muslim world expressed anger and announced major trouble. An Islamic summit conference was convened in Istanbul a week later, and ended with statements about a "crime against Palestine". Western European leaders followed suit. Germany's Chancellor Angela Merkel said that President Trump's decision was a "serious mistake" and could have huge "consequences". French President Emmanuel Macron, going further, declared that the decision could provoke a "war".

Despite these ominous predictions, trouble remained largely absent. The Istanbul statement remained a statement. The "war" anticipated by Macron did not break out.
The Islamic terrorist organization Hamas sent masses of rioters from Gaza to tear down Israel's border fence and cross over, to force Israeli soldiers to fire, thereby allowing Hamas to have bodies of "martyrs" to show to the cameras. So far, Hamas has sent 62 of its own people to their death. Fifty of them were, by Hamas's own admission, members of Hamas.

Pundits who predicted more violent reactions have been surprised by the relatively quiet reaction of the Palestinian and Muslim communities. The reason might be called the "Trump Doctrine for the Middle East".

One element of it consisted of crushing the Islamic State in Syria and Iraq. President Trump had promised quickly to clear the world of what had become a main backbone of Islamic terrorism. He kept his promise in less than a year, and without a massive deployment of American troops. Trump has shown the strength of the United States and restored its credibility in a region where strength and force determine credibility.

Another element of it was put in place during President Trump's trip to Saudi Arabia in May 2017. President Trump renewed ties which had seriously deteriorated during the previous 8 years. Trump more broadly laid the foundation for a new alliance of the United States with the Sunni Arab world, but he put two conditions on it: a cessation of all Sunni Arab support for Islamic terrorism and an openness to the prospect of a regional peace that included Israel.

Both conditions are being gradually fulfilled. In June 2017, Saudi Arabia's King Salman chose his son Mohammed bin Salman (MBS) as heir to the throne. MBS started an internal revolution to impose new directions on the kingdom. The Islamic Military Counter Terrorism Coalition, created on December 15, 2015, was endorsed by the United States; it held its inaugural meeting on November 26, 2017. In addition, links between Israeli and Saudi security services were strengthened and coordination between the Israeli and Egyptian militaries intensified.

An alliance between Israel and the main countries of the Sunni Arab world to contain Iran also slowly and unofficially began taking shape. MBS, calling calledHamas a terrorist organization, saying that it must "be destroyed". He toldrepresentatives of Jewish organizations in New York that Palestinian leaders need to "take the [American] proposals or shut up."


Palestinian Authority leader Mahmoud Abbas was summoned to Riyadh twice -- in November and December 2017; and it appears he was "asked" to keep quiet. Never has the distance between Palestinian organizations, and Saudi Arabia and the Sunni Arab world, seemed so far. The only Sunni Arab country to have maintained ties with Hamas is Qatar, but the current Emir of Qatar, Sheikh Tamim ben Hamad Al Thani, has been under pressure to change his stance.

Immediately after President Trump left Riyadh, a third element emerged. The US presidential plane went directly from Riyadh to in Israel: for the first time, a direct flight between Saudi Arabia and Israel took place. President Trump went to Jerusalem, where he became the first sitting US President to visit the Western Wall, the only historical remains of a retaining wall from the ancient Temple of King Solomon. During his campaign, Trump had referred to Jerusalem as "the eternal capital of the Jewish people", implicitly acknowledging that the Jews have had their roots there for 3,000 years.

After his visit to the Wall, President Trump went to Bethlehem and told Mahmoud Abbas what no American President had ever said: that Abbas is a liar and that he is personally responsible for the incitement to violence and terror. In the days that followed, the US Congress demanded that the Palestinian Authority renounce incentivizing terrorism by paying cash to imprisoned Palestinian terrorists and families of terrorists killed while carrying out attacks. President Trump's Middle East negotiators, Jared Kushner and Jason Greenblatt made it clear to Palestinian leaders that US aid to the Palestinian Authority could end if the US demand was not met. Nikki Haley told the United Nations that the US could stop funding UNWRA if Palestinian leaders refused to negotiate and accept what the US is asking for. Since it was founded in 1994, the Palestinian Authority has never been subjected to such intense American pressure.

The fourth element was President Trump's decision to leave the Iran nuclear deal. President Trump immediately announced he would restore "the harshest, strongest, most stringent sanctions" to suffocate the mullahs' regime. Secretary of State Mike Pompeo has since presented to Iran a list of 12 "basic requirements" for a new agreement.

President Trump's decision came in a context where the Iran regime has just suffered a series of heavy blows: the Israeli Mossad's seizure in Tehran of highly confidential documents showing that Iran has not ceased to lie about its nuclear program; the revelation by Israeli Prime Minister Benjamin Netanyahu of the Mossad operation, and the Israeli army's decisive response to an Iranian rocket barrage launched from Syrian territory. By it, Israel showed its determination not to allow Russia to support Iran when Iran uses its bases to attack Israel.

...
Ambassador John Bolton, now National Security Advisor, mentioned in January that the "strategic interest of the United States" is to see the regime overthrown.

Referring recently to the situation in the Middle East and the need to achieve peace, Pompeo spoke of the "Palestinians", not of the Palestinian Authority, as in Iran, possibly to emphasize the distinction between the people and their leadership, and that the leadership in both situations, may no longer be part of the solution. Hamas, for the US, is clearly not part of any solution.