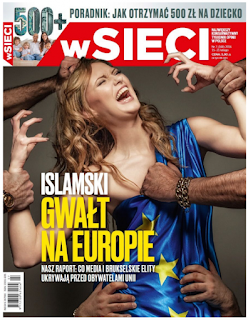 After the New Year’s Eve sexual assaults in Cologne and 17 other cities, the Catholic hierarchy in Europe is starting to get worried — about “nationalists” and “right-wingers,” that is.

Cardinal Rainer Woelki of Cologne condemned the sexual assaults outside his cathedral, but reserved most of his concern for threats from “right or brown circles.” Bishop Gregor Hanke of Eichstätt complained that German leaders who talked of re-establishing borders were adopting policies that were “right-wing and Islamophobic.” Cardinal Christoph Schönborn, the archbishop of Vienna, recently warned that, in the face of Europe’s migrant crisis, the biggest risk is the return of a “new nationalism.” The challenge of the refugees, he said, creates “the risk that everyone withdraws into their own limits” and that “the borders, barriers, walls, the Iron Curtain will return.”

So, if these bishops are right, a lot of people in Europe have misplaced fears. The real danger is not the hordes of young Muslim males rampaging through Europe, but the people who think something ought to be done about it. As most Europeans know, words like “new nationalism,” “right or brown circles,” “xenophobes” and “populists” are code words for neo-Nazis.

I’ve written before about the European bishops and their fear of neo-nationalism and of people with a “borders” mentality. The theme of the 2014 meeting of the Conference of European Justice and Peace Commissions (COMECE) — a conference of European bishops — was “The Nationalism of Exclusion.” The bishops expressed fears about the “growing phenomenon of racism and xenophobia across Europe.” Nationalist movements, they said, were reminiscent of the “belligerent and ultra-nationalist politics which preceded both world wars.”

For the most part, the bishops lean toward the borderless, internationalist view of the world espoused by the Euro elites. With the exception of marriage and family issues, the hierarchy seem to have adopted the EU agenda as its own. Indeed, the COMECE declaration even urges European citizens to “withstand any temptations to scapegoat the European Union for domestically generated problems.”
In doing so, they run the risk that, like, Europe’s secular leaders, they will become disconnected from ordinary people — the kind of people who fear for the safety of their wives and daughters should mass immigration be allowed to continue. Gregor von Furstenberg, the vice-president of Missio, a German missionary society, observed that Europeans are challenged “to offer dignified living conditions” to refugees “because never before in recent history are so many people fleeing war, oppression, and hunger, and are knocking at our door.” What he and other Church officials don’t seem to understand is that the fear of many Europeans is not so much that migrants will be knocking at their doors, but that they will be knocking down their doors.

As they already have been doing. The number of break-ins to homes and businesses has soared dramatically since the refugees arrived in Europe. Before the assaults on New Year’s Eve, the Cologne Cathedral itself — that is to say, Cardinal Woelki’s church — was subjected to a “massive rocket and ‘banger’ fireworks barrage that lasted the whole service.” “Again and again,” said architect Barbara Shock-Warner, “the north window of the cathedral was lit up red, because rocket after rocket flew against it.”

Cardinal Woelki said he was annoyed by the noise and disruptions, but he seemed more annoyed at the “right or brown circles” who would punish “all refugees for the crimes of a few.” A few? There were 1,000 assailants and, at last count, the number of the victims was more than 800. The noise of the rocket barrage seems to have left the cardinal slightly tone-deaf. Like others in the European hierarchy, he seems out of touch with the fears and anxiety experienced by ordinary citizens.

As I’ve noted before, Father Matthew Gardzinski, an official for the Pontifical Council on Migrants has brushed off these kind of anxieties about refugees as “xenophobic, restrictive, or fearful attitudes” which don’t have any “objective” basis in reality. The general attitude on the part of Catholic authorities seems to be that these are the fears of closed-minded people who haven’t been to university, or haven’t had sufficient exposure to the “other.” From their point of view, such people live mentally in a nostalgic past which is no longer relevant. Thus, Cardinal Schönborn calls for Europeans to overcome their fears and “new nationalism which seems outdated.” Which is his polite way of saying, “If you’re not careful, you’re going to fall back into the Nazi past.”

But it’s beginning to look like the advocates of a borderless European Union are the ones who are living in the past. The success of an enterprise such as the European Union depends very much on the assumption that the members of the common union will share common values. But the shared-values assumption has been broken into a hundred shards by the combined forces of multiculturalism and immigration.

Europeans are rightly dubious about sharing their societies with people whose values include female genital mutilation, forced marriage, and other forms of misogyny. One widely accepted “value” in the Islamic world is that women who don’t cover up in public are fair game. That attitude was very much in evidence on New Year’s Eve in Cologne.

Under such conditions, re-establishing borders and boundaries is not an atavistic response. It is the normal civilized reaction. It is the Euro elites, along with many bishops, who are living in the past. They assume that the conditions that prevailed in the past and that once made a common union feasible are still in place. But they’re not. And thanks to the experiments of the elites, that past may never be recovered.

The European elites are in the habit of comparing today’s nationalists to the Nazis. But the Nazis’ main concern (up until the last stages of the war) was not to defend the borders of Germany, but to expand them. Hitler’s aim was to bring all of Europe and the United Kingdom under Nazi control. In that sense, Nazism was as much an international movement as was communism.

In their preoccupation with the specter of nationalism gone bad, the bishops and other European opinion-makers seem to have forgotten that internationalism can also go bad — and in a big way. In the 20th century, the communist international movement (its anthem was and is the “Internationale”) led to the enslavement and murder of countless people.

The biggest internationalist movement today is Islam. Like many of the bishops, the Islamists don’t believe in borders. They don’t think of themselves as French, or German, or British. Their only allegiance is to Islam. Why? Because according to Islamic doctrine, the whole world rightly belongs to Islam. The peace that Islamists envision will only come about when every nation is brought under the House of Islam.

The gulf between the bishops and the common folk is widening. The prelates say we shouldn’t build walls, but they have walled themselves off from the increasing number of Europeans who do feel the need for walls, fences and borders. Indeed, at this point, Church spokesmen seem even more insistent on maintaining Europe’s borderless status than Europe’s secular leaders.

On Jan. 25, European interior ministers met to discuss a two-year suspension of the Schengen Agreement. This is the agreement that makes it possible for you to drive from Portugal to Spain to France to Germany and just about anywhere else without anyone stopping you or asking for your passport. It’s a convenient arrangement for tourists and business travelers, but also for terrorists.
But in Rome, the threat of terrorism pales next to the threat of nationalism. In response to the meeting, the Vatican newspaper L’Osservatore Romano carried a front-page op-ed piece criticizing European officials for backtracking on Schengen. According to vice editor Giuseppe Fiorentino, “blocks and walls” are not the solution and the EU should abandon “egoism.”

“Egoism,” I suppose, refers to all those supposedly self-interested, other-fearing nationalists who have the gall to put love of family and country ahead of the dream of universal bonding.

But the Europeans who are resisting the invasion of their countries by internationalist ideologues are not narrow-minded xenophobes; they are no different from their forebears who resisted the Nazi and communist invasions of their nations during the middle third of the 20th century.

William Kilpatrick is the author of Christianity, Islam and Atheism:
The Struggle for the Soul of the West. Visit his website,
turningpointproject.com for more about his work and writings.