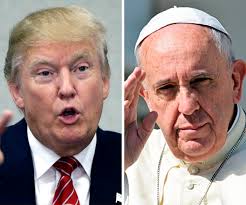 What Donald Trump and Pope Francis actually have in common


Could any two public figures be more dissimilar than Pope Francis and Donald Trump? The smiling Latin-American pontiff casts himself as a friend of the downtrodden; the scowling U.S. billionaire is running to be winner-in-chief.
This week, the two exchanged insults. Aboard the papal plane after his visit to Mexico, the pope said that anyone who supports a proposed border wall, as Trump does, is “not Christian.” Trump dismissed Francis’s criticism as “disgraceful” and taunted him as a “pawn” of Mexico. He predicted that the pontiff would want Trump in the White House when the Islamic State attacks Rome.
Certainly, the two men embody different worldviews. Francis urges us to “go to the peripheries” and encounter the marginalized, in whom we see the face of God. In a homily delivered at the United States-Mexico border this week, he called for “the enslaved, the imprisoned and extorted” to be recognized as “our brothers and sisters.”
By contrast, Trump has built his popularity on appeals to strength. His signature promise is to give all of the United States the benefit of his abilities as a “winner,” and thereby to make us “great again.”
Despite these differences, Francis and Trump have much in common. Begin with how they choose their major targets. Both are outsiders bent on shaking up their establishments. Francis challenges a hidebound Vatican bureaucracy and flirts with revising settled Catholic doctrine. He denounces institutional maintenance, demanding “a church that is poor and for the poor.”
Trump attacks conventional Republican politicians and violates every conservative orthodoxy. He calls George W. Bush a liar and praises Planned Parenthood. His every electoral success deals another blow to a political class that is already reeling during a primary season marked by populist passions.
There are rhetorical similarities, too. Barton Swaim, a former speechwriter, notes that conventional politicians “rely … heavily on abstractions” and “avoid concrete nouns.” By contrast, writes Swaim, Trump addresses potential voters in a vivid and snappy way, using simple words and arresting statements. Much the same could be said of Francis.
Francis’s claim that “the earth, our home, is beginning to look more and more like an immense pile of filth” is a piece of arresting hyperbole not unlike Trump’s claims that “we are led by very, very stupid people.” Whatever the merits of their arguments, both know how to make headlines.
And both men promise to empower those who feel excluded — from the Catholic Church, or from the U.S. political process. Francis sets aside established rules to accommodate troubled Catholics, while Trump gives voice to the anxieties of working-class whites who feel they have lacked a champion.
In making these appeals, Francis and Trump prioritize an iconoclastic style over substance — or coherence. The pope has heartened many Catholics, and shocked others, by supporting heterodox views on communion for the divorced and remarried. But he is hardly a down-the-line liberal.
He opposes abortion and has described gender theory as a violation of nature similar to the use of nuclear arms. His scattershot rhetoric finds its parallel in the opportunistic bombast of Trump.
Both an opponent of immigration and a critic of immigration rhetoric, both antiabortion and a supporter of the nation’s leading abortion provider, Trump boasts a political program that is no clearer than Francis’s theological one. Both men prize bold words and gestures at the expense of clear arguments and specific policies.
Their admirers overlook these inconsistencies. Why? The basis of their appeal is a mistrust of institutions, which is widespread and increasing. According to the Gallup Organization, only 42 percent of Americans now profess confidence in organized religion, down from a historical average of 55 percent. Only 8 percent have confidence in Congress, down from a historical average of 24 percent.
In such an environment, anti-establishment personalities become immensely attractive. It seems that all we need is a Strong Will (in Trump’s case) or Good Intentions (in Francis’s). Institutions, with their rules and customs, seem irrelevant at best.
But iconoclasm, though exhilarating for a while, may not deliver the revitalization it promises. For all his global popularity, the pope has failed to improve the reputation of the church he leads. A Washington Post-ABC Newspoll found “no evidence that Francis’s likability has boosted Catholic identification, worship attendance or prayer.”
This may be because, as the German writer Martin Mosebach has observed, Francis presents himself as a “dynamic, unconventional, courageous pope with a golden heart” in contrast to a church that is a “crusty, dead, faithless, rigid machine.” Why go to church? Better to follow the pope on Twitter.
Trump and Francis propose to deliver us from inconvenient and unresponsive institutions, with all their strictures and corruptions. But such creative destruction may do more harm than good. Political parties, whatever their failings, are crucial to taming and directing democratic passions. To replace them with candidates drawn from reality TV hardly seems an improvement.
The same is true of the Catholic church. Francis refuses to be constrained by his office in his mission of mercy. But often the constraints of an office are the best defense of ordinary people against the whims of the powerful.
Established rules allow the powerless to hold their leaders to account. If the pope need not follow liturgical or doctrinal rules, why should he follow guidelines concerning sex abuse? When we elevate personalities over institutions, we may not help the weak so much as render them ever more subject to the strong.
Matthew Schmitz is literary editor of First Things magazine.
Postado por Pedro Erik às 14:37