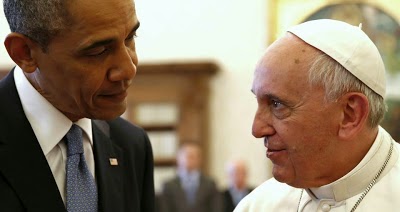 This morning, 27 March 2014, the Hon. Barack H. Obama, President of the United States of America, was received in audience by His Holiness Pope Francis, after which he met with His Eminence Cardinal Pietro Parolin, Secretary of State, and Archbishop Dominique Mamberti, Secretary for Relations with States. During the cordial meetings, views were exchanged on some current international themes and it was hoped that, in areas of conflict, there would be respect for humanitarian and international law and a negotiated solution between the parties involved.
In the context of bilateral relations and cooperation between Church and State, there was a discussion on questions of particular relevance for the Church in that country, such as the exercise of the rights to religious freedom, life and conscientious objection, as well as the issue of immigration reform. Finally, the common commitment to the eradication of trafficking of human persons in the world was stated.