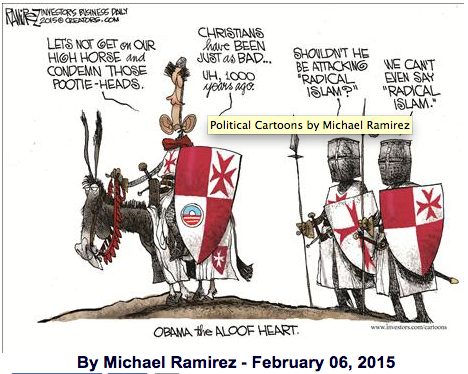 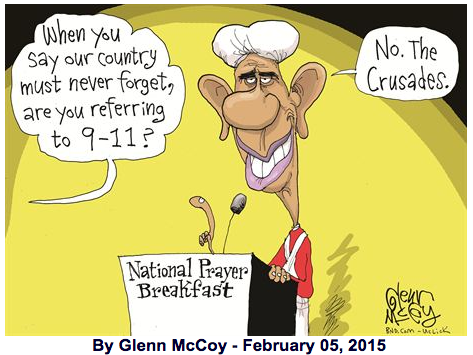 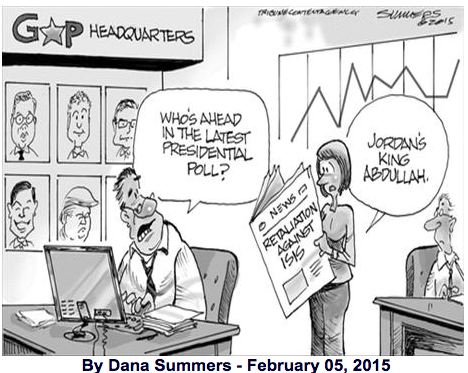 
Misconceptions about the Crusades are all too common. The Crusades are generally portrayed as a series of holy wars against Islam led by power-mad popes and fought by religious fanatics. They are supposed to have been the epitome of self-righteousness and intolerance, a black stain on the history of the Catholic Church in particular and Western civilization in general. A breed of proto-imperialists, the Crusaders introduced Western aggression to the peaceful Middle East and then deformed the enlightened Muslim culture, leaving it in ruins. For variation on this theme, one need not look far. See, for example, Steven Runciman's famous three-volume epic,History of the Crusades, or the BBC/A&E documentary, The Crusades, hosted by Terry Jones. Both are terrible history yet wonderfully entertaining.
So what is the truth about the Crusades? Scholars are still working some of that out. But much can already by said with certainty. For starters, the Crusades to the East were in every waydefensive wars. They were a direct response to Muslim aggression — an attempt to turn back or defend against Muslim conquests of Christian lands.
Christians in the eleventh century were not paranoid fanatics. Muslims really were gunning for them. While Muslims can be peaceful, Islam was born in war and grew the same way. From the time of Mohammed, the means of Muslim expansion was always the sword. Muslim thought divides the world into two spheres, the Abode of Islam and the Abode of War. Christianity — and for that matter any other non-Muslim religion — has no abode. Christians and Jews can be tolerated within a Muslim state under Muslim rule. But, in traditional Islam, Christian and Jewish states must be destroyed and their lands conquered.
With enormous energy, the warriors of Islam struck out against the Christians shortly after Mohammed's death. They were extremely successful. Palestine, Syria, and Egypt — once the most heavily Christian areas in the world — quickly succumbed. By the eighth century, Muslim armies had conquered all of Christian North Africa and Spain. In the eleventh century, the Seljuk Turks conquered Asia Minor (modern Turkey), which had been Christian since the time of St. Paul. The old Roman Empire, known to modern historians as the Byzantine Empire, was reduced to little more than Greece. In desperation, the emperor in Constantinople sent word to the Christians of western Europe asking them to aid their brothers and sisters in the East.
That is what gave birth to the Crusades. They were not the brainchild of an ambitious pope or rapacious knights but a response to more than four centuries of conquests in which Muslims had already captured two-thirds of the old Christian world. At some point, Christianity as a faith and a culture had to defend itself or be subsumed by Islam. The Crusades were that defense.
During the past two decades, computer-assisted charter studies have demolished that contrivance. Scholars have discovered that crusading knights were generally wealthy men with plenty of their own land in Europe. Nevertheless, they willingly gave up everything to undertake the holy mission. Crusading was not cheap. Even wealthy lords could easily impoverish themselves and their families by joining a Crusade. They did so not because they expected material wealth (which many of them had already) but because they hoped to store up treasure where rust and moth could not corrupt. They were keenly aware of their sinfulness and eager to undertake the hardships of the Crusade as a penitential act of charity and love. Europe is littered with thousands of medieval charters attesting to these sentiments, charters in which these men still speak to us today if we will listen. Of course, they were not opposed to capturing booty if it could be had. But the truth is that the Crusades were notoriously bad for plunder. A few people got rich, but the vast majority returned with nothing.
"Crusading," Professor Jonathan Riley-Smith has rightly argued, was understood as an "act of love" — in this case, the love of one's neighbor. The Crusade was seen as an errand of mercy to right a terrible wrong. As Pope Innocent III wrote to the Knights Templar, "You carry out in deeds the words of the Gospel, 'Greater love than this hath no man, that he lay down his life for his friends.'"
The second goal was the liberation of Jerusalem and the other places made holy by the life of Christ. The word crusade is modern.

The problem with all such high-horse declarations by Obama is his continual omission of historical context and, in this case, his conflation of the frequent with the rare. The Crusades began in 1095, almost a millennium ago; the Inquisition in 1478, now over 500 years past.


In fact, Christian countries were the first to legally end the age-old human sin of the slave trade, and the first to outlaw slavery’s continuance. The president, is fond of historical sloppiness and moral equivalence (cf. the Cairo Speech). But what is the point of citing sins of 1,000, 500, 150, or 50 years ago, without acknowledging 1) that such pathologies still continue today outside the West, especially in the world of Islam, and 2) that Christianity had a unique role in ending these wrongs?
So the question for the president is, why does such medieval violence persist to a much greater degree among so many Islamic extremists in the present world than among most zealots of other religions? (This is an empirical statement. Cf., for instance, the nature of recent global terror attacks in resources such as the Global Terrorism Database). And why search the distant past for examples of moral equivalence, unless the present does not offer suitable data?
Did Churchill point to the excesses of Oliver Cromwell, or did Daladier to the French Revolution, to remind their contemporaries that National Socialism in Germany was not doing anything differently in the 1930s than had their own countries in the distant past? Those of the 1930s who sought to make such facile comparisons between their own past and Germany’s present were written off as appeasers.


Not long ago I found myself in a dispute with someone who alleged that the Catholic Church used to imprison, torture, and excommunicate people who taught that the world was round (yes, I know it’s actually spherical—save yourself the trouble of commenting). When I asked for an example, he mentioned Galileo.
Now, Galileo’s thing wasn’t a round earth, and he wasn’t tortured, and he wasn’t excommunicated. Plus his “imprisonment” amounted to a comfortable home sabbatical. But apart from these pesky facts, I said, that was a great example.
...
The secularist mindset broadly assumes that all religions are bad, just varying degrees of bad. Secularists’ vague but confidently held notions about the evils of Christianity past fit right into that mindset. It’s important to challenge the foundation for that mindset through facts and arguments. But then it’s equally important to show them how their disdain for religion might be replaced by admiration.
For example, you will have shown your critic how nearly all the Crusaders were not greedy, brutish, imperialistic warriors out to steal land and souls. You will have put into proper historical context things like the Fourth Crusade and the accepted practices of medieval warfare. Next you can emphasize the self-sacrifice of the Crusaders—their willingness to give up their lives and fortunes to liberate formerly Christian lands that Islam had subjugated. Those are the same lands, you might add, where today militant Islam continues to threaten peace, democracy, and stability.
Or, after fighting back with facts on the Inquisition or slavery, you can build a positive case that, in truth, Christianity has been a champion for human dignity for its entire history. Because it views all men as created in God’s image and likeness, it can root human worth—and hence things like law, justice, the protection of the weak—in something transcendent and unchangeable. Christians didn’t invent slavery, but they did reform and eventually end it.


But we need to remem­ber too that what Mr. Obama said today is not some new false­hood that has never been uttered before. Myths about the Cru­sades have a long his­tory, and Obama is only say­ing what Bill Clin­ton once did.
..
Rad­i­cal Islam does not exist because the Cru­sades did; the Cru­sades existed because rad­i­cal Islam did first. Islam had been plun­der­ing lands and killing peo­ple for hun­dreds of years before the first Cru­sade was called. At last we fought back. Maybe we should now.
In A.D. 632, Egypt, Pales­tine, Syria, Asia Minor, North Africa, Spain, France, Italy, and the islands of Sicily, Sar­dinia, and Cor­sica were all Chris­t­ian ter­ri­to­ries. Inside the bound­aries of the Roman Empire, which was still fully func­tional in the east­ern Mediter­ranean, ortho­dox Chris­tian­ity was the offi­cial, and over­whelm­ingly major­ity, reli­gion. …
By A.D. 732, a cen­tury later, Chris­tians had lost Egypt, Pales­tine, Syria, North Africa, Spain, most of Asia Minor, and south­ern France.

In the hun­dred years between 850 and 950, Bene­dic­tine monks were dri­ven out of ancient monas­ter­ies, the Papal States wereover­run, and Mus­lim pirate bases were estab­lished along the coast of north­ern Italy and south­ern France, from which attacks on the deep inland were launched. [Now watch this.] Des­per­ate to pro­tect vic­tim­ized Chris­tians, popes became involved in the tenth and early eleventh cen­turies in direct­ing the defense of the ter­ri­tory around them.

The popes were “des­per­ate,” but not to do ill deeds. Their pur­pose was “to pro­tect vic­tim­ized Chris­tians.” That’s the his­tory, Mr. Obama. That’s the truth, Mr. Obama. It was not until 1095—more than 450 years after all this Mus­lim plun­der of Chris­t­ian nations began—that Pope Urban II at last called the First Cru­sade to drive the enemy out of their lands. 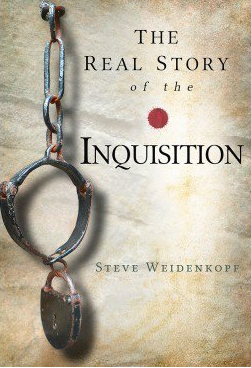