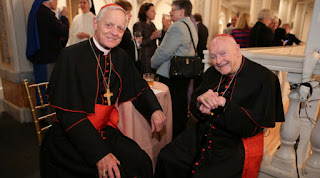 The news over the weekend that Pope Francis stripped former Cdl. Theodore McCarrick of his place in the College of Cardinals has given other cardinals and bishops in the United States the freedom to now issue their own politically worded statements condemning McCarrick.
But their various statements are now raising all sorts of deeper questions.
Cardinal Donald Wuerl, long-time associate of McCarrick, sent a letter to all his Washington, D.C. archdiocesan priests saying he knew nothing.
Newark Cdl. Joseph Tobin issued a statement condemning the situation in the Church that would allow this to happen. What his statement did not tell you is that he owes his role as archbishop of Newark to McCarrick, who lobbied the Pope for Tobin.
Cardinal Sean O'Malley issued a statement that had the appearance of being carefully crafted by a team of attorneys, saying that when a victim contacted him about McCarrick, he didn't get the letter, and that anyway, the real problem is the right policies weren't in place — failing to say that he was one of the high-ranking members of the hierarchy that helped the current insufficient policies he now condemns.
And then there is the beyond believable "shock" registered by Cdl. Kevin Farrell, who lived with McCarrick in Washington, D.C. for six years, who appears to have lied about his relationship with notorious predator Fr. Marcial Maciel, founder of the Legion of Christ.
According to various eyewitnesses in the Legion, Farrell was a trusted inner-circle guy with Maciel, and his current shock at the McCarrick scandal would mean that here is a man who was in the inner circle of not just one but two notorious clerics molesting and harassing children and adults for years — and in both cases, he knew absolutely nothing.
Lots of laity are simply not buying it.
In the case of Cdl. Donald Wuerl, his public denial of knowing anything raises a serious doubt: Someone is lying and concealing. He says no one told him anything, but the timeline calls his denial into question.
McCarrick was archbishop of Washington, D.C. from 2000–06. Wuerl took over D.C. in 2006. The year before, in 2005, Bp. Paul Bootkoski of Metuchen, New Jersey secretly paid off a victim of McCarrick with diocesan funds.
Did he inform anyone in the hierarchy, or then-Pope Benedict, that one of the members of the College of Cardinals was a predator? Did he tell the papal nuncio?
Did he wonder in his mind, Hmm ... if this happened once, were there other times? Did he call the archbishop of Newark, John Myers, and let him know that he might have to go through the exact same thing that he himself had just gone through, making secret payouts to victims?
If he did none of this, why not? Wouldn't that be an enormous dereliction of duty?
That was in 2005. Then, in 2006, McCarrick's retired from D.C. because he turned 75, and Donald Wuerl took over D.C.
Then just the next year — 2007 — Abp. John Myers of Newark did, in fact, have to make his own secret payouts to victims of McCarrick. So the same questions: Did he really not inform Wuerl that McCarrick was a predator and roaming about the Washington, D.C. archdiocese able to prey on whoever he wanted?
Did he claim, like Bootkoski, that he told no one, not the Pope, not the nuncio, not the ordinary of McCarrick's archdiocese? This is, after all, a cardinal, and a very influential high-profile cardinal we are talking about. Is it reasonable to think that neither of these two men told anyone — including Wuerl?
No, it isn't.
If they said nothing, then those two men are complicit in letting McCarrick roam freely and continue abusing young men, and they should go to jail. If they told others, who did they tell? Who did those churchmen tell? This boils down to a question of who knew what and when did they know it — and what did they do about it?
These weekend denials from O'Malley, Wuerl and Farrell simply do not pass the smell test, and the laity need to demand answers.
Myers (who protected predator priests in his own archdiocese and then retired in luxury) as well as Bootkoski need to be made to answer if they told anyone and whom they told. Or, if they didn't tell anyone, did they not feel one ounce of compassion for any future victims of McCarrick? Did they really think the Pope himself didn't need to know this? Did they really think that Wuerl wouldn't want to know that a man he was sending out to parishes for confirmations and other official duties was preying on unsuspecting victims? Or is Donald Wuerl lying, denying he knew anything?
It's time for other bishops in the national conference to start demanding these answers. This is the most important moment in the history of the Church in the United States. It's clear that the old powerbrokers have circled the wagons and are pretending they knew nothing. That's now the official party line — ignore any probing questions and play stupid. 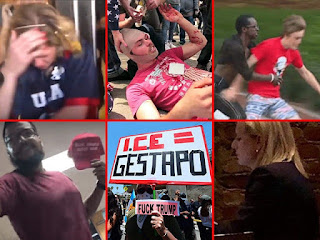