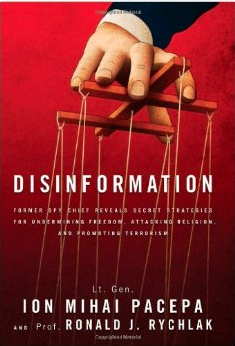 History often repeats itself, and if you have lived two lives, as I have done, you have a good chance of seeing the reenactment with your own eyes.

Liberation theology, of which not much has been heard for two decades, is back in the news. But what is not being mentioned is its origins. It was not invented by Latin American Catholics. It was developed by the KGB. The man who is now the head of the Russian Orthodox Church, Patriarch Kirill, secretly worked for the KGB under the code name “Mikhailov” and spent four decades promoting liberation theology, which we at the top of the Eastern European intelligence community nicknamed Christianized Marxism.

Its genesis was part of a highly classified Party/State Disinformation Program, formally approved in 1960 by KGB chairman Aleksandr Shelepin and Politburo member Aleksei Kirichenko, then the second in the party hierarchy after Nikita Khrushchev. In 1971, the KGB sent Kirill — who had just been elevated to the rank of archimandrite — to Geneva as emissary of the Russian Orthodox Church to the World Council of Churches. The WCC was, and still is, the largest international religious organization after the Vatican, representing some 550 million Christians of various denominations in 120 countries. Kirill/Mikhailov’s main task was to involve the WCC in spreading the new liberation theology throughout Latin America. In 1975, the KGB was able to infiltrate Kirill into the Central Committee of the WCC — a position he held until he was “elected” patriarch of Russia, in 2009. Not long after he joined the Central Committee, Kirill reported to the KGB: “Now the agenda of the WCC is also our agenda.”

During Kirill’s years at the helm of the WCC, liberation theology put down deep roots in Latin America — where the map now has significant patches of red. Russian military ships and bombers are back in Cuba for the first time since the 1962 Cuban missile crisis, and Russia has also newly sent ships and bombers to Venezuela. Pope John Paul II, who knew the Communist playbook well, was not taken in by the Soviets’ liberation theology. In 1983, his friend and trusted colleague Cardinal Ratzinger (later Pope Benedict XVI), who at that time was head of the Vatican’s Congregation for the Doctrine of Faith, discarded as Marxist the liberation-theology idea that class struggle is fundamental to history. The cardinal called liberation theology a “singular heresy” and blasted it as a “fundamental threat” to the Church.

Tsarism and Communism may have been swallowed up by the sands of time, but the Kremlin continues this tradition. Throughout its history, Russia has been a samoderzhaviye, a traditional Russian form of totalitarian autocracy in which a feudal lord rules the country and the church with the help of his political police force. The latter, whenever it had a sticky image problem, simply changed its name — from Okhrana to Cheka, to GPU, to OGPU, to NKVD, to NKGB, to MGB, to MVD, to KGB — ­and pretended it was a brand new organization.

Many deceased KGB officers must have been chortling in their graves on New Year’s Eve, 1999, when their old boss, Vladimir Putin, at one time my KGB counterpart, enthroned himself in the Kremlin. During the Cold War, the KGB was a state within a state. Now the KGB — rechristened FSB — is the state itself. According to a study published in the Russian newspaper Novaya Gazeta, by 2003, some 6,000 former KGB officers were running Russia’s federal and local governments. The respected British newspaper the Guardian reports that President Putin has secretly accumulated over $40 billion, becoming Europe’s richest man. In Russia, the more things change, the more they seem to stay the same.

This brings us back to Kirill/Mikhailov. In 2006 Archbishop Kirill’s personal wealth was estimated at $4 billion by the Moscow News. No wonder. In the mid-1990s, the Russian Orthodox Church’s Department for External Church Relations, managed by Kirill, was granted the privilege of duty-free importation of cigarettes as reward for his loyalty to the KGB. It did not take long for him to become the largest supplier of foreign cigarettes in Russia.

A few years ago, while Kirill was visiting Ukraine as the new Patriarch of Russia, a newspaper published a photo in which the prelate could be seen wearing a Breguet wristwatch, the price of which was estimated at 30,000 euros. The Russian newspaper Kommersant accused Kirill of abusing the privilege of duty-free importation of cigarettes, and dubbed him the “tobacco metropolitan.” Kirill denied having such a watch.

He said the photograph must have been altered by his enemies, and he posted the “real” photograph on his official website. A careful study of this “real” photograph, however, shows that the Breguet watch had been airbrushed off his wrist, but its reflection is still clearly visible on a table surface beneath his arm. Mikhailov and his KGB, rechristened FSB, are now doing their best to airbrush out the apron strings connecting them to liberation theology. Let’s not allow them to succeed.