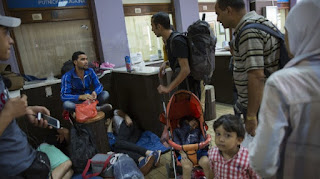 BUDAPEST — Pope Francis’s message Sunday couldn’t have been clearer: With hundreds of thousands of refugees flowing into Europe, Catholics across the continent had a moral duty to help by opening their churches, monasteries and homes as sanctuaries.
On Monday, the church’s spiritual leader for southern Hungary — scene of some of the heaviest migrant flows anywhere in Europe — had a message just as clear: His Holiness is wrong.
“They’re not refugees. This is an invasion,” said Bishop Laszlo Kiss-Rigo, whose dominion stretches across the southern reaches of this predominantly Catholic nation. “They come here with cries of ‘Allahu Akbar.’ They want to take over.”
The bishop’s stark language reflects a broader spiritual struggle in Europe over how to respond to a burgeoning flow of predominantly Muslim men, women and children onto a largely Christian continent.
The pope’s call for compassion and charity is competing with a view most prominently articulated by Hungarian Prime Minister Viktor Orban, who has cast the flow of migrants as a direct challenge to Europe’s Christian character. And in Hungary at least, it’s the prime minister’s view that seems to be winning out.
Even as Catholics in other parts of Europe heeded the pope’s plea for help Monday, there was little evidence here that church leaders were prepared to elevate what has so far been an anemic response to one of the worst humanitarian crises Europe has seen in decades.
And despite the heat that Orban has taken worldwide for attempts to crack down on some of the globe’s most vulnerable people by halting their journeys or throwing them into prison, his stance has seemed to only burnish his reputation here as a no-nonsense nationalist who will defend the country against an onslaught of “tens of millions” of new arrivals.
“I’m in total agreement with the prime minister,” Kiss-Rigo said in an interview Monday.
The pope, by contrast, “doesn’t know the situation.”
The situation, as Kiss-Rigo describes it, is that Europe is being inundated by people who are posing as refugees but actually present a grave threat to the continent’s “Christian, universal values.”
Even though the majority of migrants who have crossed the border in southern Hungary are from Syria — where war has claimed more than 320,000 lives in the past four years — he judged them unworthy of assistance because most of them “have money.”
They leave rubbish in their wake, he said, and refuse when offered food.
“Most of them behave in a way that is very arrogant and cynical,” said Kiss-Rigo, who has been bishop for nine years in an area that is home to some 800,000 Catholics.
Aid workers on the border and at Budapest’s central train station — where hundreds of refugees awaited trains Monday to Western Europe — gave a different account. They described people desperate for assistance and grateful to receive it.
“When I first came to the station, it was filled with children and babies,” said Mark Balazs, a 34-year-old flight attendant. “I have three kids of my own. I imagined what I would do if there was a war here. I’d do the exact same thing they’re doing.”
For the past week, he has spent day and night at the station giving out food, clothes and diapers for Migration Aid, an all-volunteer Hungarian organization that sprang up several months ago to fill the void left by the government and more established charity groups.
The group’s efforts have not gone unnoticed by the migrants.
“You have a good people Hungaria,” was chalked on the station walls Monday as women searched through piles of donated clothes and children played with balls during a rare break in their epic and perilous travels.
But the volunteers are getting little support from larger aid organizations — particularly Christian charities.
Balazs Odor — an official with the Reformed Church in Hungary, the country’s second-largest denomination — acknowledged that faith groups had been slow off the mark in responding to the crisis.
“We were not fast or vocal in giving a clear reaction to the situation. I have to admit that,” he said.
Odor said he rejected Orban’s view that Christianity in Europe is under assault but said the arrival in Europe of hundreds of thousands of Muslims had unquestionably “created anxiety. And that’s politically misused.”
Hungary is not a particularly religious country, with a half-
century of communist rule having done much to curb the church’s influence and Sundays marked by the same thinly populated pews that dominate cathedrals across Europe.
But Orban’s attempts to position the country as a Christian bulwark against a Muslim onslaught strikes a deep chord in the national psyche, said Botond Feledy, a political analyst.
Hungary’s major national holiday still commemorates the country’s turn to Christianity, which dates back over a millennium. And nationalists often cite the country’s 17th-century defeat of its Ottoman occupiers as proof that Hungary is a critical European safeguard against malign influences to the east.
Orban has played the Christian card before, introducing a clause in the constitution that cites “the role of Christianity in preserving nationhood” and promoting religious education in the schools.
The tactic has worked for him, boosting his popularity.
But to Eva Varga, a 63-year-old doctor providing volunteer help to the migrants Monday, a refugee crisis is the wrong time to play religious politics.
“For me, there are no Christian patients and no non-Christian patients,” said Varga, who has provided medical help in countries around the world for the relief organization Hungarian Baptist Aid. “There are only my patients, and I’m obliged to take care of them.”
Gergo Saling contributed to this report.
---

'The God who is enthroned over the world and history as a changeless being is an offence to man. One must deny Him for man’s sake, because he claims for himself the dignity and honour that belong by right to man. We must resist this God, however, not only for man’s sake, but also for God’s sake. He is not the true God at all, but rather a wretched idol. For a God who is only alongside of history, who is not himself history, is a finite God. If we call such a being God, then for the sake of the Absolute we must become absolute atheists. Such a God springs from a rigid worldview; he is the guarantor of the status quo and the enemy of the new.'