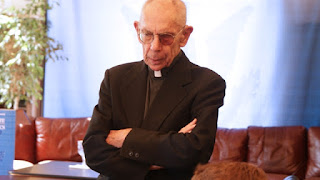 
On Pope Francis and Church Integrity

In the Path to Rome, Belloc remarked that as one gets older he becomes more concerned with the human side of the supernatural Church. This famous walk took place in 1901 when Leo XIII (1810-1903) was still alive in his nineties. He did not resign. Indeed, Leo was in his late sixties when elected. No one at the time expected him to last twenty-five quite fruitful years.
Recently, in what I read and in what I hear from others, there are increasing numbers Catholics who are genuinely concerned about the integrity of the Church. The one thing that Catholicism had going for it, in the eyes of many, was its consistency, its stability of doctrine and practice, its claim that it retained what was “handed down” in its fullness. What is different, as far as I can judge, is not the old complaint, namely, that Catholicism “claims to be true,” but the new unsettlement that it is acting like it does not think it is true. Joel Osteen, the Houston televangelist, when he met Pope Francis recently, praised him not for any doctrinal stability but for the Pope’s inclusiveness in wanting to bring everyone in.
We have seen almost every mainline Protestant church join the forces of modernity. They have accepted the norms of life from the culture rather than standing against it. This fact has often been the origin of a steady stream of Protestants, especially Protestant clergymen, into the Catholic Church. But the Catholic Church, whose intellectual stature was never higher than under John Paul II and Benedict XVI, is now nervously seen by many as “wobbly.” Pope Francis does not consider himself an “intellectual”; he is not overly concerned with intellectual issues. Often, like many of us, he is heard criticizing theologians and academics. He gathers about himself not a few advisors in economics, ecology, or other fields.
A good portion of world opinion, however, expects that the Church, whether it says so or not, now accepts divorce, contraception, abortion, “gay marriage,” and such things, or, if not quite yet, soon will. Francis is their man even when he explicitly denies that he holds these views. What does one say to good people who are troubled about these issues?
---
In the light of such upsetting concerns, however one judges their validity, I have seen several approaches. First, for example, take the issues raised by what the Pope Francis has said about capitalism and ecology. His views are wildly popular in socialist, Marxist, community-development, and “human rights” circles. In these areas, the Pope himself has recognized, along with classic Catholic teaching, that neither the Church nor he himself has any particular competence in these areas. The Pope only claims to be calling attention to grave issues of poverty and pollution. What in concrete needs to be done is up to people with direct responsibility and competence.
The oft-discussed issues of earth warming and whether the Qur’an advocates violence are open to diverse interpretations. Pope Francis maintains that earth warming is a dangerous fact, but insists the Qur’an does not advocate violence and war. Experts can be found who panic about earth warming; we can find Muslim scholars who cannot find violence in the Qur’an. So, we might say that the Pope’s positions are backed by scholarly opinions. The only trouble with this approach is that other scholars in both areas find evidence that the opposite views are more persuasive and valid. What disturbs people is not the Pope’s authority for his views but his seeming unawareness of opposing evidence.
----
The Pope, as I read him, has a strategy. Basically, he does not want to deal with controversial issues, at least the traditional ones, until after people are back in the Church. He figures—he is an optimist here—that there will be time enough to resolve difficulties later. In this sense, he downplays the importance of life issues not because he contests them but because few will listen to reason about the living issues they raise. He also seems to think that academics and clerics who have very dubious ideas can be dealt with in a similar way: listen to them, let them talk all they want, even let them disturb the good souls of ordinary Catholics. No one will be able to say any longer that the Church did not listen to them.
...
The whole world will be looking on. The headlines “Church Changes Doctrine” are, no doubt, already in the “galleys” of many editors’ minds. Pope Francis is a Jesuit, and as such, he is in a unique position that no man in history has ever faced in quite the same way. That is, Jesuits vow obedience to the Pope precisely because Peter’s successor stands for the center of revelation and what it means. Pope Francis is thus, as it were, vowed to himself, to the Lord, to be that rock against which the Gates of Hell shall not prevail.
Are the opinions sketched out here valid? They are opinions that at least provide ways to respond to the many inquirers of those who sense that something is unsettling not outside but inside the Church. That there is also much unsettlement outside the Church is almost too painful to contemplate. Yet, ironically, the common theme in all of Pope Francis’ work thus far has been one of joy. If we combine Pope Francis’ joy with the hope we find in Benedict’s Spe Salvi, we can, I think, relax a bit.