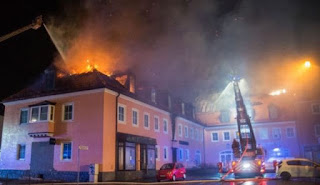 A Syrian refugee has admitted to setting fire to a German shelter where he was staying, spray-painting swastikas on the walls to make it look like a political crime. The asylum seeker said the arson attack was in response to poor conditions at the shelter.
"During police questioning, the man admitted that he had set [a] fire in the cellar of the multi-use building," police spokesman Achim Hansen told NBC News, adding that the refugee had also stated that he “had a lack of hope for the future."
The 26-year-old refugee sprayed three swastikas on the exterior in the building, located in the town of Bingen, in an effort to make it seem like the fire was started by far-right protesters.
The refugee, who says he acted alone, has been sent to jail to await trial. He had been living at the shelter for around six months, according to investigators cited by The Local.A total of 26 people were inside the building when the fire was started on Thursday. Two firefighters and four residents suffered minor injuries as a result of the blaze. In addition to refugees, the building houses migrant workers from other European countries.
Although this particular attack was designed to frame Germany's far-right, other attacks on refugee shelters have indeed been launched by German nationalists.
There were over 800 attacks on refugee shelters in 2015, according to Germany's Criminal Police Office. Those numbers represented a four-fold increase from 2014, when there were 199 cases.
In February, a planned refugee center in Bautzen, Saxony, erupted into flames as onlookers cheered and tried to prevent firefighters from extinguishing the blaze. Later that month, another Saxony building slated to host asylum seekers was hit with multiple gunshots, after previously being flooded and stoned.
An overwhelming 1.1 million refugees came to Germany in 2015, largely due to Chancellor Angela Merkel's open-door policy for refugees fleeing war and persecution. However, many of the country's citizens have lost hope in the government's ability to handle the crisis, with a recent poll showing that 81 percent of people believe the crisis to be “out of control” under Merkel's authority.
Europe continues to face its worst refugee crisis since World War II. Most of the asylum seekers arriving on the continent are from Syria, where 250,000 people have been killed and more than 12 million displaced since the country's civil war began in 2011, according to UN figures.