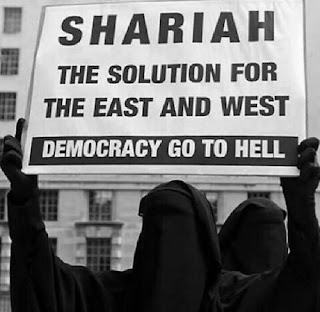 May 1. Mubashir Jamil, a 21-year-old man from Luton, was arrested on suspicion of attempting to travel to Syria and engage in "violent jihad" with the Islamic State. He was charged with "engaging in conduct in preparation for committing acts of terrorism."
May 2. A senior British jihadi who boasted of recruiting hundreds of Britons for the Islamic State was killed in a drone strike in Syria, according to the Independent. Raphael Hostey, also known as Abu Qaqa al-Britani, left Manchester to join the Islamic State in 2013. The 23-year-old graphic designer became a key recruiter of British fighters and jihadi brides for the terror group and was also heavily involved in its propaganda. At least 700 people from the UK have travelled to support or fight for jihadist groups in Iraq and Syria.
May 4. The "Department of Theology" of the Blackburn Muslim Association ruled that it is "not permissible" for a woman to travel more than 48 miles — deemed to be the equivalent of three days walk — without her husband or a close male relative. The group also ruled that men must grow beards and women must cover their faces. The rulings were accompanied by the catchphrase: "Allah knows best."
May 7. Labour Party politician Sadiq Khan was sworn in as mayor of London. He is the first Muslim to lead a major European capital. During the election campaign, Khan faced a steady stream of allegations about his past dealings with Muslim extremists and anti-Semites.
British politician Paul Weston warned that Khan's rise is a harbinger of things to come:

"The previously unthinkable has become the present reality. A Muslim man with way too many extremist links to be entirely coincidental is now the Mayor of London. ... In a couple more decades Britain may well have its first Muslim Prime Minister. ... Reality cannot argue with demographics, so the realistic future for Britain is Islamic."

May 7. Mohammed Shaheen, a 43-year-old father of seven, was sentenced to 16 years in prison for raping underage schoolgirls. Shaheen, an immigrant from Pakistan, told the court he was a devout Muslim who had been framed by his victims. Judge Martin Steiger QC said: "He masqueraded as religious when all along he was behaving in this hypocritical way."
May 8. The Times reported that Britain's biggest Muslim charity will brand hundreds of buses around the country during Ramadan with a slogan proclaiming glory to Allah. The initiative by Islamic Relief, a government-backed organization, is an attempt to "break down barriers" and portray Islam in a positive light. Islamic Relief has paid for hundreds of buses in Birmingham, Bradford Leicester, London and Manchester to carry advertisements with the slogan "Subhan Allah," which means "Glory be to Allah" in Arabic.
May 8. Six Algerian terror suspects with links to al-Qaeda were allowed to stay in Britain after winning a protracted legal battle. The Special Immigration Appeals Commission (SIAC) ruledthat there was a "real risk" the men would be tortured by the Algerian security services if they were deported. This would have violated Article 3 of the Human Rights Act, which guards against "torture or degrading or inhuman treatment."
May 9. A Muslim man who was found guilty of threatening to behead a candidate of the United Kingdom Independence Party (UKIP) had his sentence overturned on appeal. Aftab Ahmed, 45, had been found guilty of making threats to kill David Robinson-Young, but a Newcastle Crown Court judge said he believed that Ahmed did not intend to act on his threat.
May 10. The Greater Manchester Police (GMP) apologized for a counter-terrorism exercise in which a mock suicide bomber shouted "Allahu Akbar" (Allah is the Greatest). Eight hundred volunteers took part in the overnight drill to make it as realistic as possible. Manchester peace activist Erinma Bell criticized the use of a "Muslim terrorist." She said "a terrorist can be anyone" and "we need to move away from stereotypes." A local Muslim leader, Syed Azhar Shah, said it was "shocking to portray Muslims as terrorists" and accused the GMP of "institutional racism." A statement released by GMP said:

"The scenario for this exercise is based on an attack by an extremist Daesh-style organization and the scenario writers have centered the circumstances around previous similar attacks of this nature, mirroring details of past events to make the situation as real life as possible for all of those involved. However, on reflection we acknowledge that it was unacceptable to use this religious phrase immediately before the mock suicide bombing, which so vocally linked this exercise with Islam. We recognize and apologize for the offense that this has caused."

May 10. The trial began of three Muslims who plotted to behead British citizens after being inspired by an Islamic State order "to kill civilians everywhere in the West." The court heard that Haseeb Hamayoon, 29, Yousaf Syed, 20, and his cousin Nadir Syed, 22, planned to carry out a terrorist atrocity after a fatwa was issued by Islamic State spokesman Abu-Mohammad al-Adnani. Hamayoon, who has a Pakistani passport, had bought a "Rambo First Blood II" hunting knife online using his wife's bank account. British born Nadir Syed had stored images of Lee Rigby's killers, and the three men had allegedly shared images of beheadings.
May 11. Prime Minister David Cameron apologized to Suliman Gani, a Muslim extremist, for saying he is a supporter of the Islamic State. Gani said accusations that he backs the Islamic State are defamatory and must be retracted. In a statement, Cameron said he was referring to reports that Gani supports "an" Islamic state rather than "the" Islamic State. The Muslim Council of Britain called on Cameron to repeat his apology in Parliament, and for an "urgent review" of Islamophobia in the Conservative party.
May 15. The BBC's religious output is too Christian, an internal review concluded. A report by Aaqil Ahmed, the BBC's head of religion and ethics, argued that that Muslim, Hindu and Sikh faiths should get more airtime. One Muslim leader suggested the review could lead to Friday prayers from a mosque being broadcast in the same way that Christian church services currently feature in the BBC's programming. Ahmed's appointment to the BBC in 2009 was controversial because of allegations he had shown a pro-Islam bias in his previous role at Channel 4, according to the Telegraph.
May 16. The government confirmed that Sharia-compliant student loans will be offered for the first time in Britain as part of an effort to boost the number of young Muslims applying to university. The new halal (permitted or lawful) finance model complies with Sharia law, which forbids Muslims from taking out loans on which they would be charged interest. In a white paper, the government said:

"My reservation is that it won't get to the root of the problem. ... a lot of Muslim women I know say that the men in their communities just laugh at this proposed investigation, that they will go underground so the investigation will have to be very robust.
"But the aspects which are causing such concerns — such as that a man can divorce his wife by saying 'I divorce you' three times — that is inherent; the right to 'chastise' women is inherent; polygamy is inherent. I don't think those things are a distortion of Sharia law. These are aspects of Sharia law which are unacceptable."

May 27. A British citizen who plotted to carry out a suicide bomb attack at Heathrow Airport wassentenced to 40 years in prison. Minh Quang Pham, 33, was sentenced in New York for travelling to Yemen to train with members of al-Qaeda in the Arabian Peninsula (AQAP). Pham pled guilty to three counts of terrorist-related activity based on his support for the group, but denied he intended to carry out his plot and no attack ever occurred. Pham, a Vietnamese born British convert to Islam, was first arrested in Britain in June 2012 and was extradited to the U.S. in February 2015.
May 29. Music festivals, big sports venues and nightclubs have been placed on "high alert" for potential jihadist attacks, according to a senior anti-terrorism officer interviewed by the Sunday Times. Neil Basu, the deputy assistant commissioner of the Metropolitan Police, said that crowded places — including Glastonbury, billed as the world's largest music festival, which will draw 135,000 people to Somerset from June 22 to 26 — are a major concern for police this summer. Basu warned: "These people are perfectly happy to target civilians with the maximum terror impact. Crowded places were always a concern for us, but now they are right at the top of the agenda."
May 31. The trial began of a Muslim man who tried to decapitate a random stranger in the London Underground. Somalia-born Muhiddin Mire, 30, attacked musician Lyle Zimmerman, 56, at Leytonstone Underground station on December 5 with a knife while yelling, "This is for my Syrian brothers; I am going to spill your blood." The jury was told that after the attack, police found images of Islamic State hostages having their throats cut on Mire's cellphone. The prosecutor said:

"At the end of the assault, when Mr. Zimmerman was lying motionless and defenseless on the floor of the ticket hall, the defendant crouched over him and quite deliberately began to cut Mr. Zimmerman's throat with a knife blade. Mercifully, Mr. Zimmerman survived the ordeal because, although he suffered three jagged wounds to the front of his neck, none of them caused any damage to any of the major blood vessels in that area."