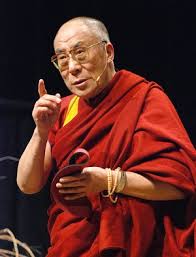 
Dalai Lama: There Are 'Too Many'Refugees in Europe

Well, well. When Donald Trump says Muslim immigration should be temporarily halted until things get sorted out, the media and the left (but I repeat myself) heads explode. Where are those critics when the Dalai Lama says the exact same thing?
In an interview published late last week, the Dalai Lama said that Europe has accepted "too many" refugees, and that they should eventually return to help rebuild their home countries.
According to Digital Journal, the Tibetan spiritual leader said,

"When we look into the face of every single refugee, especially the children and women, we can feel their suffering."

What women and children? They're nearly all adult males.
"A human being who is a bit more fortunate has the duty to help them. On the other hand, there are too many now," he said in the Frankfurter Allgemeine Zeitung. "Europe, for example Germany, cannot become an Arab country," he added with a laugh. "Germany is Germany."
Too late. Germany last year took in 1.1 million purported refugees fleeing war in Syria, Iraq, Afghanistan and other countries.

"There are so many that in practice it becomes difficult."

Yes, to put it mildly.
He added that "from a moral point of view too, I think that the refugees should only be admitted temporarily. The goal should be that they return and help rebuild their countries."
That's not going to happen. That was never the goal.
The Dalai Lama, 80, who has himself lived in exile for over half a century, said in the interview that he hopes to one day return to Tibet.

"Maybe in a few years. If an opportunity for my return arises, or at least for a short visit, that would be a source of great joy."