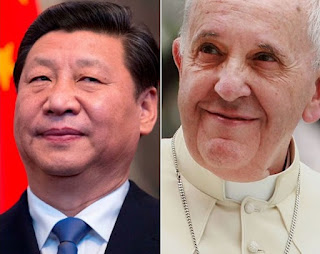 XI: Countries around the world should uphold true multilateralism. We should remove barriers, not erect walls. We should open up, not close off. We should seek integration, not decoupling.

“The most important lesson we can take from these crises is our need to build together, so that there will no longer be any borders, barriers or political walls for us to hide behind. As we all know, we never emerge from a crisis alone, without others.” — Pope Francis’ audio message, BBC ‘Thought for the Day,’ on the occasion of the COP26 Meeting in Glasgow, 31 October 2021.

XI: Small boats may not survive a storm, but a giant ship is strong enough to brave a storm. Thanks to the concerted efforts of the international community, major progress has been made in the global fight against the pandemic.

“No people, no social group can single-handedly achieve peace, prosperity, security and happiness. None. The lesson learned from the recent pandemic is the awareness that we are a global community, all in the same boat.” — Pope Francis on the occasion of the International Day of Multilateralism and Diplomacy for Peace, 24 April 2021.

XI: Acts of single-mindedly building ‘exclusive yards with high walls’ or ‘parallel systems,’ of enthusiastically putting together exclusive small circles or blocs that polarize the world, of overstretching the concept of national security to hold back economic and technological advances of other countries, and of fanning ideological antagonism and politicizing or weaponizing economic, scientific and technological issues, will gravely undercut international efforts to tackle common challenges.

“New walls are erected for self-preservation, the outside world ceases to exist and leaves only “my” world, to the point that others, no longer considered human beings possessed of an inalienable dignity, become only “them”. Once more, we encounter “the temptation to build a culture of walls, to raise walls, walls in the heart, walls on the land, in order to prevent this encounter with other cultures, with other people. And those who raise walls will end up as slaves within the very walls they have built. They are left without horizons, for they lack this interchange with others.” – Pope Francis’ encyclical Fratelli Tutti (All Brothers), 3 October 2020.

XI: Last year, I put forward a Global Development Initiative at the UN General Assembly to draw international attention to the pressing challenges faced by developing countries. The Initiative is a public good open to the whole world, which aims to form synergy with the 2030 Agenda for Sustainable Development and boost common development across the world.

“The 2030 Agenda and the Sustainable Development Goals, approved by more than 190 nations in September 2015, were a great step forward for global dialogue, marking a vitally new and universal solidarity’ (Laudato Si’, 14). Different religious traditions, including the Catholic tradition, have embraced the objectives of sustainable development because they are the result of global participatory processes that, on the one hand, reflect the values of people and, on the other, are sustained by an integral vision of development.” — Pope Francis’ Address to “Religions and the Sustainable Development Goals: Listening to the Cry of the Earth and of the Poor,” 8 March 2019.

XI: We should follow the trend of history, work for a stable international order, advocate common values of humanity, and build a community with a shared future for mankind. We should choose dialogue over confrontation, inclusiveness over exclusion, and stand against all forms of unilateralism, protectionism, hegemony, or power politics.

“The present moment offers a precious opportunity to guide and govern the processes now under way, and to build inclusive societies based on respect for human dignity, tolerance, compassion and mercy.” — Pope Francis’ message to the World Economic Forum, 21 January 2016.

XI: Countries need to strengthen international cooperation against COVID-19, carry out active cooperation on research and development of medicines, jointly build multiple lines of defense against the coronavirus, and speed up efforts to build a global community of health for all. Of particular importance is to fully leverage vaccines as a powerful weapon, ensure their equitable distribution, quicken vaccination and close the global immunization gap, so as to truly safeguard people’s lives, health and livelihoods.

“A comprehensive commitment on the part of the international community is necessary, so that the entire world population can have equal access to essential medical care and vaccines. We can only note with regret that, for large areas of the world, universal access to health care remains an illusion.” — Pope Francis, Address to the Diplomatic Corps Accredited to the Holy See, 10 January 2022.

XI: History has proved time and again that confrontation does not solve problems; it only invites catastrophic consequences. Protectionism and unilateralism can protect no one; they ultimately hurt the interests of others as well as one’s own.

“We are faced, then, with a choice between two possible paths. One path leads to the consolidation of multilateralism as the expression of a renewed sense of global co-responsibility… The other path emphasizes self-sufficiency, nationalism, protectionism, individualism and isolation… It must not prevail.” — Pope Francis’ video message to the 75th Meeting of the UN General Assembly, 25 September 2020.

XI: No matter what difficulties may come our way, we must adhere to a people-centered philosophy of development, place development and livelihoods front and center in global macro-policies, realize the UN’s 2030 Agenda for Sustainable Development.

“We are all members of the one human family. The moral obligation to care for one another flows from this fact, as does the correlative principle of placing the human person, rather than the mere pursuit of power or profit, at the very centre of public policy.” — Pope Francis’ message to the World Economic Forum, 21 January 2020.