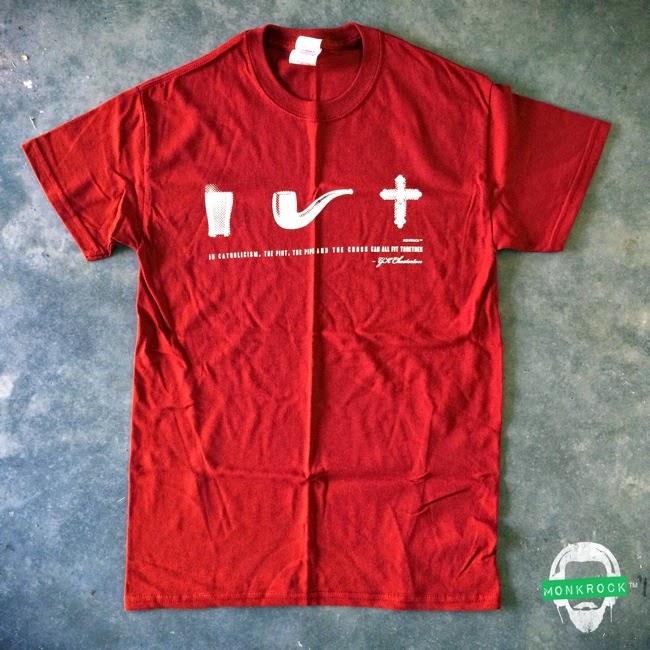 Eu comprei no ano passado a blusa acima, que mostra uma frase de Chesterton: In Catholicism, the Pint, the Pipe and the Cross can all be together (No Catolicismo, a bebida, o charuto, e a cruz podem estar juntos). Se quiser comprar a blusa, clique aqui.

Chesterton the Glutton and the Drunk


When I had the privilege of making the announcement in August, 2013, that the Catholic Church was going to appoint an investigator to look into the possibility of opening the Cause for G.K. Chesterton, there was an immediate and widespread response around the world. While it was generally positive, in fact, uproariously positive, there was also a surprising number of people who were anxious to appoint themselves Devil’s Advocate, as if Satan does not have an easy enough time getting recruits for his work.
The most recent self-appointment is Mr. Steven Drummel, who has made the case that Chesterton cannot be counted among the saints because of his obvious intemperance. The trouble with attacking a giant is that though one imagines the large target as easy to hit, the result is often that one simply gets crushed for his efforts. Mr. Drummel has written an interesting and provocative piece, but he has done himself no favors by going after the giant G.K. Chesterton, first by pointing out that he was in fact a giant, but then by blaming him for it. I’m afraid he has only ended up making himself look. . . small.
My first reaction after reading Mr. Drummel’s piece was not something that Chesterton said (which is usually my first reaction to anything), but something that Jesus said:

Wisdom is justified by her deeds.