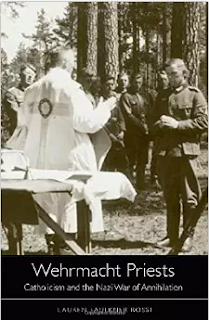 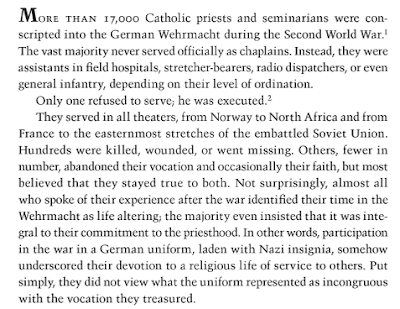 
Anniversaries are crowding in on us this year: it is 70 years since the end of the Second World War; the anniversary of the liberation of Dachau concentration camp was last week; VE Day is tomorrow. All this alongside the general election today. Are all these events linked? Yes, in a way. We are not facing the German elections of 1933, but it is worth remembering that Hitler was voted into power – it wasn’t a Nazi putsch. Voting, or registering “None of the above”, does matter, as Fr Lucie-Smith argued yesterday. How should a Christian vote? Hard to say – though it’s worth noting that the Greens would like to shrink the number of people on the planet and that Ukip is the only party that has included Christianity in its manifesto.
These thoughts follow on from a book I have struggled to read this week; struggled because the topic makes for very gloomy reading. It’s called Wehrmacht Priests: Catholicism and the Nazi War of Annihilation (US,UK) by Lauren Faulkner Rossi and Catholics ought to read it, if only to ask themselves where their ultimate loyalties lie: with their faith or with their country? St Thomas More is famously said to have stated before his execution: “I die the King’s good servant, but God’s first.” It seems this maxim was forgotten or neglected by the German Catholic Church during the whole of the Third Reich.
The author makes it clear she thinks this period was a shameful episode for the Church in Germany. Basically, there was simply no collective or sustained resistance to Nazism on the part of the hierarchy. Their “silence” might have been due to their patriotic feeling, shared by almost all the population, that the Treaty of Versailles was deeply unfair; their mistaken belief that the real enemy to be fought was Bolshevism and thus that Nazism was the lesser evil; and their further mistaken attempt to distinguish between the German army (good) and the Nazi ideology (bad). It is also true that the German hierarchy did not raise its voice to protest about the treatment of the Jews, even though this was being carried on underneath its nose. A latent anti-Semitism was no doubt an influence here, just as it also affected the general population.
In this account there was only one bishop who consistently and courageously spoke out against the Nazi party throughout their 12-year regime: this was Konrad von Preysing, Bishop of Berlin; indeed he did more; with the help of a lay assistant, Margarete Sommer, he did his best to help the plight of the Jews in Berlin. Bishop Clemens von Galen of Munster did protest against the euthanasia programme (although he left it until 1941), but his voice was not representative of the German hierarchy as a whole.
...
It is counter-factual to ask what would have happened if the German bishops had collectively stood up to Hitler – who craved respectability and legitimacy – and influenced their priests to do the same. It didn’t happen so we’ll never know. To his credit, in our own day Pope Francis is trying to show Catholics that to follow Christ must always be the first imperative. To try to work out “the lesser of two evils” gets you nowhere; as the Nazis versus the Bolsheviks argument demonstrates, it simply ends up becoming the greater evil in its turn.
What are the lessons to learn from this book? That we must always speak out against the Government when it challenges our conscience as Christians – and that during a general election our protest is the ballot box.
--