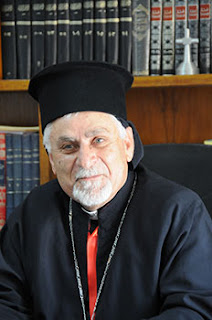 Mosul archbishop's plea to the West: Save us from ISIS

New York City, N.Y., Jun 13, 2015 / 07:43 am (Aid to the Church in Need).- A leading Iraqi prelate has called on world governments to increase their efforts to defeat ISIS and restore land and property to some 120,000 exiled Iraqi Christians.
Marking the first anniversary of ISIS’s capture of Mosul, Syrian Catholic Archbishop Yohanna Mouche called on “people who have the responsibility” to come to the rescue of the ousted Christian communities, whose people, he added, long to go home.
In an interview with international Catholic charity Aid to the Church in Need, the archbishop said that military action is the “best solution.”“We ask everyone to put pressure on the people who have the responsibility to free the [towns and villages] as soon as possible so the people can come back and live in peace in their homes and continue their lives there,” he said.
The archbishop’s comments reflect ongoing frustration felt by a number of senior Middle East clergy about what they perceive as the West’s reluctance to commit to a full-scale intervention to confront and overcome extremism in the region – a move many Church leaders opposed until very recently.
Archbishop Mouche also said that if the West is unable to redouble its efforts in the fight against ISIS, it should open its doors to Christians and other minorities seeking asylum.“I am calling on the international community: if they cannot protect us, then they must open their doors and help us start a new life elsewhere,” he said, adding, however that “we would prefer to remain in Iraq and be protected here.”
Speaking of his own hardship, the prelate said: “I am like someone who is dreaming or drunk. I can’t understand what is going on around me. It is a nightmare.”
Asked about widespread reports of destruction of religious artifacts and Churches buildings in Mosul, he said his contacts with the city had been severed. But he confirmed that “all our heritage is in Mosul, and in Qaraqosh,” on the Nineveh Plain. He singled out the monastery of St Behnam, which dates back to the fourth century AD. The monastery is rumored to have been partially destroyed by ISIS.
“We have no news about our churches and monasteries, because we have no-one left in Mosul to report on it,” the archbishop concluded.