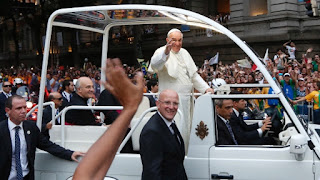 Italian and Kosovan police have arrested four Kosovars suspected of being part of a jihadist cell that spread Islamist propaganda and made threats against Pope Francis, justice officials said on Tuesday.
The four, three of whom were arrested in Italy and one in Kosovo, are all suspected of "condoning terrorism" and "inciting racial hatred", Italian police said in a statement.

A police official said the four were very active on the Internet, promoting their pro-jihadist cause, but did not appear to have been involved in any specific plots.

"They were threatening the pope, celebrating the recent attacks in Paris and threatening the former U.S. ambassador to Kosovo," said Carmine Esposito, a police chief in the northern Italian city of Brescia, where the investigation was based.

One of their messages read: "Remember there won't be another pope after this one. This is the last one."

Two of those seized in Italy will be expelled shortly, while the third will be allowed to stay in the country but put under special surveillance as the investigation continues.

The fourth suspect, named as Samet Imishti, was said to be the leader of the group and had combat experience outside Kosovo. He was arrested in a village in the east of Kosovo.

Italy has increased its controls on Islamist suspects in the wake of the Nov. 13 attacks in Paris that killed 130. Last week it expelled four Moroccans suspected of promoting jihadism.