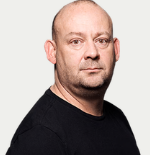 Just when you thought the Anglicans couldn’t stoop much lower, in a disgusting article published, predictably, on Christmas Eve, Anglican priest-journalist Giles Fraser not only publicly denies the Virgin Birth, but he ridicules the idea, proposes that the Blessed Virgin Mary was just another teen fornicator and that it’s probably a good thing that Jesus was a bastard conceived when Mary had a romp with a Roman soldier.I’m surprised that he didn’t title his article, “That’s Why Our Lady is a Tramp”
The crass arrogance of Fraser’s article in London’s  The Guardian is only superseded by its ignorance. Fraser writes,

The earliest polemic against Christianity focused on the circumstances of Jesus’s birth. “We have not been born of fornication,” says a hostile gathering to Jesus in John’s gospel. The implication being: we weren’t, but you were. In the second century, the Greek writer Celsus wrote a book about how Jesus was the illegitimate low-birth offspring of a spinner called Mary and a Roman soldier called Panthera. The implication may also have been that she was raped. Various later rabbinic texts refer to him as Jesus ben Pandera. All of which was intended as an insult: Jesus was a bastard. Obviously the son of God couldn’t be a bastard. So, the argument goes, Jesus was not the son of God.
The idea that Jesus was born of “pure virgin” could well have been a reaction to these insults.


Errm. Were you nodding off in your New Testament class Giles?

Or maybe not. Knowing the Anglican church, your education was more about left wing politics than something called theology or church history. I did my training as an Anglican and I have to admit there was zero talk of the Blessed Virgin and no education about the origins of Marian devotion. I can remember many years later bumping into one of my old tutors who had become an Anglican bishop and was the Archbishop of Canterbury’s right hand man. When he learned I had become a Catholic he said with a straight face, “The Catholics have a real problem with Mariolatry.” I was aghast. The man really thought Catholics worship Mary. When one meets incompetence and ignorance of such a degree at that level one is dumbstruck.

It turns out that Giles Fraser is an expert on Nietzsche and attended the Protestant liberal Ripon College to study theology, so I guess we can’t expect him to have much understanding of Catholicism, and like most Protestants, when it comes to Mary, a first grader in a Catholic school knows more than he does.

To put the record straight, Revd Fraser suggests that Mary’s virginity was a reaction to early polemics against Christianity. Really? Let’s look at the facts.

Celsus was a Greek philosopher who attacked Christianity in his work written around 177 AD. A document Revd Fraser doesn’t mention because I expect he doesn’t even know about it, is The Protoevangelium of James. The Protoevangelium (sometimes called the Gospel of James) is dated, at the latest, at around 145 AD and many scholars think it may be as early as 120 AD using materials and oral traditions from the Jerusalem church from even earlier. The point is that the Protoevangelium of James is our source for the stories of Mary’s birth, childhood and consecration to God. Most importantly the Protoevangelium is a complete defense not only of Mary’s perpetual virginity, but the truth not just of the Virginal Conception of the Lord, but also of the Virgin Birth. (For those who are unfamiliar with the fullness of Catholic belief, Mary’s virginity was also preserved through the birth process.)

So Ronald Hock, a foremost scholar on the document writes,

… a major development found in the Protevangelium of James is this: “Mary, the central character, is no longer a virgin in the ordinary sense of a young woman of marriageable age, but a virgin of extraordinary purity and unending duration.” Hock goes on to argue: “Indeed, Mary’s purity is so emphasized that it becomes thematic and thus answers the fundamental question which guides the narrative: why Mary, of all the virgins in Israel, was chosen to be the mother of the son of God. The answer: no one could have been any purer.


The earlier date of the Protoevangelium and its origins in even earlier oral traditions from the Jerusalem area prove that the idea of the Virgin Birth was not a reaction to Celsus’ criticism, but just the reverse–Celsus was attacking a belief that was already fully established within the Christian community. When you add to the fact that the gospels of Luke and Matthew (which must be dated before 65 AD) clearly affirm the Virgin Birth, Revd Fraser’s shallow and vulgar supposition is shattered.
Revd Fraser may not believe in the Virginal Conception of our Lord or the Virgin Birth, and that is his right. After all, denying these cardinal Christian doctrines is pretty much par for the course with Anglican clergy these days. Of course most of them don’t deny them quite as coarsely and blasphemously as Revd Fraser does. They’re English and middle class. They must preserve appearances. So they usually say that they affirm the Virgin Birth, but what they mean is that “Mary was really just a good Jewish girl.” The dots they never seem to connect are that if Mary got pregnant out of wedlock, then a “good Jewish girl” is exactly what she was not.

Fraser admits this, and not content to impugn the Blessed Virgin’s purity he goes on to rubbish the whole idea of sexual chastity and then fire internet atheist type pot shots at the Holy Family itself...

With a twisted logic which I wish I could call ingenious, Fraser writes,


Furthermore, Jesus didn’t much care for the whole nuclear family thing, insisting that the most important paternity one could claim comes from God, not from one’s biological parents. Hence the Christian requirement to be born a second time – the water of baptism being more existentially prevailing than the blood of family. This, as St Paul puts it, is a metaphorical rebirth by adoption into a new, non-biological family. Which is why, to my mind, the best Christmas gatherings reflect this – when those seated around the table are, as well as blood relatives, an assortment of “aunties” and “uncles”, adopted as part of an extended family. Or, even more radically, when Christmas lunch is cooked with strangers; the lost, the lonely and the homeless.
None of which is to disparage Mary one bit. A spirited young woman from Galilee, pregnant and unmarried, she sung about how God would pull down the mighty from their thrones and lift up the lowly. It doesn’t matter where you come from or who your parents are. Early Christians answered the likes of Celsus in the wrong way. When they charged Jesus with being illegitimate, they should simply have replied: “So what if he was?”


Surprise, surprise! It turns out that Revd Fraser is not only a political left winger, but he’s a strong advocate for the LGBT agenda with its denigration of the family.

So in a national paper on Christmas Eve an Anglican priest writes a scandalous article claiming that Mary was a spunky teen sex kitten, Jesus was illegitimate and that’s not only perfectly okay, but its actually preferable to such boring, uptight, repressive concepts like chastity, family fidelity and the Holy Family as a model for human happiness, Christian perfection and a stable society.

Furthermore, didn’t the vicar follow his train of thought? If Mary was not a virgin then she conceived Jesus through natural means. If that is true then some fellow–maybe Joseph–maybe who knows–is Jesus’ father, and if some one night stand stud is Jesus’ father then God is not his father, and if God is not his father, then he’s not God’s Son and if he’s not God’s son, then the whole doctrine of the incarnation is false too, and hey, what a smart thing for a Christian minister to publish in a popular newspaper for Christmas Eve!

Not only does a high ranking Anglican priest (Fraser is a former canon of St Paul’s Cathedral, a contributor to BBC radio’s religious output and a syndicated national columnist) publicly spit in the face of the Blessed Virgin Mary and deny the incarnation of the Son of God,  but in doing so he just as surely insults all his fellow religionists who do actually believe the Christian faith not to mention flipping the bird to over a billion Catholics from the Holy Father down to the simplest, devout Catholic child.

This outrage is just as public and just as blasphemous, ignorant and despicable as the ISIS terrorists who haul statues of Mary out of Catholic churches, smash them with a rifle and urinate on them.

And from the Anglican hierarchy? Any hint that what Fraser has written is perhaps a little bit out of line? Any suggestion that it might have been ecumenically insensitive? Was there any sort of reproof of Revd Fraser?

Not a word, and their silence shouts out that most Anglican bishops, theologians and clergy think Rev’d Fraser is a pretty smart guy because he has put into print what most of them think anyway.