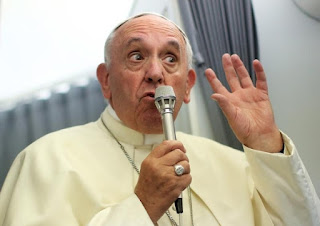 ABOARD THE PAPAL PLANE, November 30, 2015 (LifeSiteNews) -- On the plane returning from his journey to Africa today Pope Francis made his clearest remarks in condemnation of ‘fundamentalist’ Catholics.

"Fundamentalism is a sickness that is in all religions," Francis said, as reported by the National Catholic Reporter’s Vatican correspondent, Joshua McElwee, and similarly by other journalists on the plane.  "We Catholics have some -- and not some, many -- who believe in the absolute truth and go ahead dirtying the other with calumny, with disinformation, and doing evil."

"They do evil," said the pope. "I say this because it is my church."

"We have to combat it," he said. "Religious fundamentalism is not religious, because it lacks God. It is idolatry, like the idolatry of money."

Turning to Islam, the pope spoke of his friendship with a Muslim, adding, “You cannot cancel out a religion because there are some groups, or many groups in a certain point of history, of fundamentalists.”

"Like everything, there are religious people with values and those without," he said. "But how many wars … have Christians made? The sacking of Rome was not done by Muslims, eh?"
STORY: Vatican’s liturgy chief contradicts Pope Francis on Communion for non-Catholics
On the same flight a journalist asked about the use of condoms in the fight against AIDS and if it was time for the Church to change its position.

The pope acknowledged that condoms are one method of prevention, saying that the Church was faced with a perplexity of whether to follow the fifth commandment (Thou shalt not kill) “or that sexual relations are open to life.”

He dismissed this however as ‘not the problem’ and said it reminded him of the question asked Jesus, “Tell me, teacher, is it lawful to heal on the Sabbath? Is it obligatory to heal?’

Catholic News Agency carries the fullest rendition of the pope’s quotes on the matter, relating his words thus:


“Let’s not talk about if one can use this type of patch or that for a small wound, the serious wound is social injustice, environmental injustice,” Pope Francis continued. “I don’t like to go down to reflections on such case studies when people die due to a lack of water, hunger, environment...when all are cured, when there aren’t these illnesses, tragedies, that man makes, whether for social injustice or to earn more money – I think of the trafficking of arms – when these problems are no longer there, I think we can ask the question ‘Is it lawful to heal on the Sabbath?’”
“Because, if the trafficking of arms continues, wars are the biggest cause of mortality...I would say not to think about whether it’s lawful or not to heal on the Sabbath, I would say to humanity: ‘make justice,’ and when all are cured, when there is no more injustice, we can talk about the Sabbath.”

While in Africa the pope used very strong language to promote the climate change agreement at the Paris climate summit that started today. He said it would be a “catastrophe” if it did not achieve acceptance in Paris in the coming days and added that the decision came down to the choice “either to improve or to destroy the environment.”

Speaking at the United Nations center in Nairobi on November 26, Pope Francis said, “In a few days an important meeting on climate change will be held in Paris, where the international community as such will once again confront these issues. It would be sad, and I dare say even catastrophic, were particular interests to prevail over the common good and lead to manipulating information in order to protect their own plans and projects.”