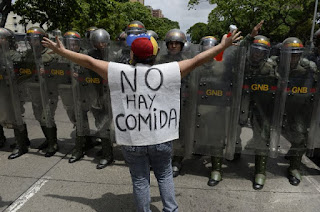 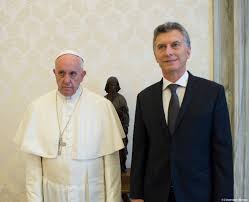 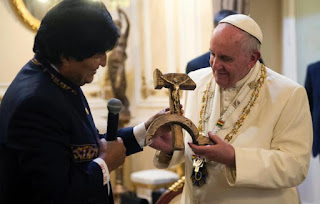 
Pope Francis, Populism, and the Agony of Latin America

May 22, 2016
As populist regimes implode across Latin America, it’s unclear that the Catholic Church in the age of Francis is well-equipped to cope with whatever comes next.
Dr. Samuel Gregg


Venezuela is now in an advanced state of political and economic collapse. Such is the fruit of seventeen years of the “21st century socialism” pioneered by Hugo Chávez and pursued by his successor Nicolás Maduro. On a daily basis, the reality of Venezuelans is one of empty shops, massive corruption, triple-digit inflation, an absence of necessities like food and medicine, and omnipresent violence as law and order breaks down. This is the logical consequence of a populist regime that, in the name of “the people,” nationalized entire industries, demolished the central bank’s independence, ploughed oil-revenues into inefficient and corrupt state-owned enterprises, printed money to cover escalating government spending, and then tried to control the rapidly-deteriorating situation through price and currency controls.

Politically-speaking, Venezuela is now one of the world’s most polarized and repressed societies. The government regularly uses the police and its own “national militia” to terrorize its critics. Most of the press has been muzzled and the judiciary’s independence severely compromised. Civil society has, for all intents and purposes, been pulverized—all in the name of the people’s socialist revolution.
The one institution that’s maintained its integrity in this midst of Venezuela’s disarray is the Catholic Church. Catholic university students have played a central role in bringing the regime’s abuses to international attention. Likewise, Venezuela’s Catholic bishops have been unstinting in their criticism of the Chavistas’ economic and political experimentation. In January 2015, for instance, the Venezuelan bishops’ conference formally denounced the nation’s economic crisis as the result of “a “politico-economic system of a socialist, Marxist, or Communist nature.” That’s strong language. The bishops also condemned the regime’s demonization of its opponents, its demagogic language, its systematic violation of human rights, the imprisonment of thousands of government opponents, and the torture of political prisoners.

The Church and the populists
Given these facts, many have wondered why, of all the Latin American heads of states who could have attended the Pontifical Academy of Social Sciences recent conference to mark the 25th anniversary of Saint John Paul II’s encyclical Centesimus Annus, the only two present were left-wing populists: Ecuador’s Rafael Correa and Bolivia’s Evo Morales. Are we to believe that not a single other serving Latin American head of state was able and willing to attend?
Since Pope Francis often states that realities are more important than ideas, let’s recall some basic realities about presidents Correa and Morales. Both are professed admirers of Chávez and committed to what Correa calls “socialism of the 21st century” or what Morales describes as “communitarian socialism.”

Both men have also followed the classic populist playbook. This involves (1) dismantling constitutional restraints on power; (2) blaming their nations’ problems on foreigners and foreign interests; (3) following a political logic of internal confrontation with those designated as “enemies of the people”; (4) fostering a cult of personality around a charismatic leader; and (5) creating large constituencies of supporters through disbursement of state largesse. The result has not only been political oppression. The economies of Bolivia and Ecuador are now formally classified as “repressed” in the 2016Index of Economic Freedom. That means they are among the least free, most corrupt, and statist in the world.

The fact, however, that Correa and Morales were invited to speak at a conference at the Holy See reflects the Church’s ambiguous relationship with left-populist movements and governments in recent years. The Venezuelan bishops’ willingness, for instance, to name and shame a populist regime so directly for its destructive policies is the exception rather than the rule.

During his years as Archbishop of Buenos Aires, Pope Francis was censorious, sometimes vividly, of aspects of the populist presidencies of Néstor and Cristina Kirchner. Yet in July 2015, the pope appeared with Morales before the “Second World Meeting of Popular Movements” and delivered a speech which had more than a populistedge to it. Indeed, in the numerous addresses, press conferences, and interviews given by Francis since becoming pope, it’s hard to find any clear criticism of left-populist policies that comes close to matching his impassioned denouncements of market economies.

---
Opportunity in the darkness?
The good news for Latin America is that populist movements and governments are on the wane. Late last year, the main Perónist candidate for the Argentine presidency was defeated in national elections. In February this year, Evo Morales lost a referendum that would have permitted him to seek a fourth term. In Venezuela, the opposition now controls the National Assembly and is trying to force a deeply-unpopular Maduro into a recall election.

For the Catholic Church, however, the question is what it can learn from populism’s failures. One step forward would be for the Church in different Latin American nations to ask itself some serious questions about the degree to which populist language and preoccupations have shaped its engagement with political and economic issues.

One might also ask if some Catholics’ constant invocation of “neoliberalism” (or “imperialism,” “the anonymous influence of mammon”, “neoliberal lords of capital,” “markets that kill,” or name-your-populist-slogan) as a primary cause of Latin America’s problems reflects an unwillingness to accept that many of the region’s difficulties have resulted from choices made by Latin Americans. After all, the Chávezs, Kirchners, Peróns, Morales, Correas and Maduros of Latin America were all democratically elected. Perón wasn’t imposed upon Argentina by foreign corporations. No Western government forced Venezuela down its present path to anarchy. And if anyone’s propping up the increasingly brutal Maduros regime, it’s surely the crony-Communist prison-camp otherwise known as Cuba.

It’s an open question how many Latin American Catholic leaders would be willing to engage in such soul-searching. In many respects, it’s easier to chase phantoms or excoriate anonymous actors “out there.” The work of helping societies which take liberty and justice seriously to grow out of the rubble of populism is harder, less glamorous, and very much a long-term project—one which requires acceptance that preserving and promoting freedom, rule of law, and social justice rightly-understood actually requires restraints on the popular will.

The sad irony is that as populist movements and governments falter in Latin America, they’re on the march throughout the rest of the world. Given their recent experiences, Catholics throughout Latin America have a unique opportunity to help the universal Church respond to a phenomenon that represents a significant threat to nations which aspire to be free and just. In light, however, of its recent past and some of its on-going preoccupations, Latin American Catholicism’s ability to do so is presently, at best, uncertain.