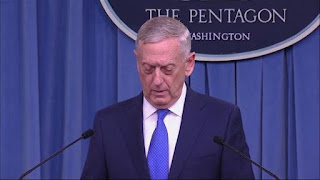 
Washington (AFP) - President Donald Trump has instructed the Pentagon to "annihilate" the Islamic State group in Syria in a bid to prevent escaped foreign fighters from returning home, Defense Secretary Jim Mattis said Friday.
The move to encircle then kill as many jihadists in place as possible -- rather than letting them exit a city and targeting them as they flee -- reflects an increased urgency to stop battle-hardened jihadists bringing their military expertise and ideology back to European capitals and other areas.
The president has "directed a tactical shift from shoving ISIS out of safe locations in an attrition fight to surrounding the enemy in their strongholds so we can annihilate ISIS," Mattis said, using an acronym for IS.
"The intent is to prevent the return home of escaped foreign fighters."
Trump, who campaigned on a pledge to quickly defeat IS, signed an executive order soon after taking office giving his generals 30 days to come up with a revised plan to wipe the jihadists out.
The review resulted in the new "annihilation campaign" and saw commanders gain greater autonomy to make battlefield decisions.
Critics of Barack Obama's administration frequently complained of White House micromanagement and a lengthy approval process causing delays on the ground.
Mattis called foreign fighters a "strategic threat" should they return home and said the annihilation effort would prevent the problem from being transplanted from one location to another.
- Arming the Kurds -
The US-led coalition has been battling IS since late summer 2014, supporting local fighters on the ground with a combination of considerable air support, training and weaponry.
Trump this month authorized the United States to arm the Kurdish faction of an alliance fighting IS in northern Syria, much to the consternation of Turkey, which views them as terrorists.
Though the jihadists have lost 55 percent of the territory they once held in Iraq and Syria and over four million people have been liberated, IS still controls the Syrian stronghold Raqa, swaths of the Euphrates River valley and other areas including a small part of Mosul in Iraq.
Operations in Syria are further complicated by the country's tangled knot of groups fighting in the civil war.
Russia joined that conflict in late 2015 to prop up President Bashar al-Assad, bringing a new dimension of complexity and risk.
General Joe Dunford, who chairs the Joint Chiefs of Staff, noted the US is working successfully with Russia to "deconflict" military operations in Syria.
The two sides established a hotline to inform each other of their forces' location to avoid any mishaps.
Dunford hinted the US had a "proposal" to further enhance deconfliction, but he didn't give any details.
"My sense is that the Russians are as enthusiastic as we are to deconflict operations and ensure that we can continue to take the campaign to ISIS and ensure the safety of our personnel," he said.
Separately, the Pentagon announced that Dunford has been nominated to serve a second two-year term in his job as the country's top military officer.