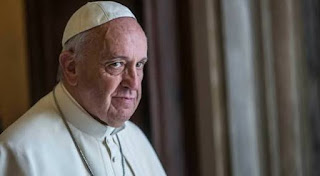 The silent Popes: Why Francis and Benedict won't answer the accusations dividing their church

Since retiring in 2013, Pope Emeritus Benedict XVI has lived a quiet, almost cloistered life. Now 91, friends say that he is frail but mentally sharp.
In his farewell address as Pope, Benedict promised to stay "hidden" from the world, even as he knew his unique personal history would make a complete disappearance nearly impossible.
Private letters between Benedict and a German cardinal published last week in Germany reveal his concern for privacy, and that he not be seen as interfering in church matters.
In one letter, Benedict defends his decision to resign, when he became the first Pope in 600 years to abdicate St. Peter's Throne.
With 'pope emeritus,' I tried to create a situation in which I am absolutely not accessible to the media and in which it is completely clear that there is only one pope," he wrote.
But Benedict's decision to retire as "pope emeritus" has had its own complications. Some conservative Catholics look to him as an anti-Pope, or at least an anti-Francis.
The Rev. Joseph Fessio, an American Jesuit who studied under Benedict and has published his works at Ignatius Press, said the former Pope likely knows of the efforts to pit him against Francis.
"In some ways, he has become the face of 'the Resistance,' " Fessio said, "even though he hasn't done anything to be a resistor."
When Benedict does make public remarks, conservatives often scour them for hints of unhappiness at the church's current situation, or leader.
Last year, a Catholic website ran a piece under the headline "Benedict XVI is silent, but we all know what he thinks."
In the piece, the author argues that Benedict's praise of a deceased cardinal's faith in the church, that he held faith in the church "even if at times the ship is almost filled to the point of shipwreck," could be interpreted as a dig at Francis. (The late Cardinal Joachim Meisnerhad also publicly questioned Francis' decision to open the door for remarried Catholics to receive Communion.)
Benedict's longtime aide, Archbishop Georg Ganswein, called the interpretations of the former Pope's remarks "stupid." But Fessio isn't so sure.
"He's got a very wry sense of humor, and he understates things," Fessio said. "He's not going to say, 'The church is a mess under Francis.' But his support for Meisner was a semi-coded message that he is aware of what's going on in the church right now."
Ganswein has said the former Pope will not comment on Vigano's letter, knocking down reports that he had approved its contents as "fake news."
Besides a reluctance to be seen as interfering, Benedict may have other reasons to hold his tongue, some Catholics say.
He was Pope from 2005 to 2013, when much of the alleged misconduct outlined in Vigano's letter took place. Even allies acknowledge that Benedict did not lead the Vatican curia with a firm hand.
"When it comes to Benedict, it's damned if you did, and damned if you didn't," said Paul Elie, a Catholic journalist who has written about the relationship between the two popes.
If Benedict knew about the allegations against McCarrick and didn't put him under sanctions, that's not good," Elie said. "And if Benedict didn't know about the allegations, that's not good either."
But Fessio and other Catholics say Francis should answer Vigano's charges, instead of making vague remarks about "scandal" and "division" during morning homilies at Casa Santa Marta, his Roman residence.
"He's attacking Vigano and everyone who is asking for answers," Fessio said. "I just find that deplorable. Be a man. Stand up and answer the questions."