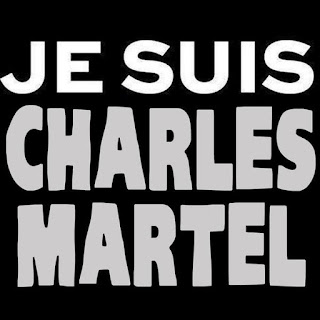 
Charles Martel, “The Hammer”, led a life of conflict.  An illegitimate son of Pepin of Herstal, Mayor of the Palace and the true power behind the Merovingian puppet kings, after the death of his father he had to fight his father’s legitimate offspring who sought to deprive him of any share in his father’s inheritance.  Fortunately for Charles a streak of military genius ran through him, and he won battles against the odds, using force multiplying stratagems, including feigned retreats, and attacking in the middle of the day when armies of his time normally took a siesta.  By 717 he was in control of Neustria, showing mercy unusual for his day in letting his defeated adversaries live and treating them with kindness.

The 28 year old ruler now entered a round of endless wars with neighboring kingdoms, gradually extending his power, and building up a professional force of infantry to supplement the peasant levies that made up the vast bulk of most Frankish armies.

A friend and patron of Saint Boniface, he also began the alliance between the rulers of the Franks and the Popes.  He contributed much land to the Church, but roused ecclesiastical ire when he took some back to support his troops.  He might have been excommunicated if both Church and State had not suddenly confronted a common foe.

In 711 the forces of Islam began the conquest of Spain, helped along by Christian traitors.  Within a decade almost all of Spain had fallen, with small proto-kingdoms of Spaniards clinging to a precarious independence in the mountains of northern Spain.  Mohammed had died less than a century before in 632, and in that intervening period Islam had conquered the Middle East, northern Africa and seemed poised to do the same in Europe against the petty Christian kingdoms that specialized in ceaseless internecine war, seemingly weakening themselves before  their Islamic foes lifted a finger.

With Spain subdued, Muslim raids into what is now France became common.  In 732 Abd-al-Raḥmân, governor of Muslim Spain, led a predominantly cavalry army of 25,000 men north on a great raid beyond the Pyrenees, perhaps the prelude to a war of  conquest.

Charles Martel rallied together an infantry army of 15,000, and in early October 732 his army and that of Abd-al-Raḥmân confronted each other for seven days outside of Tours, Martel making certain to occupy the high ground.   Martel had his army drawn up in a huge phalanx.  Tiring of the stalemate, on October 10, 732 Abd-al-Raḥmân launched cavalry charge after cavalry charge against the Franks.  A Muslim chronicler tells us what happened next:

And in the shock of the battle the men of the North seemed like a sea that cannot be moved. Firmly they stood, one close to another, forming as it were a bulwark of ice; and with great blows of their swords they hewed down the Arabs. Drawn up in a band around their chief, the people of the Austrasians carried all before them. Their tireless hands drove their swords down to the breasts [of the foe].

Martel launched an attack on the enemy camp, causing Abd-al-Raḥmân to order a retreat to his camp.  The retreat became a rout after Abd-al-Raḥmân  was killed in the fighting.
A Christian chronicle sums up the outcome of Tours:

Prince Charles boldly drew up his battle lines against them [the Arabs] and the warrior rushed in against them. With Christ’s help he overturned their tents, and hastened to battle to grind them small in slaughter. The king Abdirama having been killed, he destroyed [them], driving forth the army, he fought and won. Thus did the victor triumph over his enemies.