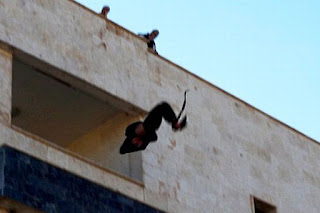 Vejamos parte do texto do site The Mirror.

The 15-year-old boy was arrested by ISIS militants on charges of homosexuality and he was thrown from the top of a building in central Deir ez-Zor, Syria.

ISIS terror thugs killed a teenage boy for being 'gay' - but the man who raped him was just demoted and sent to the front lines.
The 15-year-old boy was arrested by ISIS militants on charges of homosexuality and he was thrown from the top of a building in central Deir ez-Zor, Syria.
“The horrific execution took place in front of a large crowd,” a local media activist who witnessed the killing told Syrian news agency ARA .
The teen was reportedly captured "in the house of an ISIS leader" on Thursday.
"The boy was accused of being engaged in a homosexual relation with the prominent ISIS officer Abu Zaid al-Jazrawi," said Sarai al-Din.
The Sharia Court in Deir ez-Zor demanded Abu Zaid die for being homosexual, but ISIS commanders intervened and demanded he be sent to fight in Iraq instead.
"Abu Zaid was forced to leave Syria and join the fighting fronts in northwestern Iraq. The decision has been taken by the ISIS leadership," al-Din said.
Islamic State has suffered She also said that persecution of LGBT people in Iraq and Syria began long before the emergence of ISIS.
Stern said: "In addition to men perceived as gay, trans-identified people and lesbians are among those who have been raped and killed," she added.