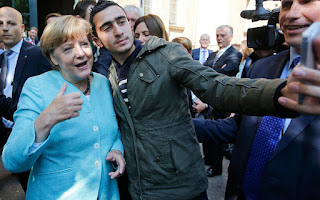 The German government agreed on a proposal Wednesday to outlaw child marriages after finding more than 1,500 cases of immigrant minors having adult spouses.
The Central Register of Foreign Nationals has documented a surge in child marriages in recent years. As of July 2016, 1,500 minors of non-German background were registered as married, including 361 under the age of 14.
The largest group of child brides, 664 minors, come from Syria followed by Afghanistan and Iraq.
“Children do not belong at the wedding altar, they belong in school,” Justice Minister Heiko Maas said Wednesday. “We cannot tolerate any marriages that might harm the natural development of minors.”

Sweden: Muslims throwstones at police officers arresting Stockholm jihad attack suspects
APRIL 9, 2017 6:44 AM BY ROBERT SPENCER
“Swedish anti-terror police – including a Muslim officer praised by colleagues – are pelted with STONES while arresting Stockholm attack suspects near migrant district Trump called a ‘no-go zone,'” by Jake Wallis Simons and Paul Thompson, Mailonline, April 8, 2017:
Police officers responding to the Stockholm terror atrocity were attacked by a gang of youths who pelted them with stones last night, Swedish policemen have said.
The attack happened last night near Rinkeby, part of the ‘immigrant no-go zone’ that gained notoriety when President Trump referred to it in a controversial speech in February.
It is thought that the officers were taking part in an operation to arrest a 17-year-old and his mother at an address linked to the 39-year-old prime suspect.
Both have since been released without charge.
‘During the night my colleagues were exposed to stone throwing in [the suburb of] Tensta, in the middle of an ongoing terror operation.
‘Some people will never learn,’ Abdallah Ahmed, a police officer, said in a social media post.
‘To terror I want to say one thing, in pure Swedish: go to hell. My thoughts go to those affected in every way.’


Earlier today, at the address near Tensta that was raided last night, the 17-year-old who had been arrested denied any connection to the 39-year-old terrorist….