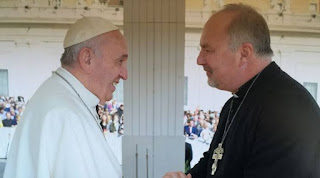 ISLE OF MAN (ChurchMilitant.com) - An internationally renowned Anglican bishop and former chaplain to Her Majesty Queen Elizabeth II is leaving the Anglican Church to become a Catholic.

Bishop Gavin Ashenden will be received into full communion by Shrewsbury's Bp. Mark Davies on the fourth Sunday of Advent at Shrewsbury Cathedral, England.
The outspoken prelate became a global media celebrity after he objected to the reading of the Koran at St. Mary's Episcopal Cathedral in Glasgow, Scotland.
The Koranic chapter on Mary, read from the lectern at the service of Holy Communion, on the Feast of the Epiphany 2017, explicitly denied the divinity of Jesus.
Under pressure from Buckingham Palace, Dr. Ashenden resigned his royal chaplaincy in order to be free to challenge the rising tide of apostasy in the Church of England.
Later that year, Ashenden was consecrated a missionary bishop to the United Kingdom and Europe by the Christian Episcopal Church to provide episcopal cover to traditionalist Anglicans leaving the Church of England.
...
A commentator for various media outlets, including the BBC, Ashenden revealed three major truths that led him to Catholicism.


The first was an examination of the encounter between the children and our Lady at Garabandal in 1963.
"Curious and skeptical, I was watching the film with a child psychologist friend who noted that 'whatever was going on with the children it was essentially real, as ecstasy among children could never be faked,'" he said. "From then, I found that Our Lady's apparitions, beginning with Gregory Thaumaturgus in the 3rd century through to Zeitoun in Cairo in 1968 and indeed the present day, deeply compelling."
Ashenden's friendship with Abbé Rene Laurentin, expert on the Marian apparitions, blossomed into a deep dependence on the Rosary.

"Curiously, this was accompanied by an unwanted visitation of metaphysical evil which only the Rosary seemed to overcome," he observed.
The second factor leading to Ashenden's conversion was his discovery of the phenomena of eucharistic miracles.
"The fact that they were unknown amongst those who celebrated the Anglican version of the Eucharist carries obvious implications," he noted. "It is of the greatest relief to belong to the Church where the Mass is truly the Mass."
"Faces with the increasingly lethal assault on the Faith in our day, I found there was no means to draw orthodox Anglicans together in ecclesial unity and so the third reason for my conversion is the Magisterium," Ashenden remarked.
"You can find a different Anglicanism for each day of the week — almost each hour of the day," he said. "I came to realize that only the Catholic Church, with the weight of the Magisterium, had the ecclesial integrity, theological maturity and spiritual potency to defend the Faith, renew society and save souls in the fullness of faith."
Ashenden also shared with Church Militant his deep conviction that the Catholic Church is the only alternative to the tyranny of cultural marxism.