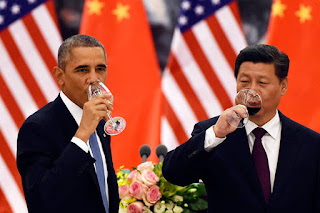 China Proves It: Obama was Really a Sap


Remember when President Barack Obama was running around telling everyone how he’d convinced China to get serious about cutting its carbon dioxide emissions? A new report shows that Obama was easily duped.
Over the course of three years, Obama met with Chinese President Xi Jinping to, he said, agree to “climate targets” (in 2014), “lay out additional actions” (in 2015), and sign the Paris Agreement (2016).
In typical Obama understatement, he declared that “we may see this as the moment that we finally decided to save our planet.”
Of course, anyone who looked at what China was promising could see that it was a sucker’s bet. China said only that it would try to “stabilize” CO2 emissions by 2030, while the rest of the industrialized world dumped money and resources into “decarbonizing” their economies.
Worse, even before Obama made his boast it was clear that China’s state-controlled emissions data were unreliable. In late 2015 it came to light that the country had far more coal plants that it had admitted, and as a result had been emitting a billion tons more CO2 that it officially proclaimed.  A report in Skeptical Science last year notes that CO2 emissions for China still “aren’t known with any accuracy.”
In other words, while Obama wanted the U.S. to actually cut emissions, neither he nor anyone else in the industrialized world knew what China was up to, other than what it claimed.
Now a new study shows that while China was telling Obama that it was taking bold steps on climate change, it was business as usual inside the Middle Kingdom.
In the past two years, China increased its energy production from coal by nearly 43 gigawatts, more than offsetting the decline in coal production in the rest of the world, Global Energy Monitor found. Just the coal plants now under construction in China and the ones that could be revived at any time would produce the same energy as the entire coal-generating capacity of the European Union.
“China’s recent growth is due to a brief but massive spree of project permitting that occurred from September 2014 to March 2016,” the Global Energy Monitor report found. Not that those years just happen to coincide with when Xi was promising Obama that it was serious about global warming.
China is also, the report says, busy financing coal plants in countries such as South Africa, Pakistan and Bangladesh.
“The continued growth of China’s coal fleet and consideration of plans to significantly raise the nation’s coal power cap show that while the country is often hailed as a clean energy leader, the momentum of coal power expansion has yet to be halted,” the report says.
Who could have possibly imagined that communist China wasn’t being sincere? Not Obama, obviously. But nor did anyone else baying for the Paris Agreement.
We’ve been pointing out in this space all along that the climate change alarmists are more interested in taking control of every aspect of our lives than they are preventing slight planetary warming. China was clearly trying to dupe a naïve Obama into squandering massive sums on expensive and unreliable “clean” energy while it busied itself building cheap “dirty” sources for itself.
Thankfully, President Donald Trump pulled out of the Paris Agreement farce first chance he got.
In our view, the entire “clean energy” campaign is a waste of time and money. If climate change does happen, we can easily adapt to the changes. Even without advanced technology, humans have learned how to survive and thrive in the most inhospitable climates that already exist on earth.
And if the horror stories peddled by climate scientists and the environmentalists and the Greta Thunburgs of the world don’t come to pass – which is far more likely – we won’t have wasted trillions of dollars and impoverished millions in an attempt to “decarbonize” the economy.