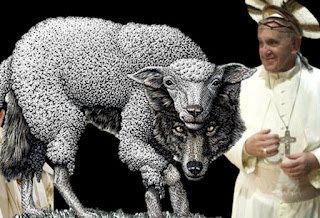 In his recent conversation with the directors of the European journals of the Society of Jesus, transcribed and published by “La Civiltà Cattolica,” Pope Francis also had his say on the “synodal path” underway in Germany. In his view, “the problem arises when the synodal path comes from the intellectual, theological elites, and is highly influenced by external pressures,” when instead it should be done “with the faithful, with the people.”

The trouble is that when this happens, that is, when suggestions are taken from the base or the opinion of the faithful is surveyed, the results are practically the same as those dictated by the dominant elites or by external pressures, with the inevitable litany of requests that range from married priests to women priests, from the new sexual and homosexual morality to the democratization of Church governance.

Francis expressed his fears about the synod of Germany in a letter of June 2019 that he “wrote all on his own, in Spanish.” But then he let it go on without putting any restraint on it and without giving any sign of listening even to the growing cries of alarm from Cardinal Walter Kasper, who at the beginning of his pontificate was his reform theologian of reference but who doubts that the German synod - an “attempt at a coup d'état” - is even “truly Catholic.”

Not only that. There is an ever more palpable risk that the agenda of Germany’s “synodal path” will end up in that other synod of the universal Church which the pope convened in 2021, having it begin from none other than the peripheries and the base, and which will have its culminating session in Rome in October of 2023.

Initially, the convocation of this general synod did not even make the news. The theme that Francis had assigned it, “synodality,” appeared so abstract and boring as to discourage any interest on the part of the media.

But then, as soon as the dioceses began to assess the state of mind of priests and faithful, it was clear right away what ingredients had gone into making the litany of requests. With the result that now the episcopal conferences, in taking stock of the decentralized first phase of the synod, find in their hands a duplicate of Germany’s “synodal path,” invoked by their faithful as well.

France is a case in point. In mid-June the French episcopal conference met in a special session precisely in order to put the finishing touch to a “Collecte des synthèses sinodales” produced in the various dioceses and then send it to Rome. In voting on the document the episcopal conference did not approve its contents, but limited itself to verifying that these were in keeping with the requests of the thousands of priests and faithful interviewed. But the requests sent to Rome include precisely the obsoletion of clerical celibacy, the ordination of women to the diaconate and the presbyterate or at least, “as a first step,” entrusting them with the homily at Mass, a radical reform of the liturgy and of its “now unacceptable” language, the generalized admission to the sacraments of the divorced and remarried and homosexual couples.

In Ireland it is the same. In addition to the reports of the consultations in each diocese the bishops also made use of a large opinion poll among the faithful. And it emerged that almost the totality of Irish Catholics want married priests and women priests, 85 percent want the obsoletion of any condemnation of homosexual acts, 70 percent want the laity as well to have decision-making power in the Church, and still others want expelled from Mass the Old Testament readings “dripping with blood.”

The meeting of the Irish episcopal conference held in mid-June was also attended by Sister Nathalie Becquart, undersecretary in Rome of the synod on synodality, who said that in two thousand years of history this is the first time the Church has brought to life such a universal consultation, which Francis wanted to start from the base. Nobody knows where this synod will end up, she concluded, but precisely for this reason one must be open to the “surprises of the Holy Spirit.”

Sister Becquart, who in the synod will have the right to vote on a par with the bishops, is part of the markedly progressive trio that Francis has placed at the head of the synod on synodality, together with the secretary general, Maltese cardinal Mario Grech, and the relator general, Luxembourgish and Jesuit cardinal Jean-Claude Hollerich.

And as if that were not enough, with both of these cardinals Francis has set up a working group on how to reconcile the German synod with that of the universal Church. The news was announced last February 3 by the president of the German episcopal conference, Limburg bishop Georg Bätzing, whose revolutionary cravings are even more intense than the already reckless ones of Hollerich himself, to the point of recently saying that he is “disappointed” by the pope’s slow pace.

It was in vain that not a few bishops and cardinals knocked at the door of the dicastery for the doctrine of the faith, asking that Cardinal Hollerich’s most brazen theses be disavowed, especially those that overturn the doctrine on sexuality and homosexuality. The dicastery is keeping quiet and everyone is convinced that it is the pope who is imposing the gag.

Among the new cardinals announced by Francis on Ascension Sunday are at least a couple who are champions of this doctrinal revolution: San Diego bishop Robert McElroy and Manaus archbishop Leonardo Ulrich Steiner.

The effect of the practical pass granted by the pope to the German “synodal path” is that there are more and more in the Church who feel authorized to behave accordingly.

In Germany there was a stir over the three hundred Franciscan friars who in mid-June elected as their provincial superior Markus Fuhrmann, who had made the news a few weeks earlier by publicly stating he was a homosexual as well as a fervent supporter of the most brazen innovations in the works with the “synodal path” in Germany.

And a few days later, again in Germany, for the umpteenth time there came demands for the same innovations - including the blessing of homosexual unions in church, banned only in words by the Vatican - from the head man of the German hierarchy, Cardinal Reinhard Marx, archbishop of Munich and a prominent member of the small council of cardinals created by the pope to assist him in governing the universal Church.

In Switzerland, in the diocese of Chur, Bishop Joseph Maria Bonnemain has forced the priests and diocesan employees to sign a rainbow code in which among other things they pledge to “renounce generally negative evaluations on alleged non-biblical behavior in matters of sexual orientation.

In Italy, in the archdiocese of Bologna, on June 11 a male couple civilly united at city hall and immediately afterward celebrated their union in church, at a Mass officiated by the head of family pastoral care for the archdiocese, Don Gabriele Davalli. A subsequent contorted statement from the archdiocese attempted to justify the incident, maintaining that it was simply - against the evidence - a Mass of thanksgiving for the Catholic LGBT group “In cammino,” to which the two belong. But no one missed the fact that the archbishop of Bologna is Cardinal Matteo Zuppi, who for a month has been president, by papal appointment, of the Italian episcopal conference and is also the first in the ranking of candidates for a future conclave. It is likely that this episode will damage his bid to succeed Francis, costing him the few votes he could collect among conservative cardinals as well.

In short, the contagion of Germany’s “synodal path,” unchecked by the pope, has now crossed the borders and threatens to influence the general synod on synodality itself. Nor did anything at all come of the heartfelt open letter sent to the German bishops on April 11 by cardinals Francis Arinze, Raymond Burke, Wilfried Napier, George Pell, Camillo Ruini, Joseph Zen, and about a hundred archbishops and bishops from around the world.

That the Catholic Church may be turned into a sort of permanent synod, with the requests from the base, meaning the dominant culture, playing the master, is another of the dangers denounced by Cardinal Kasper.

In any case, in the judgment of another cardinal, the Italian Camillo Ruini, a substantial part of the Church has already crossed the boundaries of Catholic doctrine on at least one point: the approval of homosexual acts. “I do not deny that there is a risk of schism,” he said in a May 4 interview with “Il Foglio.” “But I trust that, with God’s help, it can be overcome.”