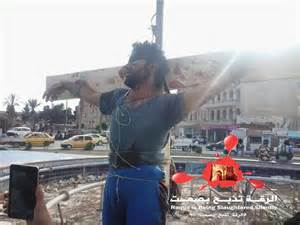 
Twelve Christians have been brutally executed by the Islamic State, including the 12-year-old son of a Syrian ministry team leader who had planted nine churches, because they refused to renounce the name of Jesus Christ and embrace Islam. The martyrs were faithful to the very end; right before one woman was beheaded by the terror group, she appeared to be smiling slightly as she said, "Jesus!"


According to Christian Aid Mission, a humanitarian group which assists indigenous Christian workers in their native countries, the horrific murders took place on August 28 in an unnamed village outside Aleppo, Syria.
"In front of the team leader and relatives in the crowd, the Islamic extremists cut off the fingertips of the boy and severely beat him, telling his father they would stop the torture only if he, the father, returned to Islam," Christian Aid revealed, according to a report from Morning Star News. "When the team leader refused, relatives said, the ISIS militants also tortured and beat him and the two other ministry workers. The three men and the boy then met their deaths in crucifixion."
They were killed for refusing to return to Islam after embracing Christianity, as were the other eight aid workers, including two women, according to Christian Aid. The eight were taken to a separate site in the village and asked if they would return to Islam. However, after they refused to renounce Christ, the women, ages 29 and 33, were raped before the crowd summoned to watch, and then all eight were beheaded.
They prayed as they knelt before the Islamic State militants, according to the ministry leader Christian Aid assists, who spoke with relatives and villagers while visiting the site.
"Villagers said some were praying in the name of Jesus, others said some were praying the Lord's Prayer, and others said some of them lifted their heads to commend their spirits to Jesus," the ministry director told Christian Aid. "One of the women looked up and seemed to be almost smiling as she said, 'Jesus!'"
In a manner reflective of Christ's crucifixion, the bodies of those killed were then hung on crosses for display.
The twelve martyrs are among thousands of Christians who have been ransomed, tortured, beheaded and killed over the past year by the Islamic State, a hardline Muslim group determined to wipe Christianity off the Middle Eastern map.


The jihadist group has also destroyed countless time-honored Christian monasteries, manuscripts, and holy sites in an attempt to eradicate the faith.
In Syria alone, the Christian population has plunged by nearly two-thirds since the country's civil war started in 2011. In Iraq, the Christian population is teetering on extinction, dwindling from around 1.5 million in 2003 to well below 200,000 now.

"It is like going back 1,000 years seeing the barbarity that Christians are having to live under. I think we are dealing with a group which makes Nazism pale in comparison and I think they have lost all respect for human life," Patrick Sookhdeo, founder of Barnabas Fund, a charity which seeks to help Syrian Christians, told the Daily Express.


"Crucifying these people is sending a message and they are using forms of killing which they believe have been sanctioned by Sharia law," he added. "For them what they are doing is perfectly normal and they don't see a problem with it. It is that religious justification which is so appalling."
In Defense of Christians, a persecution watchdog group, earlier this month lobbied on Capitol Hill for lawmakers to pass a resolution characterizing ISIS's targeting of the Christian minority as "genocide."