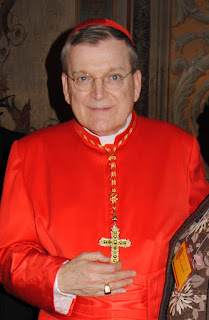 "The exclusion of those in irregular matrimonial unions from the Sacraments does not constitute a judgment about their responsibility for the breakdown of the matrimonial bond to which they are bound.  It is rather the objective recognition of the bond".

"The entire document requires a careful study, in order to understand exactly what counsel it is offering to the Roman Pontiff, in accord with the nature of the Synod of Bishops, “in the preservation and growth of faith and morals and in the observance and strengthening of ecclesiastical discipline” (can. 342). The section entitled “Discernment and Integration” (paragraphs 84-86) is, however, of immediate concern, because of its lack of clarity in a fundamental matter of the faith: the indissolubility of the marriage bond which both reason and faith teach all men.

First of all, the term, integration, is a mundane term which is theologically ambiguous. I do not see how it can be “the key of pastoral accompaniment of those in irregular matrimonial unions.” The interpretative key of their pastoral care must be the communion founded on the truth of marriage in Christ which must be honored and practiced, even if one of parties of the marriage has been abandoned through the sin of the other party.

The grace of the Sacrament of Holy Matrimony strengthens the abandoned spouse to live faithfully the marriage bond, continuing to seek the salvation of the partner who has abandoned the marriage union. I have known, since my childhood, and continue to meet faithful Catholics whose marriages have, in some way, been broken, but who, believing in the grace of the Sacrament, continue to live in fidelity to their marriage. They look to the Church for that accompaniment which helps them to remain faithful to the truth of Christ in their lives.

Second, the quotation from no. 84 of Familaris Consortio is misleading. At the time of the 1980 Synod of Bishops on the Family, as throughout the history of the Church, there has always been pressure to admit divorce because of the painful situations of those in irregular unions, that is, those whose lives are not in accord with the truth of Christ on marriage, as He clearly announced it in the Gospels (Mt 19, 3-12; Mk 10, 2-12). While, in no. 84, Pope Saint John Paul II acknowledges the different situations of those who are living in an irregular union and urges pastors and the whole community to help them as true brothers and sisters in Christ by virtue of Baptism, he concludes:

“However, the Church reaffirms her practice, which is based upon Sacred Scripture, of not admitting to Eucharistic Communion divorced persons who have remarried.” He then recalls the reason for the practice: “the fact that their state and condition of life objectively contradict that union of love between Christ and the Church which is signified and effected by the Eucharist.” He also rightly notes that a different practice would lead the faithful “into error and confusion regarding the Church’s teaching about the indissolubility of marriage.”

Thirdly, the citation of the Catechism of the Catholic Church (no. 1735) regarding imputability must be interpreted in terms of the freedom “which makes man responsible for his acts to the extent that they are voluntary” (CCC, no. 1734). The exclusion of those in irregular matrimonial unions from the Sacraments does not constitute a judgment about their responsibility for the breakdown of the matrimonial bond to which they are bound. It is rather the objective recognition of the bond.

The Declaration of the Pontifical Council for Legislative Texts of June 24, 2000, which is also cited is in complete accord with the constant teaching and practice of the Church in the matter, citing no. 84 of Familiaris Consortio. That Declaration also makes clear the finality of the conversation with a priest in the internal forum, that is, in the words of Pope Saint John Paul II, “a way of life that is no longer in contradiction to the indissolubility of marriage” (Familiaris Consortio, no. 84). The Church’s discipline provides ongoing pastoral assistance for those in irregular unions who “for serious reasons such as for example the children’s upbringing, …cannot satisfy the obligation to separate,” so that they may live chastely in fidelity to the truth of Christ (Familiaris Consortio, no. 84).”

Cardinal Pell on the Synod, the Final Report, and Decentralization

By Edward Petin 10/26/2015
Cardinal George Pell, prefect of the Vatican Secretariat for the Economy, sat down with the Register Oct. 25 to share his reflections on the Synod on the Family.
In this characteristically frank interview, he discussed the quality of the final report, criticisms over ambiguous language in the passage relating to divorce and remarriage, the influence of the Pope's 45 personally appointed delegates, and what the Holy Father's recent comments on synodality and decentralization might mean for the Church.

Your Eminence, what was your overall assessment of the synod?
I’ve been to seven synods, I think this was certainly the most interesting and also was very hard work. I think the final document is immensely better than the instrumentum laboris, in every way. It’s elegantly written, it’s more clearly structured, the level of argumentation is not embarrassingly low, and it’s a consensus document. There was massive consensus on 92 of the 94 paragraphs and there is nothing in the set of paragraphs that is heretical or opposed to current Church practice.

Paragraphs 84-86 on divorce and remarriage only just got enough votes and have drawn criticism for being ambiguous. Is this a problem?
No it’s not ambiguous, it’s insufficient. There’s really no ambiguity in the text. If you closely examine the text in 85, it’s very clear. The basis for all the discernment must be the “insegnamento complessivo”* – complete teaching – of John Paul II. Then it goes on to repeat that the basis of discernment is the teaching of the Church.

A lot of the fathers would have liked it spelled out a bit more explicitly but there is no mention anywhere of Communion for the divorced and remarried. It’s not one of the possibilities that was floated. The document is cleverly written to get consensus. Some people would say it’s insufficient. It’s not ambiguous.

---
EXPLICAÇÃO DO JORNAL:  * the text actually says "criterio complessivo" - overal criteria. As a reader pointed out: this is "extremely important since no. 85 passed by one vote. If Pell got it wrong, others did also. It shouldn't have passed." Checking with Cardinal Pell's office and will update soon.
----

The headlines in some Italian newspapers, and an Irish website, implied the Church was now allowing all remarried divorcees to receive Holy Communion on a case-by-case basis. What’s your view of this?

That is completely unjustified. There is nothing in the document to justify that, and the Polish bishops came out today I believe to say very explicitly that such an understanding is not justified by the text. Now you might like the text or dislike it. You might think it’s good, bad or indifferent, but at least let us read it accurately and justly, and judge it on its own terms. So those headlines are inaccurate and misleading. They’ve probably been fed a line. I’m not sure there was or is an official English text so there’s some excuse for them misunderstanding it, but such headlines are not justified. People should go to those paragraphs and judge for themselves.

Some were critical that Familiaris consortio was cherry picked, and its clear position on not admitting remarried divorcees omitted, thereby diminishing the integrity of the apostolic letter. How do you respond to that?
Well the full text is not quoted, but they did add the word “complessivo” – it’s the entire teaching of John Paul II which is the basis, not the incomplete citation that was given.

At last year’s synod, there was manipulation and clearly an agenda being pushed. Are you more content with what has happened at this year’s meeting?
Yes, we voted paragraph by paragraph and, in most ways, the document did represent what was discussed in the groups whereas the interim relatio last time bore little relationship with the discussion in most groups. The Holy Father said there would be no manipulation and so we were substantially reassured on that.

You had this year 45 papal-appointed delegates who appeared to swing the vote. It’s said those controversial paragraphs on divorce and remarriage probably wouldn’t have passed without those papal appointees.
That’s very possible.

Do you think that’s a problem?
It’s a fact.

Regarding the Pope’s speech last Saturday on synodality, what is your opinion of that and his comments about decentralization? How will that proceed?
The two terms [synodality and decentralizations] are not really compatible because the Synod of Bishops has got people coming from the peripheries, near and far, to the center, and that’s a wonderful example of Catholic life. Catholicos, a Greek word, means universal, it doesn’t mean continental or regional. Synodality – I’m not quite sure what it means when it’s applied to the whole of Church life as distinct from the existence of a synod like this. But these things are to be the activities that are to continue to flow along. There are questions to be resolved and explained, and to get beyond the title or the affirmation and work out just what it means. The Catholic Church has been going for 2,000 years so there are established patterns and they don’t work too badly. That’s not to say we couldn’t improve.

Are you concerned that the Anglican model might creep in, weakening Church authority?
No because we’ve got the papacy and we’ve got a Holy Father who’s quite capable of making decisions for himself.
***