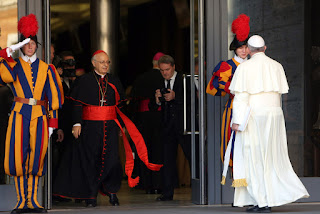 By Francis X. Rocca in Vatican City and Tamara Audi in Los Angeles

Newly released documents show Catholic bishops are unlikely to back Pope Francis’ drive to let church members who have divorced and remarried receive Communion, threatening to set back one of the pope’s signature initiatives.

Position papers prepared during a high-profile meeting on family issues indicate conservative opposition to the move remains strong. Without the support of the gathering, known as a synod, the pope faces the unpalatable choice of watching a major meeting he has promoted come to an inconclusive end, or acting unilaterally and potentially dividing the church.

“You can’t separate practice from moral teaching,” Cardinal George Pell, the Vatican’s finance chief and a leader of conservatives at the synod, said in an interview last Friday. “Christ’s teaching on adultery and second marriages is very clear.”

A proposal for a change in rules on Communion has become the centerpiece of the pope’s push for a more conciliatory approach to Catholics at odds with church teaching on family issues, including remarried divorcées and people in same-sex relationships.

“The church says, ‘Be faithful to your dream’ ” of lifelong fidelity in marriage, said Cardinal Reinhard Marx of Munich, a leader of the synod liberals, at a news conference Wednesday. “But when you fail, we stay with you, we stay together, you belong to us.”

Last year, the pope convened a two-part meeting of bishops from around the world to discuss family issues, with particular attention to divorce. The final half has been under way this month in Rome and draws to a close Saturday.

After more than two weeks of debate, position papers released Wednesday showed insufficient support among the bishops for liberalizing church law on Communion for divorced and civilly remarried Catholics.

None of the 13 small groups into which the more than 250 bishops had divided for discussion called categorically for allowing such Catholics to receive Communion. Some groups either advised against doing so or failed to reach a conclusion; others called for further study of the matter by the pope, bishops or a body of experts.

Under church law, such Catholics may not receive Communion without an annulment of their first, sacramental marriage, unless they abstain from sexual relations in the second, civil union. Otherwise, the church considers them adulterers.

Conservatives argue that any change would effectively sanction extramarital sex, opening the door to acceptance of cohabitation and homosexual acts.