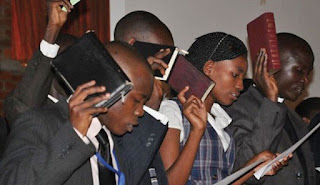 October 15, 2015 By Our East Africa Correspondent
NAIROBI, Kenya (Morning Star News) – Islamists upset by a Christian-Muslim debate are suspected in the killing of a long-time evangelist in eastern Uganda who led many Muslims to Christ, sources said.

The mutilated body of Samson Nfunyeku was found close to his home in Kalampete village, Kibuku District early on Sept. 23, after the latest in a series of organized debates with Islamic scholars at Tirinyi Trading Center ended prematurely due to flaring tempers the previous night. He was 59.

At a previous debate, also sponsored by Nfunyeku’s Church of Uganda and other churches, Muslim leaders had threatened him and warned him to hold no more debates, a source said.

“Four months ago Samson and others had a very hot debate at Tirinyi Trading Center with the Muslim scholars that ended on a bad note, and they gave warning that such debates were not good for the Muslims,” said one of the participants, a former sheikh (Islamic teacher) who became a Christian.

Nevertheless, another debate was held on Sept. 22 with few in attendance, said the source, whose name is withheld for security purposes. The debate ended at about 5:30 p.m., and as the trading center is about seven kilometers (four miles) from Kalampete, colleagues estimated Nfunyeku was killed between 7:30 p.m. and 8 p.m.

He had head injuries and a mark on his neck indicating he was strangled, they said.

Nfunyeku was a lay leader who boldly proclaimed Christ in house-to-house visits and at evangelistic events for more than 30 years. Loved ones showed strong emotion at his burial on Sept. 25 in Kalampete, sources said.

“We are going to miss the courage and passion seen in the life of Samson, who was out to win Muslims for Christ,” Gauma Samuel of the Church of Uganda’s Budaka Archdeaconry said at his funeral service.

Nfunyeku is survived by seven children and 16 grandchildren.

“They need prayers in this moment of mourning,” a source said.

Converts from Islam to Christianity in eastern Uganda have recently experienced regular instances of persecution. A Muslim in Nsinze village, Namutumba District beat and left for dead his wife and 18-year-old son on Aug. 11 after learning they had converted to Christianity, area sources said.

Issa Kasoono beat and strangled his wife, Jafalan Kadondi, but she survived, said a source who requested anonymity. He said other relatives joined Kasoono in beating her and their two sons, Ibrahim Kasoono, 18, and Ismael Feruza, 16, though the younger son managed to escape with only bruises on his arm.

The wife of a former sheikh was poisoned to death on June 17 after she and her husband put their faith in Christ in Nabuli village, Kibuku District. Namumbeiza Swabura was the mother of 11 children, including a 5-month-old baby.

In Kiryolo, Kaderuna Sub-County, Budaka District on March 28, five Muslims gang-raped the 17-year-old daughter of a pastor because the church leader ignored their warnings that he stop worship services, she said.

About 85 percent of the people in Uganda are Christian and 11 percent Muslim, with some eastern areas having large Muslim populations. The country’s constitution and other laws provide for religious freedom, including the right to propagate one’s faith and convert from one faith to another.


CHECK DOWN:
‘Just call me Jorge’
José María del Corral, director of the ‘School of Neighbors’ educational program in Buenos Aires was one of the Pope’s special guests at his Inaugural Mass.
In passing, let me stress that this school, an initiative supported by Card. Bergoglio, is not to catechize the youth in the Catholic Faith. Rather, it brings together young people of different religions to teach them tolerance and “respect” for their differences. In effect, it promotes religious indifference.
Jose Maria del Corral
Corral telling his story in St. Peter's Square
When Corral “bumped into” the Pope in the elevator, he asked, “How should I refer to you now?”
The Pope answered, “Call me Jorge, what else?”
This egalitarian gesture brought tears of joy to Corral’s eyes. I think it should bring tears of sorrow to the eyes of Catholics who love and revere the See of Peter and all that it represents.:
http://traditioninaction.org/religious/d025_Jorge.htm