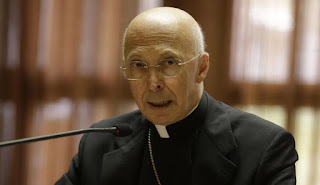 “Why, we ask the western world, why not raise one’s voice over so much ferocity and injustice?” asked Cardinal Angelo Bagnasco, the head of the Italian Bishops Conference (CEI).
The Melkite Greek Catholic Patriarch Gregory III has also said: “I do not understand why the world does not raise its voice against such acts of brutality.”
Here is why: “Talk about extreme, militant Islamists and the atrocities that they have perpetrated globally might undercut the positive achievements that we Catholics have attained in our inter-religious dialogue with devout Muslims.” — Robert McManus, Roman Catholic Bishop of Worcester, Massachusetts, February 8, 2013
That’s right, it’s all for the sake of the spurious and self-defeating “dialogue.” Bagnasco should ask his colleagues in the U.S. Conference of Catholic Bishops. He should ask bishops like McManus, Kevin Farrell, Jaime Soto and others why they move actively to silence and demonize voices that tell the truth about this persecution. He should ask them why they tolerated dissent from so many core Catholic dogmas for decades, but move as ruthlessly as any Grand Inquisitor to suppress dissent from the idea that Islam is a Religion of Peace, which isn’t even a dogma of the Church. He should ask them why they are abandoning their Middle Eastern brethren and keeping their own people ignorant and complacent about the jihad threat.
The U.S. Conference of Catholic Bishops is desperately corrupt and compromised, and needs a thorough housecleaning. But no such thing is on the horizon.
“West silent on ‘cull’ of Christians – Italian bishops’ head,” ANSA, September 30, 2015 (thanks to Insubria):

(ANSA) – Vatican City, September 30 – “The cull of Christians continues” in the Middle East and Africa where it “seems somebody has decided to uproot them to cleanse the territory,” Italian Bishops Conference (CEI) head Cardinal Angelo Bagnasco said Wednesday.
“Why, we ask the western world, why not raise one’s voice over so much ferocity and injustice?” Bagnasco asked opening a CEI Council meeting in Florence.