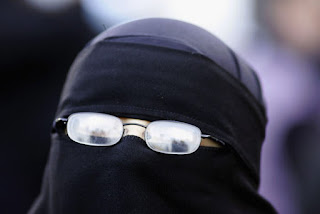 Muslim foster carers 'told Christian girl, five, that Christmas and Easter are stupid and European women are alcoholics after taking away her crucifix and stopping her from eating bacon'

A white five-year-old girl told her mother Christmas and Easter are 'stupid' and European women are alcoholics after being fostered to two Muslim families, it was claimed today.

The child, who is a native English speaker, also refused to take back her favourite meal - spaghetti carbonara - because it contained bacon - which Muslims do not eat.

The child, who is a native English speaker, spent the past six months in two Muslim households after being placed into foster care in Tower Hamlets, east London.

She was forced to live in Muslim foster homes where nobody spoke English and her carers took away her Christian cross and encouraged her to learn Arabic, according to The Times.

Local authority reports describe how the little girl sobbed and begged not to be returned to her niqab-wearing carer’s home, telling a social worker: ‘They don’t speak English.’
The reports detail how the child was ‘very distressed’ and claimed the foster carer had removed her Christian cross and encouraged her to learn Arabic.

The two placements were made by the scandal-hit Tower Hamlets borough council against the wishes of the girl’s family.

Local authorities are required to give due consideration to a child’s religion, racial origin and cultural and linguistic background’ when placing them into a foster home.

The girl’s mother is said to be horrified by the circumstances her daughter has been placed in.
A friend told the newspaper: ‘This is a five-year-old white girl. She was born in this country, speaks English as her first language, loves football, holds a British passport and was christened in a church.

‘She’s already suffered the huge trauma of being forcibly separated from her family. She needs surroundings in which she’ll feel secure. Instead, she’s trapped in a world where everything feels foreign and unfamiliar. That’s really scary for a young child.’

The girl lived with her first carer, who is believed to have worn a niqab outside the family home, for four months. Her current carer wears a burka, which covers her face entirely, when she is out in public with the child.

In April this year, an Ofsted inspection at Tower Hamlets council found ‘widespread and serious failures in the services provided to children who need help and protection’.

The council’s children’s service was rated as inadequate and found to have an ‘entrenched culture of non-compliance with basic social work standards’.

The Department for Education said: ‘When placing a child in a foster home, the local authority must ensure that the placement is the most appropriate way to support [the child’s] welfare. A child’s background is an important consideration in this decision.’

A council spokesman said: ‘We are unable to comment on individual cases. In every case, we give absolute consideration to our children’s background and to their cultural identity. All our foster carers receive training to ensure they are fully qualified to meet the needs of children in their care.’

It’s not the first time Tower Hamlets has been embroiled in scandal. In 2014, a leaked government report suggested the mayor Lutfur Rahman had links to Islamic extremist groups, including one seeking to set up a Sharia state in Europe.

In 2011, it was reported a 31-year-old Asian woman who worked in a local chemist’s had received death threats for refusing to wear a veil, even though she was not a practising Muslim.