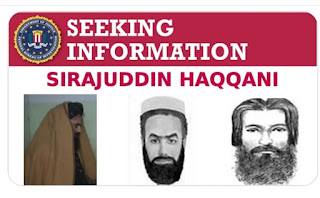 The Taliban announced “the formation of a hardline interim government for Afghanistan” on Tuesday, per CNN, and among the top ministers is the FBI-wanted alleged terror leader Sirajuddin Haqqani, the head of the Taliban- and al Qaeda-aligned Haqqani network and a State Department “specially designated global terrorist.”

“Mullah Mohammad Hassan Akhund, a long-time Taliban member who has been [the] leader of the group’s Shura or Leadership Council for about two decades, was named as prime minister. He is seen as an influential and respected on the religious side of the movement, rather than on its military side,” CNN reported. Not a single female leader was among those appointed, despite the Taliban’s reported newfound commitment to women’s rights.

Sirajuddin Haqqani is the Haqqani Network’s leader, CNN noted, and he is joined by his uncle, Khalil Haqqani, who was appointed “acting minister of refugees,” though it is not clear whether that refers to incoming or outgoing Afghans.

Sirajuddin Haqqani is wanted by both the FBI and the United States State Department, and he has a $5 million bounty from the U.S. State Department on his head, according to the FBI’s “Most Wanted” page,  which still lists his whereabouts as largely unknown.

"The Rewards For Justice Program, United States Department of State, is offering a reward of up to $5 million for information leading directly to the arrest of Sirajuddin Haqqani,” the site reads. “Haqqani is thought to stay in Pakistan, specifically the Miram Shah, North Waziristan, Pakistan, area. He is reportedly a senior leader of the Haqqani network and maintains close ties to the Taliban and al Qaeda. Haqqani is a specially designated global terrorist.”

“Sirajuddin Haqqani is wanted for questioning in connection with the January 2008 attack on a hotel in Kabul, Afghanistan, that killed six people, including an American citizen. He is believed to have coordinated and participated in cross-border attacks against United States and coalition forces in Afghanistan. Haqqani also allegedly was involved in the planning of the assassination attempt on Afghan President Hamid Karzai in 2008,” the FBI noted.

The Wall Street Journal reported in late August that the Haqqani Network, which is connected to al Qaeda and has been a U.S.-designated terror network since 2012, has risen to prominence inside Afghanistan.

"Experts who have followed the group for years worry that its consolidation of power will enable the kind of transnational terrorism that the U.S.-led invasion of 2001 aimed to eradicate,” The Wall Street Journal noted. “The network’s de facto leader, Sirajuddin Haqqani, son of Jalaluddin, worked closely with Osama bin Laden’s top lieutenant and al Qaeda fighters in Afghanistan, according to files recovered in bin Laden’s compound in Pakistan. Today, Sirajuddin is the Taliban’s military chief, and his forces have been put in charge of security in Kabul.”