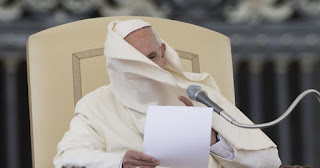 It is a mistake for the Church to try to hold onto old traditions or to have clear answers for everything, Pope Francis said Thursday.

Jesus intentionally omitted telling his disciples many things so that the Church would learn to renounce the desire for clarity and order, the pope told participants in the 21st general assembly of Caritas Internationalis, the Church’s global charitable outreach.
When pagans first embraced the Christian faith, the question arose as to if they would have to abide by all the precepts of the Jewish law, something Jesus never spoke of, the pope noted.
By not always giving “clear rules” that would quickly resolve issues, Jesus was protecting the Church from the temptation of “efficientism,” Francis said, which is the desire for the Church to have everything under control, avoiding surprises, with its agenda always in order.
This is not the way the Lord acts, he continued. He does not send answers from heaven. “He sends the Holy Spirit.”
“Jesus does not want the church to be a perfect model, satisfied with its own organization and able to defend its good name,” he said. “Jesus did not live like this, but on a journey, without fearing the upheavals of life.”
Living like Jesus demands the “courage of renunciation,” the pontiff said, a willingness to abandon traditions that are dear to us.
Changing and adapting is not about imposing something new, he said, “but leaving aside something old.”
Those early Christians had to learn to leave behind “important religious traditions and precepts, dear to the chosen people,” he said, by which their very “religious identity” was at stake.
In the end, they did not need a bunch of doctrines and traditions. but the simple announcement that “God is love,” Francis said, and in the face of this great truth, “even convictions and human traditions can and must be abandoned, since they are more of an obstacle than a help.”
“God often purifies, simplifies, and makes us grow by taking away, not by adding, as we might do,” he said.
“True faith cleanses from attachments,” he said. “As a church, we are not called to corporate compromises, but to evangelical enterprise.”
Critics of the pope have often complained that he intentionally sows “ambiguity,” and the pontiff’s words Thursday would seem to suggest that he owns this criticism as a badge of honor because he sees a desire for doctrinal clarity as anti-evangelical.
Francis famously refused to answer four cardinals who presented him with five questions or “dubia” to clarify certain purportedly unclear teachings in his 2016 teaching letter, Amoris Laetitia (The Joy of Love).
In 2017, the former doctrinal chief of the U.S. Bishops Conference (USCCB) wrote a powerful letter to the pope, criticizing his “intentionally ambiguous” teaching, derision of conservatives, and resistance to constructive criticism.
The Capuchin priest, Father Thomas Weinandy, whom Pope Francis himself named to the Vatican’s International Theological Commission in 2014, listed five points that illustrate the “chronic confusion” that seems to characterize the Francis pontificate, namely, intentional ambiguity, disdain for doctrine, the naming of heterodox bishops, sowing division in the Church, and vindictiveness in the face of criticism.
The Pope’s guidance “at times seems intentionally ambiguous,” the theologian stated, leaving the faithful confused and spiritually adrift. “To teach with such a seemingly intentional lack of clarity inevitably risks sinning against the Holy Spirit, the Spirit of truth,” the priest said.
While the pope accuses his critics of making doctrine into an ideology, “it is precisely Christian doctrine that frees people from worldly ideologies and assures that they are actually preaching and teaching the authentic, life-giving Gospel,” Weinandy said.
Other observers have attributed the Pope’s habitual vagueness to his training in the Jesuit order.
“For those unfamiliar with Jesuits,” wrote Dominic Lynch in The Federalist, “vague and porous doctrine is almost their raison d’être. Indeed, it is so baked into the order that finding a conservative Jesuit is more difficult than finding a liberal in West Texas.”