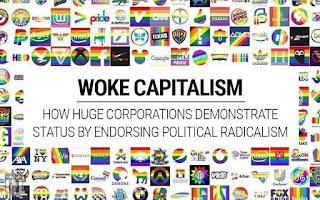 Why Corporations Are Woke

Corporations are woke because, at first, they had to be, in fear of being sued. Then, after the “solutions” to prevent monetary loss took hold, it was because they wanted to be. Now all citizens must be woke.

This story is well known on the Reality-based right; this is a handy summary of our doom for those not familiar with it.

It is true, and can be admitted, that attitudes towards blacks in some areas of the States in mid-Twentieth Century were poor and unjustified. Instead of correcting these attitudes through cultural means, the government (which includes the media and so-called non-governmental organizations) decided to correct them through law. The Constitution said freedom of assembly (association) was paramount. The government added, by force of law which they were forbidden by law to add, “free association, but not if there is wrongthink.”

Forced association happened quickly. Blacks were bused to non-black neighborhoods and made to mingle. Armed federal troops enforced these rules.

It became illegal to “discriminate” because of race (which academics to this day say doesn’t exist, except the white race, which is evil). Yet it was difficult to prove anybody made decisions, i.e. discriminated, because of race. A corporation could say “We did not hire this black man because he is unqualified” even if, in their heart of hearts, they did not want to hire this man because he was black, and even if it was true the man was unqualified.

Courts quickly moved to define “discrimination”—now a bad word—statistically. “Discrimination” against individuals no longer had to be proved. Instead, it was sufficient to show “not enough” blacks were hired. This was the real beginning of the insanity. If “discrimination” was limited to actual demonstration of individual race-based decisions, the madness could not have spread far because of the difficulty of proof.

Defining “discrimination” statistically turned the presumption of innocence into the presumption, indeed proof, of guilt. The problem is obvious: what positions are subject to “discrimination” complaints? Ambiguity in job descriptions made this messy. What denominator should be used to prove a “disparity”? The ratio of blacks to non-blacks who live in a three-block radius of the corporation? Four blocks? The county? State? Country? This year? Last? Those holding certain experience and credentials? Which?

It became almost impossible to be innocent of “discrimination” statistically. Lawsuits and their judgments were too costly to bear. So corporations, especially larger ones that could afford it, began to preemptively institute race quotas. This was the beginning of wokeness.

Race quotas must needs be tracked, and tracking requires trackers. Thus the start of corporate zampolit, a.k.a. human resources and Diversity directors.

Race was almost simultaneously expanded to sex, and other categories, but race and sex were the largest “identities” to be tracked—at first. The story of statistical “discrimination”, quotas, and empowering quota trackers is the same for sex, and later for other “identities”.

The problem became finding bodies to meet the quotas. In simple factory jobs, this was somewhat easy. In more complex positions that required experience, ability, and what we used to call education, it was not easy. Standards had to be, and were, lowered—with corporations proclaiming simultaneously standards would not be lowered, and that they weren’t really necessary anyway. Lowering standards is costly, so again only the larger corporations could absorb the cost, and (this is a pun) the smaller companies who couldn’t.

Quotas were most blatant in education. Academics are notorious snobs, so at first they could not bear direct infusions of unqualified women and non-whites into their own departments, which still had standards. So they created new departments (and sub-departments): Studies departments. Standards for placements into these departments were largely belonging to the proper race or sex.

These quotas seemed to fix statistical “discrimination”, and administrators were satisfied. But the situation quickly became a problem because these departments to be considered real had to have students. How to get them? Wokeness accelerated when taking Studies courses became mandatory. And it accelerated again when it became apparent that being awarded a Studies “degree”—“degrees” being necessary for entry into polite society—required no intelligence or ability.

The inevitable happened. Quotas expanded from the gross levels—across the corporation or university as a whole—to individual departments within the institutions. It expands still, because as long as “discrimination” is defined statistically, it will never disappear, and will forever arise everywhere, through changing definitions of numerators and denominators and “identities”.