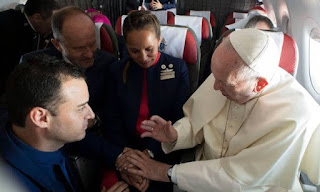 Thoughts on a mid-air marriage

January 18, 2018
Show of hands! Who wants to rain all over the sentimental paradelining up behind (what is being presented as) the pope’s facilitation of married love? Anyone? Anyone?
I thought not. Oh well.
Readers of this blog know that I am no fan of canonical form for marriage (cc. 1108, 1117)—a cure that has far outlived the malady (clandestine marriage) it was designed to treat—but canonical form is still law for Catholics and that law goes to the validity of Catholic marriage. Based on the reports offered here and here, I cannot tell whether the ‘wedding’ that the pope put together for an unsuspecting couple satisfies Church requirements on marriage, and several other laws impacting the liceity of marriage seem simply to have been disregarded in the event. As happened several times under earlier administrations, a representative from the Vatican Press Office assures us that “everything was valid”. Such assertions by canonically unqualified and unauthorized PR staff carry, of course, no weight. Real questions worthy of real answers are still raised by this event.
Before getting into details, however, let me say that I am sorry for Paula Podest and Carlos Ciuffardi, two perfectly pleasant flight attendants who paid a courtesy call on their celebrity guest and, next thing they know, their names, faces, and rather odd marriage history are being broadcast to the world. They did not ask for a wedding and were astonished when Pope Francis suggested it. This was not their idea.
Now, about the matter itself.
Popes have jurisdiction for the external forum anywhere on earth (cc. 134, 331, 1108), so Francis can officiate at a wedding anywhere, anytime.
But officiating at a wedding means something specific: it means asking for and receiving the consent of the contracting parties to marrying each each other (c. 1108) here and now. Per the Rite of Matrimony consent is sought from each party individually and must be oriented to marrying the other party at this time; the request is not posed as a joint question to the couple about beingmarried, akin to, ‘do you two want to be married?’, but rather is framed ‘doyou marry him/her?’ at this point in time. If consent (the heart of marriage per c. 1057) is not adequately asked for and received, it is not exchanged, and such a couple would not be married (and, No, ‘Ecclesia supplet’ cannot make up for a failure in what is actually sacramental—as opposed to canonical—form). The above reports mention, as far as I can see, only the pope’s broaching the topic of marriage by asking the couple whether they wanted to be married, placing their hands together, saying a few inspirational words about marriage, and pronouncing them husband and wife. But such a sequence describes, not at all, apresent exchange of consent by the parties. Let us hope, then, that in the actual event considerably more was said than has been reported.
Second, canonical form demands two independent actual witnesses to the exchange of consent, meaning that five persons must be immediately present for the wedding—not folks who heard about it a few minutes later, or who saw something happening and wondered, hey, what’s going on back there?—but five persons actingtogether and at the same time: a bride, a groom, an officiant, and two other actual witnesses. While reports are unclear as to how many people actually witnessed this event, and while this photo shows four people in the event (plus a camera man?) and four signatures on a document, another photo shows five names on the marriage document, so one may presume (c. 1541) accordingly.
Third, several canons impacting theliceity of weddings (norms on ‘liceity’ often being regarded as wink-wink rules in Church life, especially when higher-ups model the wink-winking) were apparently ignored here, including: the requirement for serious pastoral preparation prior to a wedding (c. 1063), administration of Confirmation before Matrimony (c. 1065), urging of Penance and holy Communion before a wedding (c. 1065), verification that no obstacles to validity or liceity are in place (c. 1066), securing evidence of the contractants’ freedom to marry (c. 1068) upon pain of acting illicitly without it (c. 1114), an expectation that Catholic weddings be celebrated in a parish church (cc. 1115, 1118), and making use of the Church’s treasury of liturgical books for celebration of the sacramental rite (c. 1119).
As this story reverberates ‘round the world, now, deacons, priests, and bishops who try to uphold Church norms fostering values such as deliberate marriage preparation, an ecclesial context for a Catholic wedding, and the use of established and reliable texts for expressing consent will, undoubtedly, have the Podest-Ciuffardi wedding tossed in their face as evidence that, if Pope Francis does not insist on such legalistic silliness and only cares about whether two people love one another, why shouldn’t they do likewise? The ministry of conscientious clergy in this regard just got harder.
As mentioned above, I would be happy to see the requirement of canonical form for marriage eliminated, this, for several reasons, one of which is that—long story omitted—we could actually makehigher demands of Catholics who want to marry before our clergy than we can currently demand. But the pope’s example of a spontaneous, zero-preparation, wedding is not at all what I and like-minded others have in mind. This couple undoubtedly gave more thought and attention to what they did by civilly marrying before a magistrate back in 2010 than they could have possibly given to what the pope suggested to them, on a few seconds’ notice, while at work, high above the Andes mountains.
If I have to say it, I will: I hope Podest and Ciuffardi are married and that they live happily ever after, but I worry whenever momentous life decisions are taken on a minute’s notice and under circumstances bound to contribute to one’s being carried away by events.
The pope has opined, apparentlymore than once, that “half of all sacramental marriages are null”. Here’s hoping that Podest and Ciuffardi beat those odds.