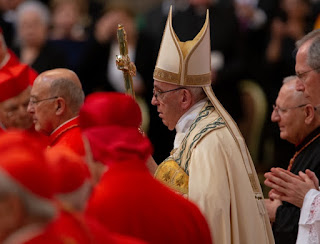 
1) At the top of the list of the 10 new cardinal-electors was Bishop Miguel Angel Ayuso Guixot. Born in Seville, Spain, the 67-year-old has been president of the Pontifical Council for Interreligious Dialogue since May this year, succeeding the late Cardinal Jean-Louis Tauran. Benedict XVI appointed Bishop Ayuso secretary (deputy) of the dicastery in 2012, and he has led various interreligious meetings, written numerous books and articles, and speaks a number of languages, including Arabic.

A former president of the Pontifical Institute for Arab and Islamic Studies in Rome, Bishop Ayuso was heavily involved in drawing up the  “Human Fraternity” document signed Feb. 4 by Sheikh Ahmed el-Tayeb, grand imam of Al-Azhar, and the Pope in Abu Dhabi. The Vatican called it “an important step forward” and a “powerful sign of peace and hope” between the two religions, but critics have expressed strong reservations about a passage in the document that stated the “diversity of religions” is “willed by God,” arguing that it contradicts a central belief of the Church by relativizing the uniqueness of Christ and the Church.


2) Archbishop José Tolentino de Mendonça, the archivist and librarian of the Holy Roman Church only since June 2018, is a Portuguese prelate who has had a meteoric rise. He was a priest virtually unknown outside Portugal until the Pope chose him to preach at his Lenten retreat last year. Born in Madeira in 1965, Archbishop Tolentino de Mendonça has a doctorate in biblical theology, and in 2011 he became a consultor for the Pontifical Council of Culture. Elevated to archbishop upon taking up his current post, he has published numerous volumes and articles of a theological and exegetical nature, as well as several works of poetry.

But he has also been a controversial figure who wrote the introduction to a book on feminist theology by Sister Maria Teresa Forcada. Dubbed by the BBC as “Europe’s most radical nun” and known for promoting “queer theology,” Sister Maria Teresa is pro-abortion, stridently anti-capitalist and for women’s ordination. In his introduction, Father Tolentino de Mendonça wrote that he believed her “apostolate” should be a model for a Christianity “free” of past and present dogmatic ties and that her value is to have “highlighted the importance of ethical relations free of rigid and codified rules.”

3) Archbishop Matteo Zuppi, whom Francis chose to be the surprise successor to Cardinal Carlo Caffarra as archbishop of Bologna in 2015, served as an assistant priest and then parish priest of Rome’s historic Santa Maria in Trastevere parish from 1981 to 2010 and then as assistant ecclesiastical general to the Sant’Egidio lay community in Rome. Benedict XVI appointed him an auxiliary bishop of Rome in 2012.

Known as a “priest of the streets” for his outreach to the elderly, immigrants, gypsies and drug addicts, he also participated in Sant’Egidio peace initiatives in Africa, in particular its mediations to liberate kidnapped missionaries and its successfully brokered peace deal in Mozambique and Burundi, working with Nelson Mandela. Popular among Italians, he likes to ride around Bologna on a bicycle, and his sensitivity to social issues is thought to bring him close to Francis. During his visit to Bologna two years ago, the Pope was reportedly pleased when the archbishop offered him a lunch with the poor of the city. Many on Italy’s political left received the news of his red hat with great enthusiasm.

Archbishop Zuppi has drawn criticism for writing an Italian preface to Jesuit Father James Martin’s book Building a Bridge in which he endorsed a new pastoral attitude for so-called “LGBT” Catholics. But Archbishop Zuppi's supporters have told the Register that his position is more nuanced than Father Martin has made it out to be (Father Martin described him as a “great supporter of ‘LGBT’ Catholics”) and that while the archbishop calls for a more sensitive pastoral approach in his foreword, he reasserts the Church’s teaching on the issue and calls faithfully Catholic outreach groups such as Courage “instructive.”

4) Archbishop Jean-Claude Höllerich, a Jesuit who was appointed archbishop of Luxembourg by Benedict XVI in 2011, is also president of the Catholic bishops’ conference in the European Union (COMECE). He has shown himself to be a kindred spirit to Pope Francis on a number of issues. In April, he made headlines by writing in the Jesuit journal La Civiltà Cattolica that European populists are playing a “wicked game” by exploiting people’s fears regarding immigration and security. The “drama” of migrants in Europe, he said, was a “disgrace” and that “to remove our fears we are presented with enemies: migrants, Islam, the Jews, etc.” He added that President Donald Trump’s former strategist Steve Bannon and Russian political analyst Aleksandr Dugin were the “priests of these populisms that evoke a false pseudo-religious and pseudo-mystical world, denying the heart of Western theology, which is God’s love and love of neighbor.”

He has expressed his full support for the upcoming Amazon synod, telling a conference promoted jointly by COMECE, REPAM (the Church organization set up in 2014 to prepare the synod) and the German Catholic aid organizations Adveniat and Misereor that the Amazon faces “a global problem which requires a global response.” He added: “We must immerse ourselves in reality, because it is in reality that we find God. And today this reminds us to care for creation, which requires a real revolution in custom, mentality and the economy.” At last year’s youth synod, the archbishop said discernment “is not about black and white, but discovering all the different colors and shades of reality.” A former teacher of seminarians and vocations director, Archbishop Höllerich has close links with the Church in Japan, having been a student chaplain and then vice rector at Tokyo’s Sophia University.

5) Jesuit Father Michael Czerny, who is the current undersecretary of the migrants and refugees section of the Dicastery for Promoting Integral Human Development, is another Jesuit cardinal-elect whose opinions closely match those of Francis. Born in the former Czechoslovakia in 1946 and a Canadian citizen, Father Czerny has long specialized in social justice and human rights. From 1992 to 2002 he served as secretary for social justice at the Jesuits’ General Curia and afterwards founded and directed the African Jesuit AIDS Network (AJAN). In 2005 he taught in Nairobi, collaborating with Kenya’s bishops’ conference. In 2009, Benedict XVI appointed him an expert at the Synod on Africa.

Often seen at justice and peace meetings or gatherings involving environmental concerns, Father Czerny’s influence grew when he was appointed a consultor for the now-defunct Pontifical Council for Justice and Peace in 2010. There he served, and continues to serve, as a chief adviser to Cardinal Peter Turkson, offering him advice on a wide range of social-justice issues. Francis has often relied on his expertise, making him a member of last year’s youth synod. He is one of the special secretaries of the upcoming Amazon synod and a leading figure in promoting the meeting’s narrative.

6) Among the new cardinals “on the peripheries” is Archbishop Ignatius Suharyo Hardjoatmodjo of Jakarta, Indonesia — the world’s most populous Muslim nation (in 2018, according to the CIA Factbook, Catholics numbered 2.9%, or 7.6 million of its population of 263 million people). Born in 1950, he was first appointed as bishop of Semarang by John Paul II in 1997 before Benedict appointed him archbishop of Jakarta in 2010. Considered to be close to the Indonesian state, he was re-elected for an unprecedented third term last year as president of Indonesia’s bishops’ conference because of an “urgent need” (he said he was unsure what the nature of the urgency was). He attended the 2012 Synod on the New Evangelization and the Synods on the Family. Francis appointed him a member of the Congregation for the Evangelization of Peoples.

7) Archbishop Juan de la Caridad García Rodríguez of San Cristóbal, Havana, Cuba, has been a bishop since 1997, when Pope St. John Paul II named him auxiliary of Camagüey. He became its archbishop in 2002, and one of his initiatives was to develop evangelization programs in which grandparents, who still remembered their education in Catholicism as children, taught the principles of Catholicism to their grandchildren. He also established prison ministries. He represented Cuba at the 2007 CELAM assembly in Aparecida, Brazil. Francis appointed him archbishop of Havana in April 2016. He has reportedly said he does not want capitalism to come to Cuba, but, rather, “a progressing socialism.”

8) As Cardinal Laurent Monsengwo Pasinya of Kinshasa — a former member of Pope Francis’ council of cardinals — turns 80 next month, the Pope has chosen to elevate to cardinal his successor in Kinshasa, Archbishop Fridolin Ambongo Besungu. Born in 1960, Archbishop Besungu, who is a Capuchin, will be one of the youngest members of the College of Cardinals. He studied partly in Rome, at the Accademia Alfonsiana, where he obtained a degree in moral theology, and has served as the president of the National Assembly of Major Superiors (ASUMA). After being appointed bishop of Bokungu-Ikela in 2005, he was chosen to be president of the Episcopal Commission “Justice and Peace,” after which he became archbishop of Mbandaka-Bikoro in 2016. In June 2016 he became vice president of Congo’s bishops’ conference. Pope Francis named him archbishop of Kinshasa last year.

9) Appointed bishop by Pope St. John Paul II in 1989, Bishop Alvaro Ramazzini Imeri, 72, was born in Guatemala City and has long been involved in social-justice issues, especially in the area of protecting the rights of indigenous people. In 2011, he was awarded the Pacem in TerrisPeace and Freedom Award for his courageous work to empower the poor and marginalized. Previous recipients have included Martin Luther King Jr., Dorothy Day and Mother Teresa. First ordained bishop in 1989, he was Guatemala’s bishops’ conference president from 2006 to 2008 and took part in the 2007 CELAM assembly in Aparecida where Cardinal Jorge Bergoglio played a leading role. Benedict XVI nominated him as bishop of Huehuetenango in 2012.

10) Lastly, the Pope chose Archbishop Cristóbal López Romero of Rabat, Morocco, as a new cardinal. Born in 1952 in Vélez-Rubio of the Diocese of Almería in Spain, the Salesian priest studied in Barcelona and obtained a licentiate in information sciences in the city’s School of Journalism in 1982. From 1979 to 1984 he was known for his pastoral ministry toward the marginalized in Barcelona, and from 1983 to 2003 he served as a missionary in Paraguay. From 2011 to 2014, he was head of pastoral parish and school ministry in Kenitra, Morocco, before serving as Salesian provincial in Bolivia from 2011 to 2014. Francis appointed him bishop of Rabat in December 2017.